Last week, I wrote about the easiest way to make a book: fold a piece of paper in half to arrive at a very simple book. Add a few more of such folded sheets to make a pamphlet-style book. But why would one have to fold the paper? After all, you could simply stack a few sheets of paper, somehow hold them in place, and you’d have a book as well. An obvious idea for holding the pages together would be to use a hole punch, and to insert them into a binder. Lest you think I’m being a bit flippant here, this is the model used for Lee Friedlander’s The American Monument. 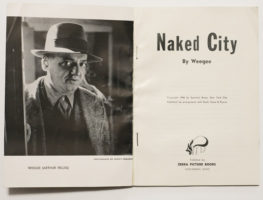 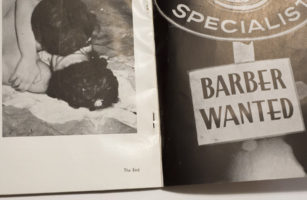 If you don’t like the idea of the binder (which references the way very old photo albums used to operate), you could also run some staples through the stack of paper. The staples would clearly hold everything together. And again, I’m not being flippant here. I own a 1945 abridged softcover version of Weegee’s Naked City that was produced this way. Its cover, a just very slightly heavier paper stock, wraps around the stapled stack of paper (see pictures).

Mechanical solutions such as these two options do their jobs, but aesthetically they’re not overly attractive. Of course, you could say the same about the spiral. But there’s another option to bind books using the same principle, which has a long tradition in Asia: stab binding. In a nutshell, instead of a hole punch and a pre-made binder, you make a series of smaller holes through the pages, and the book is held together with binder’s thread. Just like in the case of the spiral, the binding itself becomes very prominent. But instead of a metal/plastic spiral/coil, here you see the thread, which not only holds the book together but also adds a sense of ornamentation.

Unlike in the case of the spiral, stab binding introduces a limitation to the book. You can’t really place the binding holes too close to the edges of the paper — otherwise, the structure would become unstable: opening the book would produce too much of a stress on the material. Consequently, you lose a part of each page to the binding. When you open the book, a small part of each page is simply invisible — it disappears in the gutter. Thus, if you want to use images that cross the gutter you have to plan very carefully how to do it.

What is more, unlike the spiral-bound book, a stab bound book will never lie flat. In fact, you usually need to use both hands to even look at such books because the binding adds an element of stiffness to the book. You can get around the stiffness by using very thin paper. But printing photographs on very thin paper is not very simple, unless you employ the kind of trick commonly used in Asian books: pouch pages. A pouch page essentially is a folded piece of paper. Unlike in the case of the pamphlet where the folding creates a set of pages, here the folding merely hides the parts of your page where an image shines through to the other side. Now, a folded piece of thin paper (one side of which you’d print on) still can be more flexible than a thicker paper that would allow double-sided printing (this idea might come in handy if you want to make such books using an inkjet printer in your studio). 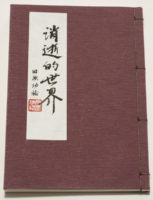 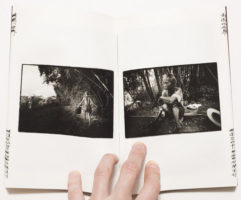 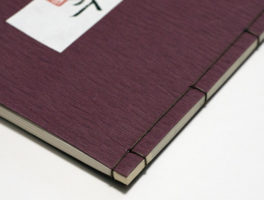 The stab binding example I discuss in Understanding Photobooks is Daisuke Yokota’s Linger. Of all the books this photographer has made (I’ll admit I’ve lost track), I think it’s still by far his best. Another example is provided by Kosuke Okahara’s Vanishing existence (to be precise, the regular edition, there also are two other editions). This particular book is maybe an even better example of stab binding. Unlike Linger, Vanishing existence uses pouch pages. The paper is not very thin, so the whole book requires both hands (for the picture, I made do with one to be able to operate my camera, but it was quite awkward).

The book’s spreads contain smaller pictures, usually in pairs, but there are also pictures across the gutter. Such careful attention to detail was placed here that those picture can be enjoyed fully: details might get very close to the gutter, but they don’t disappear in it. In addition, text was printed across the part of each sheet of paper where it would be creased, which produces an intensely beautiful detail. With a focus on leprosy villages in China, the book very clearly is situated in Asia, and its form and content come together perfectly. It’s a real treasure of a book.

OK, so these two books clearly have a strong connection to Asia, easily justifying the binding. What else could you use this binding for? There is one other aspect of the binding that I have ignored so far. With stab binding, you can also mix different types of paper. If you wanted to, you could stack any combination of papers. Given the binding involves hand work anyway, mixing papers doesn’t necessarily make it more complex. 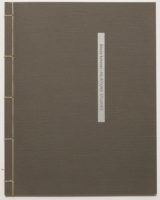 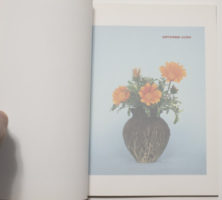 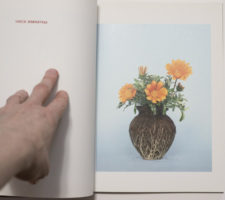 This brings me to Diana Scherer’s Nurture Studies. For the project, the artist grew flowers from seeds in a set of vases. Once fully grown, the vases were removed, leaving the soil and roots which would still carry the vases’ outlines. The plants were then photographed on monochromatic backdrops. The book contains these photographs. For each photograph, there is date given, which is printed on a vellum-style paper. With its very reduced aesthetic, Nurture Studies clearly references classic books on Japanese flower arrangements. And this reference is clearly reinforced through the binding. Added bonus: the binders thread on the outside also references the tangles of roots in the soil.

So all of these books are very specific in their intent, and that intent is made to work with the binding (as it should be). In a sense, stab binding is a great way to make books that are even just aesthetically intensely pleasing. Of all the binding types I can think of stab binding is the one that commands most attention on its own. However, the books discussed here do clearly reference a very particular tradition, which in combination with the hand-made factor doesn’t really work for a lot of photography (I couldn’t imagine, say, a Becher water tower book done this way). Like any type of binding, stab binding is just waiting for its right application.