I recently wrote about the exhibition catalog and the limitations of this particular format of photobook (see the article here). I personally rarely, if ever, see the need to add a catalog to my collection unless it offers more than the very basic ingredients of what makes a catalog a catalog. But this is where the ebook comes in. For a while, the idea of the ephotobook was all the rage. The hype over such books has calmed down considerably, as its many limitations have come apparent. These include, for example, a possible dependency on the whims of corporations such as Google or Apple, whether concerning technical aspects or the often grotesquely puritan restrictions concerning content. But the ebook still has a lot to offer, and it’s in the area of the catalog where it might fulfill its potential most easily.

To begin with, a basic catalog is a collection of pictures plus some essays. Basic catalogs don’t offer any of the bells and whistles that make their more extravagantly realized examples so exciting. Turns out the ebook is perfect for basic catalogs as is being aptly demonstrated by the e version of the one made at the occasion of Stephen Shore’s career retrospective at MoMA. Lest you get confused, the book is accessible through either a browser-based interface or a stand-alone app (I’m using one on an iPad mini). In both cases, the navigation is essentially the same — nothing fancy and thus possibly confusing. The user can switch between a view of the physical catalog’s spreads and text and images displayed on their own, with a zoom function for images supported.

If this sounds fairly bare bones, in a sense it is. But it also supports the idea of the catalog perfectly: you get easy and simple access to its information through a set of menu options that make finding something actually a tad less tedious than in the case of a book. Given my concerns about the catalog format per se, Musebooks — the company behind the e version of the catalog — appear to have thought about both what such an entity should be able to do in an electronic form and how to prevent the kinds of problems run into by other ebook makers. If you read magazines on your tablet through an app like Zinio or if you use iBooks (or a non-Apple equivalent), you’ll be familiar with accessing content this way — there’ll merely be another app to install (which worked like a breeze).

I might thus end up adding very conventional catalogs to my collection after all. But they won’t take up any space, and they will exist in that “space” that I use for my professional work. Having a set of electronic catalogs at my disposal actually sounds like a pretty good idea. I’m hoping that these kinds of catalogs won’t follow in the footsteps of many of the other ebook initiatives we have seen in photoland over the past decade. I guess time will tell. 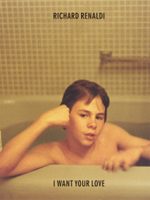 Those who think they know what to expect when buying a book by Richard Renaldi will have their expectations shattered by I Want Your Love. Widely known for his view-camera portraiture that occasionally expands to landscapes or cityscapes, this new book is one of those Super Labo books that allows its author to move beyond the usual. I personally think such a move is always a good idea. There’s nothing worse than to get stuck in an endless loop of doing what you know well, doing what everybody has come to expect.

In this particular case, the photographer decided to produce a visual autobiography: the book features ample photographs taken by a variety of sources — family photographs, snapshots by friends, the author’s own (non-view camera) ones — plus a selection of pithy and despite (or maybe because) of that very touching personal pieces of text in which Renaldi talks about growing up, discovering his sexuality, entering and leaving relationships. The writing possesses an unassuming effortlessness that those who write much and/or often usually struggle to achieve.

The writing is not just perfect for the photographs it comes with, there also is none of the pretense that makes so much of what artists in general produce about themselves so tedious. The text is conversational without feeling strained or too loose, and it sits very well next to the photographs that describe a life in those ways that a smartly edited assortment of mostly unassuming pictures does: it’s almost as if the reader/viewer is literally sitting with Renaldi, to hear the stories instead of reading them. No mean feat.

Right at the end, there is a reveal of sorts, the motivation behind the production of the book. The final lines of text are “My mother had a long and painful demise, and in many ways I think she left us in that hospital room in suburban Chicago long before she died. As I approach fifty, living an active life as an HIV-positive man, those issues of health and mortality move closer and closer to my center.” The camera can only do so much for you as the maker of photographs. Even as other people, your viewers, might draw considerable gains from your pictures, for you, the maker, they can only briefly — if even that — conceal your larger concerns, or make you forget about them.

Whether or not we will cry out for our loved ones when our time has come — just like Renaldi’s mother did, we won’t know until those moments. But our pictures are little gestures of doing just that, of reaching out to strangers to get something back: their approval, their enjoyment, their love.

I Want Your Love, photographs and text by Richard Renaldi; 176 pages; Super Labo; 2018