There are plenty of photobooks showcasing archival materials. In fact, the use of archival materials has become common even beyond producing mere collections of them. Whatever they might be, whatever their origin, their patina creates an instant attraction for a viewer. In the Benjaminian sense, archival materials clearly possess an aura, an allure, even if they consist of mass-produced items.

Having archival materials at one’s disposal is one thing. Doing something smart with them is entirely another. Some archives don’t need any extra work. They will do all the lifting. For example, Erik Kessels has deftly and smartly worked with such materials. Of course, for every book featuring, let’s say, a wife standing in water fully dressed, there probably are many albums or collections of pictures that did not make it. In other words, Kessels is more than a publisher of intriguing archival pictures. First and foremost, he filters out all the stuff that can’t make the cut.

So there are two aspects to archival materials, their inherent quality and the ability of whoever finds them to distill them into something worthwhile — if that is possible. I feel the latter is usually being neglected in discussions of such materials. Often enough, when a photographer struggles with a project some archival materials are being added to it — as if such materials had the magical ability to do the lifting. But they don’t have that. At best, they will divert the viewer’s attention from what’s not working, an effect that is bound to last only so long.

Andrejs Strokins has been working with archival materials for a while. He is probably more well known for his own photographs, for example the idiosyncratic Cosmic Sadness. But Strokins has also been collecting photographs, some of which he used for collages (to learn more about him, read our conversation). He just published his first book featuring photographs from an archive, entitled Palladium. The archive centers on Latvian Soviet-era movie theaters.

It would be tempting to imagine the book as the end result of the kind of treatment such material often gets, especially if it’s in the hands of someone who never had to live under Soviet rule. I’m not sure how I can succinctly describe what I see as the usual approach, but it’s a mix of “isn’t this weird?” and “isn’t this somehow cool?”. It essentially is a form of othering the past of a sizeable part of the world, which not only turns a rigid dictatorship into something entertaining but which also belittles and demeans the past and present lives and experiences of those who had to live under it (mind you, in Western contemporary photography this problem isn’t confined only to using archives as Romain Mader has demonstrated).

Palladium avoids this pitfall. Given that the movie theaters in question appear to have been used for more than only showing films, the book weaves in and out between the world of movies and the larger world of a communist society with its strange rituals (which in actuality aren’t any more strange than what we witness in Western societies, but that’s a topic for a different day).

Thankfully, Strokins also brought his own unique sensibility to the edit, often picking the most stubbornly odd pictures, pictures that it would have been all-too easy to reject as failures. Consequently, there is a strong line of somewhat disturbing deadpan humour running through the book. As a counterpoint to what might be seen as “cool” or “weird” it’s a very effective device. The world of Latvian Soviet-era thus becomes a strange theater of the absurd that, for this Western viewer, breaks every expectation it sets up almost immediately. 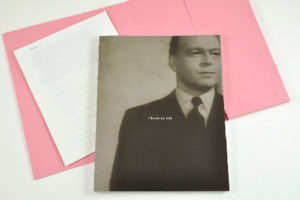 Some things are just too awful to consider, at least for people with a well developed sense of decency and compassion. But that sense can be undermined, or it can be sidelined. Joachim Fest‘s biography of Albert Speer centers on this very aspect: how was it possible that an otherwise highly cultivated and intelligent man could have made himself a very integral part of Nazi Germany’s machinery of annihilation? As Fest discovered, there is no real answer. There are only the mental mechanisms at play, which allowed Speer to think about rebuilding Berlin, while having Jewish people getting evicted from their homes slated for demolition. It’s a version of “out of sight, out of mind,” which for its victims meant a lot more than just that. And it’s the very same mechanism of institutionalized cruelty that is being applied on a daily basis in many (most?) other countries as well. Fest concludes that the likes of Speer are the ones we should truly fear, besides the Hitlers, and I think he has a point.

Once you have somehow convinced yourself that something isn’t your problem and that people at the receiving end of an injustice ultimately only have themselves to blame, you’ve placed yourself on a spectrum of awfulness. On that spectrum, you might tell yourself (and others) that poor people deserve to be poor because they’re lazy, that children who have never known another country should still get deported from it given they don’t have the right passport, that it’s OK to keep “evildoers” in an extraterritorial and extralegal prison, that those afflicted with mental illness should be euthanized (which also saves some money), or that entire groups of people deserve to simply die simply because of their religion or tribe or whatever else. These different examples are not equivalent. But they’re all located on that spectrum, which gets more and more and more awful, and which wouldn’t operate at all if it weren’t for the Speerian mindset that in some form we all carry within us.

The Nazis called the killing of the mentally ill Aktion T4. Thousands of people perished, with their next of kin usually being told that there had been some (made up) medical cause. Gerhard Richter painted one of these victims, his aunt Marianne. There exists a haunting book about the story of Marianne, and Richter’s coming to terms with it, which, unfortunately, is not available in English translation. If anyone ever can come to terms with something like that is not clear. And in light of the various other atrocities committed by the Nazis, Aktion T4 is one of the minor aspects of that time — minor of course only in terms of the numbers involved.

Can there be a photobook made about Aktion T4? How would one go about it? Dieter de Lathauwer attempted to do just that, with I loved my wife (killing children is good for the economy). Using a combination of his own and archival photographs, the book centers on the awfulness that sits at the center of this particular mass murder. In a very strict sense, the book doesn’t really tell you anything. No photograph or group of photographs could ever convey the awfulness in question, neither could a painting, a piece of text, … But the book gets very, very close, leaving a feeling of deep dread, of pain, of something truly obscene happening in an otherwise perfectly ordinary world.