If we all saw the exact same things in photographs, the medium would be a lot less interesting than it actually is. As infuriating as disagreements over what a photograph shows can be, they also have the potential of bringing us closer to seeing the world with someone else’s eyes. In a world more and more divided into petty tribes that are at war with each other — whether literally or metaphorically, photography thus has an important role to play.

But photographs don’t just show us different things because of our interpretations. As individuals, we also don’t all see the world alike: “Neuroscientists have discovered that women are better at distinguishing among subtle distinctions in color, while men appear more sensitive to objects moving across their field of vision.” Turns out our brains process the visual information that they receive from our eyes in a surprisingly complex way. The late Oliver Sacks wrote about a painter who as a consequence of some damage to his brain lost the ability to see in colour. His world had become fully black and white. Something similar happened to Brian Ulrich, albeit temporarily, after a bike accident (see my interview with him). I have always been infinitely fascinated by these kinds of stories, simply because I am so curious about what it would be like to see the world differently.

Sacks also wrote a story about an island where colorblindness is a lot more common. Chances are you are familiar with red-green colourblindness, which is the most common form. Total colourblindness, where you only see in b/w, is rare (something like 0.0025% of all people live with it). But just like in the case of the painter, it exists. On the “island of the colorblind,” it’s a lot more common, with roughly 10% of its inhabitants living in a grey-scale world.

What makes this all interesting is an unsolvable riddle: you can imagine what it would be like to see the world differently, but you will never be able to actually get there. For me, this realization boils down to the fact that the emphatic aspect behind these kinds of stories is always a lot more interesting than the informational one. Even if you look at, say, a b/w photo knowing that that’s how a completely colorblind person would see, the world around that picture inevitably has colour (unless you’re colourblind, in which case obviously you wouldn’t need a demonstration what the world looks like if you were colourblind).

Seen that way, Sanne de Wilde‘s The Island Of The Colorblind is an exercise in futility (you’ll notice that the book’s title uses the American spelling of “colour”). But it’s great because of exactly that. There have been various bodies of work lately where artists modified the colours in their photographs for effect. For example, there is David Benjamin Sherry’s Climate Vortex Sutra, plus an assorted number of other New Formalists. Richard Mosse also has employed similar devices, raking in one photo major prize after another (see my take on Incoming here). Collectively, though, I don’t think these other projects amount to much other than visual exercises. This is why De Wilde’s work interests me so much. Unlike in any of the other cases, her subjects actually do see the world differently. There is an actual bridge to be crossed. 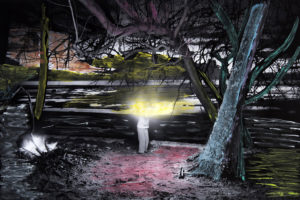 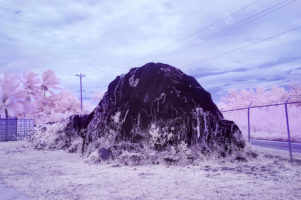 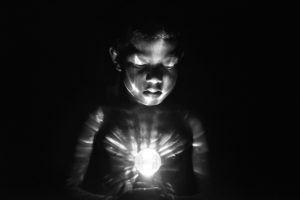 If all you had were De Wilde’s imagery, you might take them as another case of New Formalism. Visually, many of the photographs look that way. But the fact that there is something in the real world that it’s all connected to has me interested. This is not to say that I don’t enjoy art made for its own sake. I even enjoy photography made with the purpose of looking into the medium’s machinations. But for me, and I can only speak for me here, there needs to be more than a grad-school-style exercise. To go back to my old go-to criterion, there need to be something at stake.

And there is in De Wilde’s case. The book itself, with its inclusion of a variety of text (the interviews remind me of some of Sophie Calle‘s work), truly brings the pictures to life. Without the text, the jumble of imagery, with its various variations of colour (and lack thereof) might remain that. With the text, especially the interviews, the strange colours acquire an urgency and purpose — an urgency and purpose not rooted in the artist saying (or pretending) so, but one rooted in someone else’s experience.

The book pulls all the various stops contemporary photobooks have at their disposal. Beyond design, there are various production choices, including different types of paper and even some UV-sensitive ink printed on top of the cover. Maybe some of this could have been dialed back a bit. But all in all, I think the book showcases very well what a photobook in 2017 could (maybe should) be: an engaging object where its makers are not afraid to use its basic properties to help produce the overall engaging experience for its viewers.