There is a photograph by Vanessa Winship that I could not live with, whose presence in my home would probably challenge me too much on a daily basis. It’s a photograph from she dances on jackson, and it shows a young couple (thankfully, the book has now been reissued; I reviewed the book in 2013).

That they are a boy and a girl or — almost — a man and a woman is barely betrayed by the shapes of their bodies, their hair, or their faces. They’re very young. The passing of time has not yet etched ravines of discontentment into their skins: they’re not quite aware of what the future might hold. They both meet the camera’s mechanical gaze straight on, looking into and beyond its lens, the girl being more self-assured than the boy. Her left eye’s brow is slightly raised, as if to assert some sort of autonomy, some sort of knowing what lies ahead. But they don’t know. We all don’t know — so how would they?

Here is what gets me about this photograph: There are this young couple’s hands. It is partly the hands and what they do with them that has me not wanting to live with the picture. It would be too much. 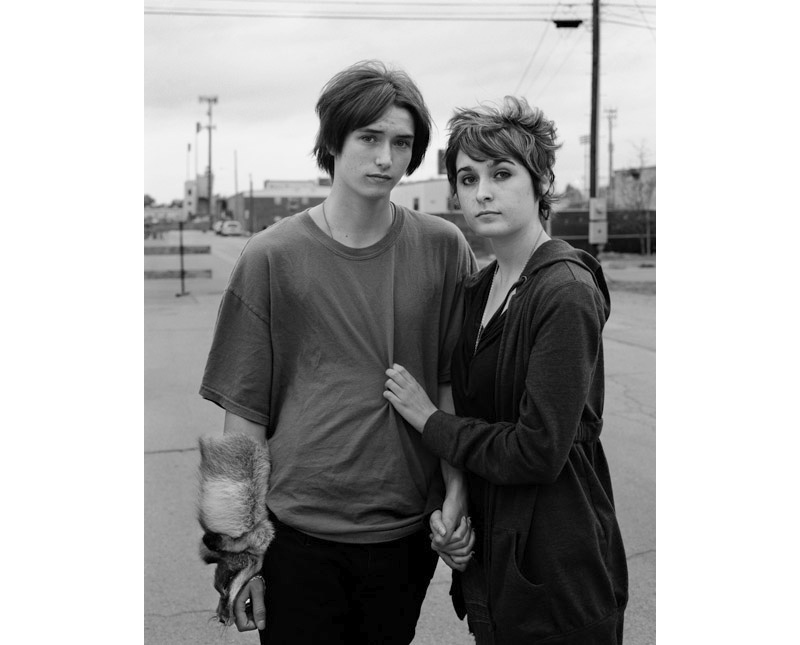 To begin with, the boy and girl hold hands, her right and his left hand clasping each other, the two young bodies drawn towards each other. The fingers are not interlocking. But they’re holding each other, and they do so tightly. The position and orientation of their bodies stresses this embrace: we two belong together. To affirm that stance, the girl’s left hand rests very lightly on and against the boy’s chest, grasping his t-shirt in the lightest possible way: there’s a fold running down the shirt, and she has that fold running in between her index and middle finger, her thumb asserting just a little pressure. It’s gentle gesture of possessiveness. You are mine. I really like and care about you. In contrast, the boy’s remaining free hand, his right, is left to merely hang next to his body. There’s an animal skin — a fox’s? — wrapped around his wrist, a symbol, possibly an expression, of wildness, a wildness which, however, is more a desire than a reality.

In an obvious sense, this photograph speaks of young love, of two young people having met and now clinging to each other. But there also are elements of doubt and uncertainty in the photograph, which I see as not only concerning the future of their relationship (this too shall pass?) but the future in general. It is that doubt that gets me. I know I have some grasp on the future — less than I’d like, though. But I don’t know if I would want to be exposed to that fact every day. It’s not even that knowing it makes me uncomfortable.  It’s also that I wouldn’t want this discomfort to become part of the daily decorations I am surrounded with.

If I had to describe Winship’s art it would probably center on the idea outlined above: it’s very gently outlining some very hard truths. she dances on jackson has none of the machismo that run through so many America road-trip projects, Robert Frank’s The Americans being the most obvious example. There is nothing particularly wrong with the machismo per se; Frank’s work clearly derives its power from it. At the same time, it is that very machismo that is partly responsible for making The Americans a dead end for this particular photographer, a dead end from which he never managed to extricate himself (the other part being provided by his biography).

As a countermodel of The Americans, she dances on jackson offers a different perspective of what the American road trip could be, a somewhat amorphous and very powerful sense of dread and sadness. It might be just a tad too convenient to conclude that Winship’s biography informed this result, with her father’s ill health hanging over the trip. Ultimately, she had to return home, cutting short her trip, to be with him when he died just a few days after her return. When I first saw the book, I sensed something might have been afoot, but I didn’t know. Still, the book did and does feel very Winshipian, and what that means — Winshipian — can now be seen in the catalog that accompanies a retrospective at Barbican Art Gallery (obviously, it can also be seen in the show by those able to visit), And Time Folds.

The book reveals Winship’s particular sensitivity, that very gentle outlining of hard truths I spoke of earlier, just as much as her not standing still as an artist. In fact, the different projects are actually quite varied, with a range of approaches, some bordering on photojournalism while others are incredibly still. Yet these different photographic approaches notwithstanding, there is the photographer’s sensitivity that keeps shining through. More often than not she seems to be drawn to those who still have their future ahead of them, as if to show her audience that the very same is true for all of us. Of course, this is a trite statement, but its triteness doesn’t mean it’s any less true: from tomorrow — or maybe even from now on — I can be a better, a different person.

Set against this very basic and simple idea are depictions of what surrounds us, the often harsh landscapes and dilapidated hellscapes we call our cities. Those are “easy” to photograph. But it is the adding of the very different human element that brings forth this particular photographer’s voice, a voice that, as I noted above, differs from the still so prevalent machismo in the world of photography.

Over the past years, it has become overabundantly obvious that the range of voices we are being able to view have to expand beyond the usual Western white males. I’ve said this before, and I will do so again here: there is something to be gained from doing that for all of us. We need more voices that speak of the human condition beyond the often angry white male’s. We need to be able to see what can be gained from being able to listen — especially now that our larger cultural and societal fabric has become so torn as a consequence of the aggressive, angry white male exploiting and degrading our democracies.

Thus, And Time Folds is a timely book not just for a history of photography that begs to be more inclusive. It also is a book that shows us a different approach to describing some of the world’s biggest problems. These problems are being caused by people. There is much to gain from looking at and engaging with them.