The history of photography is filled with photographers trekking across the United States to capture the country’s essence (or their version of it). If you started with, let’s say, Timothy H. O’Sullivan’s King Survey Photographs

, you could jump to Walker Evans’ American Photographs

, continue with Robert Frank’s The Americans

, and you’d arrive more or less today. You could replace one or the other, even though, I’m sure, few people would want to replace either Evans’ or Frank’s books. You could add work here and there easily, filling in gaps left by me taking rather big steps.

For example, I could make an excellent case for including Richard Avedon‘s Nothing Personal, a book that breaks with the ideas that a) you need to do a road trip to produce a book about the country, and b) you somehow disqualify from being part of such a list just because you happen to make a lot of money as a fashion photographer. Avedon’s book certainly is as punchy as Frank’s, albeit in a very different way. One could also add books such as Dorothea Lange’s An American Exodus: A Record of Human Erosion

, making the case for work that is less interested in the vast picture and more in looking at how the country’s people are doing.

At the risk of painting with a somewhat broad and simplified brush, with the exception of Lange’s none of the books in the list above is particularly concerned with the people who happen to be where the photographs were taken (here and in the following, I’m going to focus on books made in the 20th century). The people are mostly reduced to characters that happen to be of good use for a picture. For example, in Frank’s book, the only image that makes you feel the photographer cares about his subjects is the one of his own family in the car. And that’s fine. But still, it leaves me wanting. What is the country without its people?

What’s more, as much as I appreciate the books I listed above (some of them more than others obviously), none of them gives me the feeling that when getting out of the car, the photographer would actually shut off the engine (I’m speaking metaphorically here). You can hear the sound of the engine in the pictures, the desire to make the picture and to then move on, because, after all, that’s the idea of the road trip. But still… With the engine running, will you hear any of the sounds drowned out by that mechanic noise? Will you be able to fully take in the atmosphere? Artists project their ideas onto the canvas that is the country, but wouldn’t it also hurt to sometimes just listen? 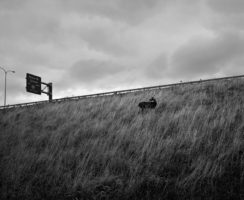 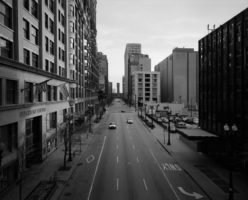 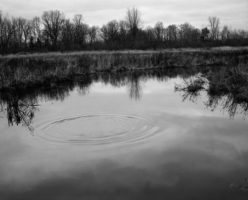 The very first thing I noticed about Vanessa Winship‘s new She Dances on Jackson was that it is a book filled with pictures that feel like someone was listening, in fact listening very carefully and closely. Someone listening not just to the loud cheers in the football stadiums or the ubiquitous roar of the traffic or the endless chatter on cell phones, but also to those silent moments in that cacophony of noise, to the quiet lament that has been hanging over the country for the past ten years.

What happened to the American Dream?

The US are a country rich in symbols, and many of them found their way into the book. But they have all been transformed. A landscape might contain a road, but instead of stretching away from the camera into a seeming infinite distance, here is stretches from one nowhere to the left to another nowhere on the right. Or Evans’ signage meets Shore’s view of the city, to only fall apart into an apathetic scene, drained of life, exhausted. The infrastructure is shown crumbling, as are most of the buildings. If there are any effort to be made to preserve or re-make something – those are largely absent from the book.

In this rather desolate land we encounter people. Winship is a magnificent portrait photographer. In She Dances on Jackson she continues working with young people, creating a stunning number of utterly arresting photographs. A little more than halfway into the book, we encounter one of the key portraits in the book, a young couple. The young man (still more a boy than a man really) and woman are holding hands, and her left hand rests on his chest, with a crease of his t-shirt in between the index and middle finger. The young man appears quite a bit more fragile than his girlfriend, who seems to put a claim on him. Even though their eyes meet the viewer’s it is hard to guess what might be going on in their minds; it’s tempting to see worry, a bit of uncertainty and a hint of defiance (isn’t that the signature of youth, that you still defy the world?).

This hints at what makes the portraits so strong and this book so convincing. It would have been tempting to produce a sad-sack tour of the troubled land, with jobs gone and people struggling to get by. But there always is that hope or that defiance that you have when you’re young. You don’t really know what is going to happen, but it’s going to be alright. You’ll make do, one way or the other.

She Dances on Jackson; photographs and short text by Vanessa Winship; MACK; 2013