A few years ago, we witnessed a boom in self published photobooks. A huge number of emerging but also established photographers decided that they wanted to take on all aspects of making and publishing a photobook themselves. For me, the most exciting outcome of the boom were the widely felt senses of possibility and experimentation that the staid area of photobook publishing suddenly experienced. However, even if there now are a small number of publishers that have retained those senses (Hans Gremmen’s FW:Books is my go-to example), unfortunately since the end of the boom the world of photobook has become a bit boring again.

I am fully aware of the fact that publishing books is a very risky business. So if you have arrived at a model that works, then there’s no good (business) reason to change it. Still, I feel that a photobook produced in, let’s say, 2022 ought not to look and feel like a photobook in 2002, simply because in those two decades a few more possibilities might have opened up. Thus, mine isn’t a capitalist argument (dress up the same thing in new packaging, hoping to sell some more). Instead, I’m concerned about the book itself and what it can do for its audience. As Hans Gremmen and a few other publishers continue to show, you can make a photobook that looks and feels contemporary even when the source material is very old. That’s the way it should be.

The above will not surprise anyone who has been following this site for a while. I have insisted on not producing Tupperware style books for a long time, arguing that if you view your book as some random container, then that’s not going to help your pictures. Of course, there are all those people who will say that a photobook should be all about the picture. Nothing should be allowed to take any attention away from those. But do those people actually understand that a photobook is its own medium? You don’t read a novel, expecting to look at the words, do you? I know, these kinds of comparisons aren’t ideal; but I’m sure it is clear what I’m trying to get at. 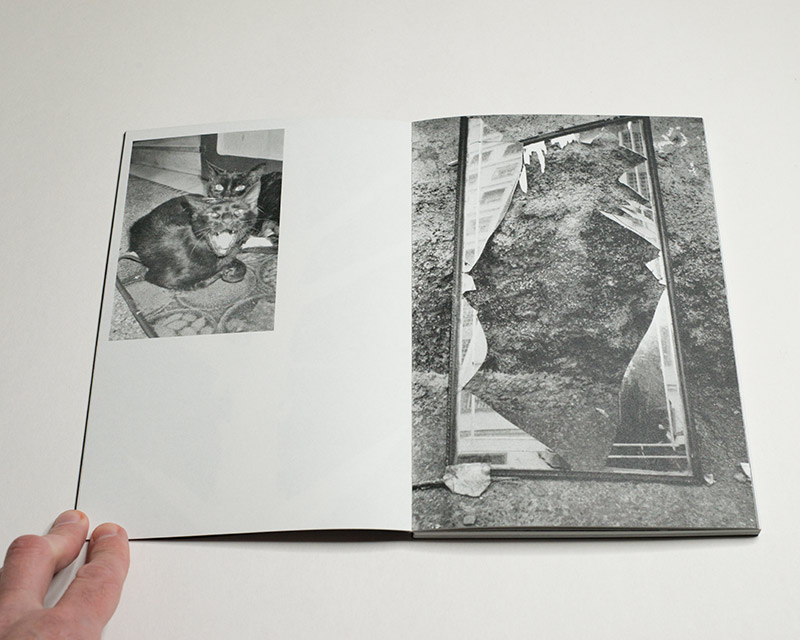 I had to think of these aspects of the photobook again when I received Abdo Shanan‘s self published Dry in the mail. The book and an accompanying booklet are held together by a wrapper (described on the photographer’s website as “a three flaps black jacket”). There’s the black silhouette of a barren tree printed onto its black card stock. Open the first flap to encounter the words “How is it possible for an Island to exist in the middle of an Ocean?” Open the second flap to see the book itself: its outer cover is black as well. Inside the wrapper, there are three photographs (printed with silver ink), which look archival and which are hard to make out. There are a man, a woman, and a group of people (they look all male, but it’s impossible to be certain).

There are black sections at the beginning and end of the book as well. As on the wrapper, silver ink was used to print photographs on it. The viewer first encounters an interior, a stair leading down somewhere, a closed door, a gate, a cemetery, a hand reaching into some foliage, and lastly (and much bigger) what might be the edge of a jungle. It’s all very mysterious and intriguing. The first page of the following section (using white paper) contains the title page. Afterwards, the book presents a combination of black-and-white and colour photographs (answering the eternal and eternally boring question: can you combine these two types of pictures? with: of course, you can if you do it well).

I’ve looked at the book a few times, and the mix of what is being shown still surprises me. To begin with (this will satisfy the most conservative members of photoland), there are a lot of great pictures. Furthermore, the editing and sequencing has been done really, really well. You’ll have to remember: as someone who hasn’t looked at the book and who thus knows nothing about it, the book needs to reveal itself in a way that won’t make you put it away. It really does, and it does it in a way that wants you to look at it again and again. 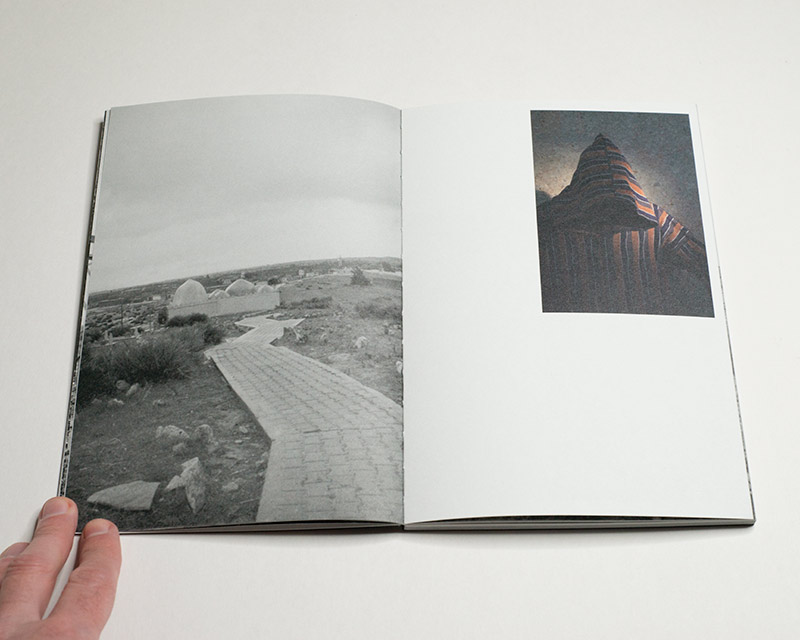 The use of the portraits is very intriguing. More than once, the same person is shown in two different photographs — this is a technique Michael Schmidt used in Ein-Heit to great effect. It’s startling to see the same person again. At some stage, you encounter a short quote, which doesn’t tell you all that much (which only adds to the mystery). A few pages later, there are more quotes. They continue underneath the photographs, a number of portraits of people with a variety of skin tones. The first quote reveals the book’s topic. It begins with “I wouldn’t be able to live in Algeria permanently.”

The selection of short quotes centers on what that might mean — Algeria, a country with a colonial past or being Algerian. “[T]here is no such thing as a homogeneous Algeria,” the final quote in the book concludes. It is placed opposite of a portrait of a man who decided to lean outside of the frame. There merely is a sliver of his beard left.

When I first looked at the book, I didn’t read the quotes. As a bookmaker, you cannot control how people decide to encounter what you’ve made. Even though I was unable to tell where exactly the book had been photographed (I’d learn that later, reading the text), the overall idea of the book was communicated very strongly to me. You can see it. This is what I want in a photobook. 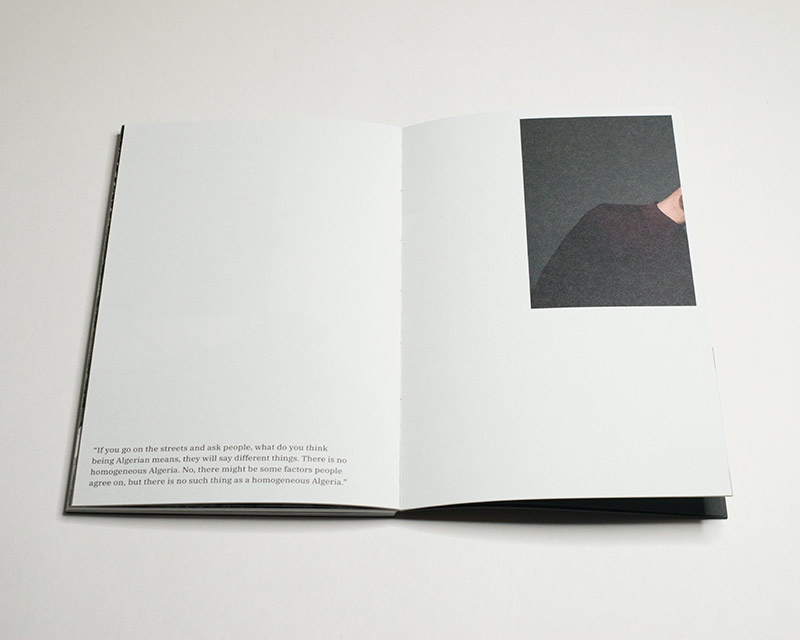 It’s not that I mind reading text (quite on the contrary). But if you can visually communicate the idea of your book — a sense of displacement in the environment that in principle you should feel completely comfortable in, then that’s great. It’s great because this sense might be shared by people in other parts of the world as well. Algeria is merely one of the many countries with a colonial past. Furthermore, questions of national identity and belonging are now also wracking the very countries that are responsible for the mess they left behind in their former colonies.

Thus, Dry is a book of and for our times. Those who want to learn more about Algeria can read the booklet. Therein, excerpts from Karima Lazali’s Colonial Trauma: A Study of the Psychic and Political Consequences of Colonial Oppression in Algeria are reproduced. “For centuries,” part of it reads, “Algeria has been the site of many conquests and of battles fought against the Carthaginians, Romans, Vandals, Byzantines, Arabs, Turks, and the French. Each of these upheavals has had an impact on the habitus and languages of this land’s inhabitants for many generations.” For most Westerners, this is something that would have to be imagined. For people in many other parts of the world, this forms the background of their culture and society.

There are no other books listed on Abdo Shanan‘s website, making this a very, very impressive debut photobook. I’m hoping it will be seen and appreciated widely, given the relevance of what it covers and given how well it was produced.