The Masterclass franchise is now offering a class entitled President George W. Bush Teaches Authentic Leadership. I’m going to assume that the class will not be of interest to readers of this site. Still, the outline of the class is a sight to behold. Part 6 of the Lesson Plan covers “Accountability Leads to Results”: “When developing a plan, leaders need to create outcomes that are measurable, and the right people need accountability.” I don’t know when Mr Bush came to that realization. For sure, it must have been after he left office because the “achievement” he will forever be known for, the wars in Afghanistan and Iraq, didn’t involve any accountability (and neither did the fact that under Mr Bush’s lead, people were tortured).

Thus, now the former president is enjoying a cushy retirement and a good life — unlike the thousands and thousands of people who still have to deal with the consequences of the most disastrous foreign-policy decision in our life time. These people include American service members just as much as the citizens of Iraq and Afghanistan. In the latter case, the hastily and poorly executed withdrawal of all foreign forces last year — initiated by the previous and carried out by the current president — resulted in a humiliating spectacle that inevitably was compared to the end of the Vietnam War. Furthermore, yet again the people of Afghanistan have to live under the very medieval regime that Mr Bush had promised to root out. 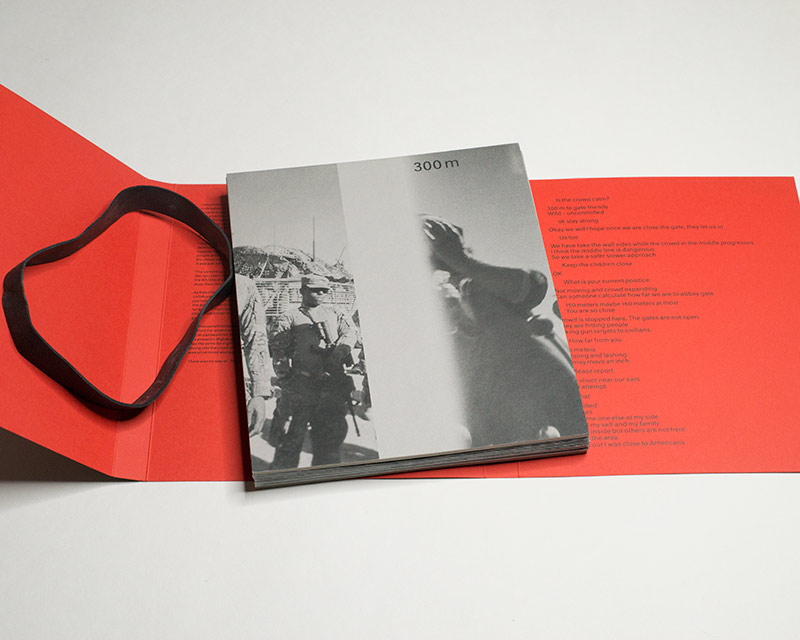 Last summer, as the withdrawal from Afghanistan unfolded and image and videos of scenes of despair were flooding all screens, I thought I’d get in touch with Ben Brody, a former student and now friend whose Attention Servicemember is one of the best photobooks about the era (I reviewed it here; it’s also discussed in this article). Ben didn’t have much time to talk. He told me that he was spending all of his time trying to help people stuck on the ground in Afghanistan remotely. I would learn later that there were many people in the US and Europe trying to get people out of the country who had played important roles for the Western military — whether as translators, guides, or whatever else — and who now were being abandoned by their former allies’ governments.

In Ben’s new book 300m, a WhatsApp chat with a friend and translator is being reproduced. It follows the friend’s attempts to reach the entrance to Kabul’s airport in the frenzy that, I’m sure, you have seen somewhere on a screen. It begins 300m (900ft) from the gate, and it ends with “I saved my self and my family”, “We are inside but others are not here”, “We left the area”, and “We left out I was close to Americans”. What might have gone through Ben’s head while following his friend’s journey I have no knowledge of. Knowing him, I have an inkling. I also have an inkling what he might be thinking about Mr Bush’s Masterclass. 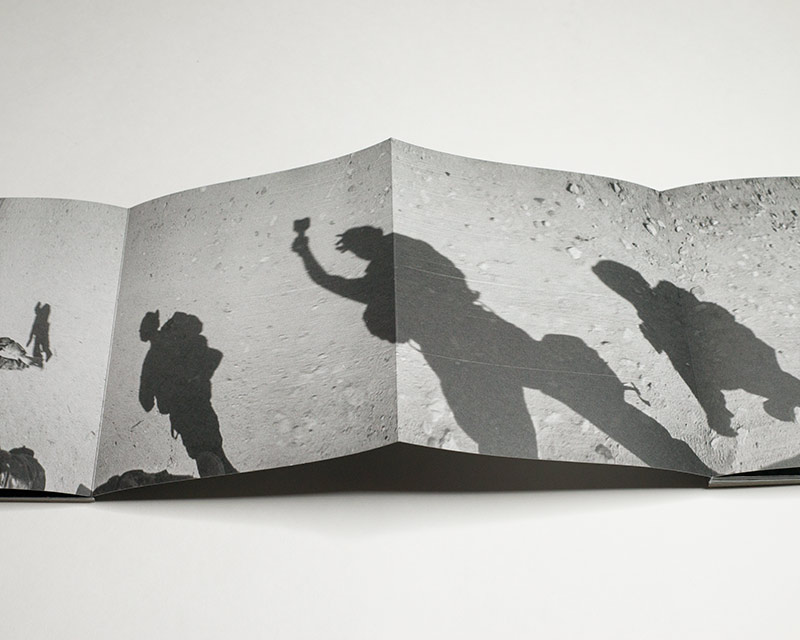 If you are familiar with Attention Servicemember you know that Ben was a US Army photographer first before he began working as an independent photojournalist (in Iraq and Afghanistan). The book details his own personal story. But it also attempts to break open the still too-narrow confines of photojournalistic storytelling by embracing the many options provided in the world of the contemporary photobook. It thus ends up being a unique hybrid that is able to reach the worlds of photojournalism and art, even if in both, I assume, there might be misgivings over details.

In contrast, 300m appears to look for an audience in the world of art. As it turned out, at some stage, Ben brought a 360 degree panoramic toy camera to Afghanistan, “as an ice breaker,” he writes. Why or how a plastic camera that looks a little bit like a grenade is an ice breaker escapes me — this might show how little I know about war. Then again, “one time,” Ben also writes, “a soldier thought I was detonating a grenade and dove into the dust as the camera spun around above him.” It would seem that there’s ice breaking, and there’s ice breaking. 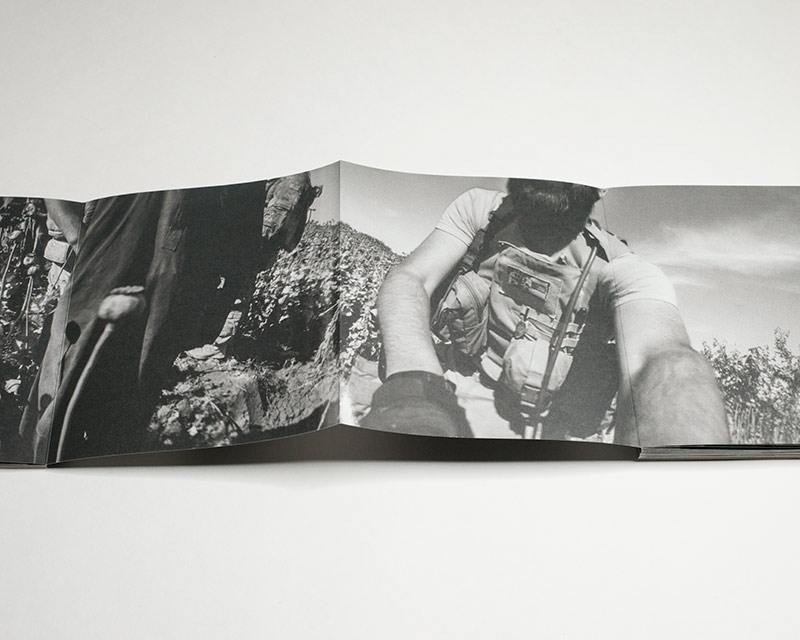 You can probably imagine what a 360 degree panorama looks like. It’s very wide, and given the optics work, it can lead to very wonky pictures. But it’s the very wonkiness that creates the most interesting element of these pictures. As the camera spins around, it catches any number of people in its site — essentially everybody present, whether they’re posing or looking at the camera or not. More often than not, Ben himself appears in the frame somewhere, whether crouching down in a poppy field or as a shadow that holds what does like a grenade high over his head.

The book presents these pictures using the accordion format that, I continue to maintain, is underutilized in the world of contemporary photobook making. It’s a very simple format that, alas, requires careful attention in its execution. For the book, Ben teamed up with Dutch design team Kummer & Hermann again, yielding another demonstration of how a good photobook can be made. 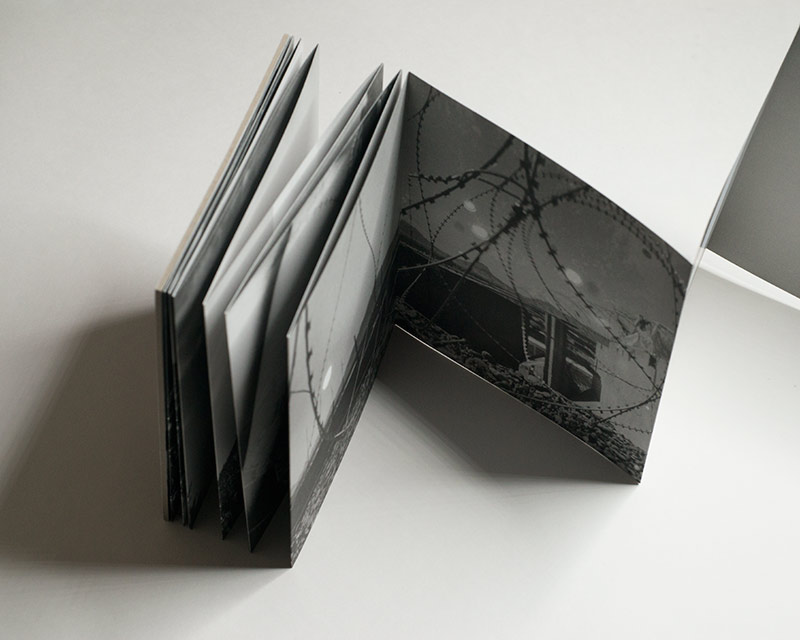 An accordion book has two sides. Here, both are used to showcase the photographs. There are two boards at the ends of the accordion, each with a picture and the title on them. Given that an accordion has no spine and is iffy to store on a bookshelf on its own, the accordion is wrapped into a bright red cover that contains all the text (plus the colophon) on the inside. The whole construction is held together by a rubber band. As can be expected from a book produced in the Netherlands, everything is simple, effective, and beautiful (except, maybe, the rubber band, which attracts dust and will eventually dry out and break — but then, so do all book materials).

You will want to get a copy of this book simply to see that the one thing that makes for a successful and engaging photobook is not the camera someone uses, it’s not the topic, it’s not even good pictures (even as there are a lot of good ones in this book) — it simply is the book’s makers’ vision. 300m immerses the viewer in a number of situations in Afghanistan that have them see war in a different way.

This is an actual masterclass of a book. Best of all, when you get a copy your money will go to someone who actually deserves receiving it.