What do we do with – or to – each other when we live together with someone? Living with other people entails a flurry of things that we are all familiar with, even though large parts of our experiences might not have risen to the level of consciousness. What we feel and see: do those we live together with feel and see the same? How do we navigate this seemingly endless territory? Over the course of a decade and a half, Ute Mahler photographed people in her immediate surroundings to find out.

What can photographs tell us about living together with other people? In a brief afterword to Zusammenleben

(German for “living together”), a book that collects many of the pictures, Mahler writes “I was spurred on by the question of how familiar people were with each other, as well as how alien they could become. Today, I think I probably wanted to take pictures where you could see love.”

Isn’t that interesting how forty years after the very first picture was taken the photographer’s mind has shifted from thinking about pictures showing people living together to pictures showing love? For a start, photographs have a much easier time depicting two (or more) people living together than showing love. Photography deals with surfaces – much like we do as well. We cannot know for sure what is going on in another person’s head, unless we are being told (and even that might not be the full or actual truth). 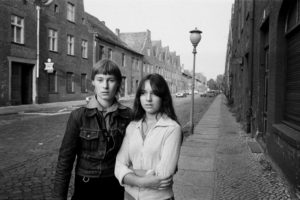 But Mahler’s statement is informed not just by having photographed all these people, not just by having studied the resulting pictures very carefully (the artist is one of the most astute reader of photographs I have ever come across), it is also informed by having lived a life of her own, a life that includes her husband Werner (also a well-known photographer) and their son, Paul. There is a picture of Werner and Paul in the book, a very small image showing Werner in bed, with a baby lying on his naked chest, photographed from above (in the bottom right corner of the frame, the photographer’s foot is visible).

Photography and life are inseparable. If you are a photographer, you need to live with your pictures just like you want to live with other people: take them very seriously and listen to what they tell you. But photographs aren’t like other people in the sense they reflect back to you, as the photographer, how you see the world. They encompass your decisions about very particular moments in time. So they tell you at least as much about the world in front of your camera, as about what went into the decision to press the shutter button at very specific moments in time. 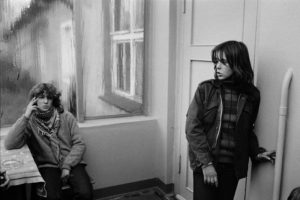 You might have pressed the shutter button multiple times, resulting in multiple pictures around the same subject. Your task is then to pick the one that “works,” the one that is better than all the others. Better in a photographic sense, of course, because other people will have no access to your feelings, thinking, or intentions. So suddenly, the pictures become independent entities, partly detached from you, because the best frame might not be the one you would want to pick. But you’ve got to be honest with your pictures…

As a result, what we think we intend to do with our pictures and what they end up doing might be two entirely different things. Or they might overlap in curious ways, with one – “the question of how familiar people were with each other” really just standing in for another – “pictures where you could see love.”

Seen that way, photographs behave like mirrors, except that they don’t necessarily reflect back what we think we know about ourselves. 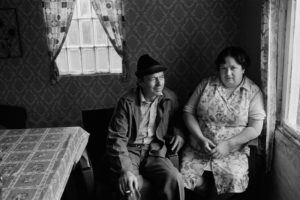 Can we see love in the picture above this paragraph? We can certainly try detecting it. But isn’t the woman leaning away from the man (her husband?)? Isn’t he looking out of the window, while she is looking at the camera? Are they mentally in the same space in the way that they physically are? And even if we were to conclude that these two don’t necessarily look like there is love between them – how would we know what might have been the truth the moment the picture was taken?

Much like life, photography is an exercise in futility. Photographs can’t show us some of the most important things in life, yet we keep being engaged with it anyway. In part, this is because somehow what went into the making of photographs can be felt by the viewers. More than once, I had the opportunity to watch Mahler engage with students and their photographs, and this seemingly so German woman inevitably would start talking about what she was feeling in the pictures. 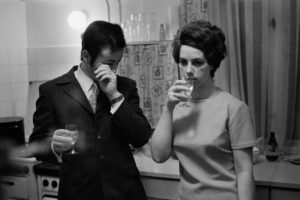 How about these two? Isn’t it interesting how you can feel something in this picture? You can approach the photograph formally and study its composition, you can study its visual content, but you can also feel something here. To be able to make photographs that convey feelings is an immense gift, but of course in part it is rooted in being able to be susceptible to what other people might feel. Photographers’ empathy (or lack thereof) is a topic that is rarely discussed.

We don’t talk about feeling in photography much, don’t we? Maybe Zusammenleben can teach us what can be gained from approaching photography in this way? I want to think so.

Needless to say, my reading of these photographs might be biased, given I know Ute Mahler quite well.

But there’s a good title for a book yet to be written: The Empathetic Photographer. There’d certainly be a chapter about Ute Mahler in it.