I’m perfectly happy buying books second hand, whether online or off, even when I’m dealing with photobooks: I don’t see the need to own pristine copies of each and every book intended for my library. A used one will do, assuming it’s in decent enough shape. At times, even this criterion, the decent enough shape, will get discarded. That’s when I’m looking for hard-to-find books, which in the case of photobooks inevitably means: expensive ones.

There is a seedy, dark side to the world of photobook collecting and owning, which hardly ever gets talked about, namely people stockpiling “out-of-print” books, to sell them off, one at a time, to collectors or people interested in getting their rare copy. Apart from the fact that I don’t have infinite funds to spend, I just don’t like the idea of literally buying into that.

If you spend enough time looking, you can find almost any book for a reasonable price eventually. Unless you’re lucky, finding some rare book for next to nothing at some used bookseller (never happens to me), there usually is a snag, namely the fact that the book might be in what many people would not consider a good enough condition.

I will not buy completely ratty or half destroyed books. But if I can get an otherwise rare photobook with a slightly damaged cover, say, then I will buy it. For example, I found a paperback copy of W. Eugene Smith’s Minimata on eBay. The listing said the book was in fine condition, but the cover had detached. I bought it ($10). There’s nothing a little glue can’t fix (also, a friend of mine is a book binder).

Over the course of the past few years, I have started a small collection of books that were discarded from public libraries. With library books, it’s easy to predict what shape they will be in. There might be all kinds of stamps and markings. But usually, they’re clean, and often enough they look as if they had gone through a fair amount of hands. But that’s not always the case. 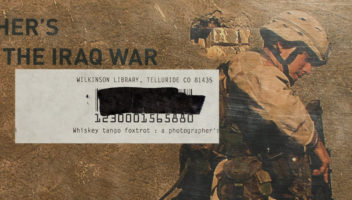 I don’t necessarily want to know what makes libraries discard books. I have some ideas, but I’m worried that they are correct. For example, I found a copy of Ashley Gilbertson’s Whiskey Tango Foxtrot, discarded from a library in Telluride CO. The book is ten years old, and the consequences of the war depicted in the book are still with us. Yet the book has already been discarded from a public library. Whiskey Tango Foxtrot indeed. 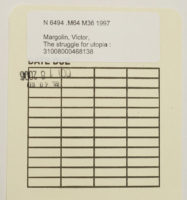 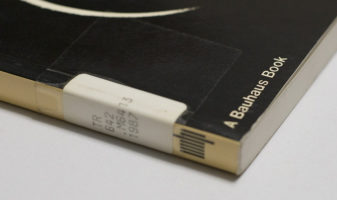 I have an almost pristine copy of Laszlo Moholo-Nagy’s Painting Film Photography (second paperback reissue from 1987) from a college’s library in Tuscon AZ. It doesn’t look as if anyone ever looked at the book. My copy of Victor Margolin’s The Struggle for Utopia, discarded from the Illinois Institute of Art, still has its original library card inside (none of the newer books have those, probably because library-wise things have gone digital). The book was taken out twice. I tip my hat to those two brave souls, but only ever so slightly: maybe they were both incredibly careful with the book, making sure it wouldn’t get even slightly bent while reading it. Maybe.

And maybe it’s snobbish for me to write all of this. Who am I to tell people which books should be read or looked at and which ones should be discarded? Then again, if one of the best books about the so-called war on terror gets discarded from a public library within a decade of its publication, when a college can’t even make its students read one of the most important modernist creeds written about photography, then that might also tell us something. I don’t know, something here feels wrong to me. 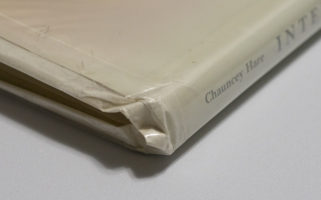 But these withdrawn books could also point to the larger set of relevance that we, inside photoland, attach to certain books, but not to others. Maybe what’s in Parr/Badger doesn’t matter that much? Or not enough for it to remain in a public library (my copy of Chauncey Hare’s Interior America comes from one in the UK). That’s possible.

Alternatively, maybe we don’t do a very good job bringing those books closer to the public, and I don’t mean that in the literal sense. A book could be in your neighourhood library, but if nobody looks at it, it’s still very far away.