Of all the photobooks that I thought needed to see a re-release, Michael Schmidt‘s Waffenruhe was clearly the one in the top spot. With a second, facsimile edition now being available, this masterpiece of a book can finally get a much wider exposure. If you want to get yourself a copy, type “Michael Schmidt Waffenruhe Walther Koenig” into a Google window and proceed from there to the book publisher’s website. Unfortunately, copying the link to use it here doesn’t work. Note that there are German and English language versions available.

Waffenruhe, plus the subsequent Ein-Heit (U-Ni-Ty in its English language edition), produced by Schmidt roughly a decade later, should be considered as the two most important photobooks made by a German photographer in the second half of the 20th century. Darren Campion recently published an in-depth article about Ein-Heit, which you can find here. What makes both Waffenruhe and Ein-Heit so interesting is not the fact that they were made by a German artist. It is that they each very ambitiously deal with larger aspects of recent German history, while somewhat quietly pushing the boundaries of the medium photography. 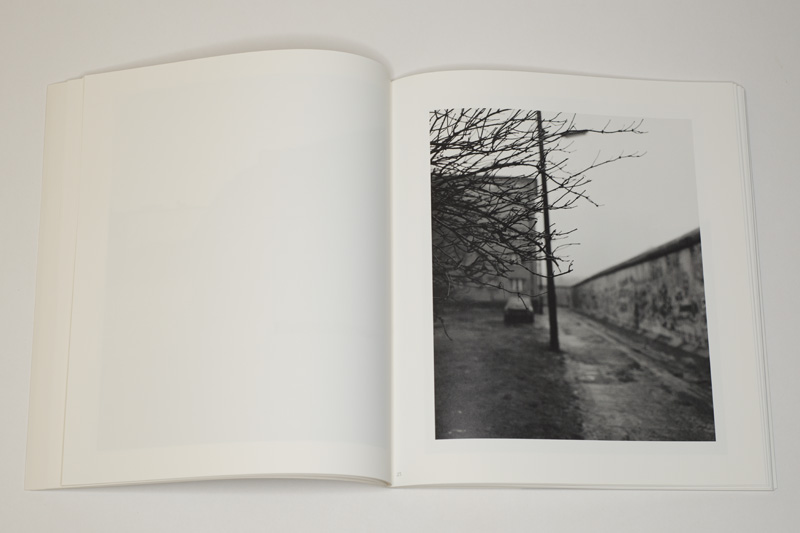 Of all the photobooks I know, Waffenruhe features by far the strongest and intense opening sequence. The first five photographs are more felt than seen, and they communicate this idea very strongly to their viewers. Only the sixth photograph (on page 12) is merely seen, merely descriptive: a section of the Berlin Wall, covered with graffiti, with a section of wasteland right in front. Two pictures later, Schmidt includes a photograph of a photograph (which, from the looks of it, might have been part of a display): it’s the well-known 1962 photograph of Peter Fechter who while attempting to climb across the wall was shot and who took an hour to die while neither East German forces nor (obviously) Western ones intervened.

Fechter was 18 years old when he died, and the young man on the following page is very similar in age (this man will re-appear in a later picture). Photographs of people are sparsely used by Schmidt in Waffenruhe, and where they appear they carry quite the weight. This weight in part derives from the overall feeling of dread that is being created throughout the book, a dread that a visitor to the city at the time would have felt. I remember I did. West Berlin was a strange place, clearly a part of West Germany but in many ways not. Legally, it wasn’t, and in all kinds of other ways it wasn’t, either. Wherever you were, it was straightforward to cross a corner and find yourself in some rancid wasteland. And then you would cross yet another corner, and there it was again, the Wall.

Up until German re-unification, a ceasefire — the German word is Waffenruhe — was in effect, turning the two German states into somewhat odd affairs: they each behaved as if they were normal countries, which they clearly were not. And they each relished this strange absence of normalcy, while pretending the opposite was the case. Everything was always too normal in West Germany, but almost nothing had any major consequences (I cannot speak for East Germany, given that I only visited once, for roughly a week). The things that did end up mattering consequently created almost epic confusion and an intense circling of the wagons by the establishment, whether it concerned the student revolts or left-wing terrorism. 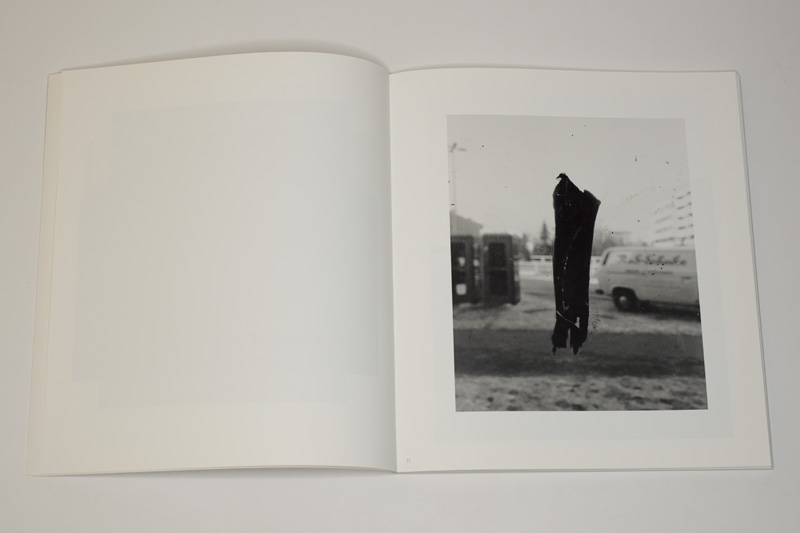 There was a huge fence separating the two countries, on the eastern side equipped with all kinds of deadly machinery to kill those who tried to cross. But it was the enclave of West Berlin that drove home the weirdness of the whole situation: as a high-school student you inevitably had to visit West Berlin, because for reasons that were denied almost on a daily basis, somehow Berlin had a deeper meaning. And then you’d go and find this city that looked like any other West German city, except it was a bit rattier, a bit more rancid, and also a bit more alive.

And this is really what Schmidt describes photographically in the book, this somewhat shoddily and incompletely pasted over rancid city that somehow just seemed to hang in thin air and that was used by East and West Germans alike for their own causes. There was this enormous contradiction going on that I found hard to describe then, just as I find it hard to do so now. When the country was being re-united, Berlin became the capital, which was opposed vehemently by large parts of the West German establishment that were happy with being nestled in the provincial town of Bonn. Given Berlin was so rancid and ratty I thought of course it ought to be the capital: how else would the newly re-united Germany be forced to confront more of its past than the two separate parts had done before?

Strictly speaking, the term “re-unification” is not very accurate, because the resulting Germany had in that shape and form not previously existed. What I have never seen acknowledged anywhere is the fact that this is the very first united Germany that is not occupying foreign parts (like the first united Germany in 1871) or that has claims on other parts of Europe that previously had been German (like the various German states afterwards). However you feel about Germany, given its history that’s quite something. 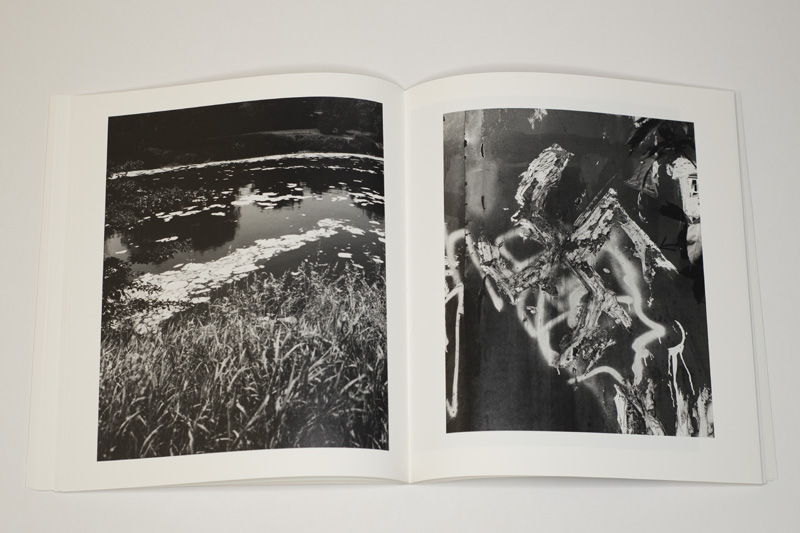 One of the frequent devices Schmidt employs in Waffenruhe (much less so in Ein-Heit) is to very selectively describe what was in front of his camera. The focus might not be where you would expect it to be, or there might be something right in front of the camera’s lens that obfuscates what is beyond (or vice versa). This makes for very interesting material if you consider Szarkowski’s ideas from The Photographer’s Eye. Beyond photography, the device also visually gets at the West German approach to its own reality, by describing one thing very clearly while meaning another or consciously omitting another.

Published only two years before the Berlin Wall fell, Waffenruhe very clearly is not just a book about (West) Berlin. It is a book about West Germany, the strange country that struggled so mightily to transform itself into something better, while, at the same time, being so adamant about remaining in place. Only when Chancellor Kohl was finally kicked out of office in the late 1990s did that transformation finally have a chance to occur for good. Curiously, around the same time, Ein-Heit was published: with these two books Schmidt clearly was feeling the pulse of the time (it’s not clear to me if people realized). 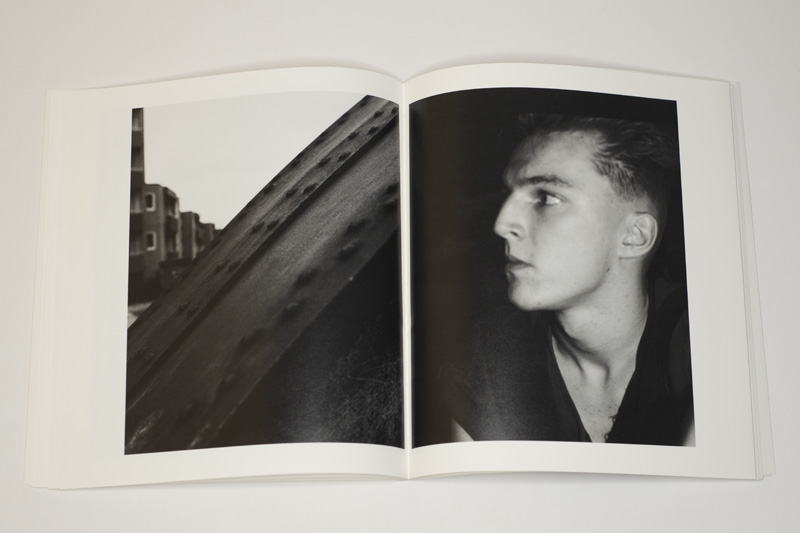 The larger history aside, what makes this particular book so important is its visual vocabulary, this insistence of the artist to have the pictures conform to his vision, a vision that sees the world not as it is but how it feels. As I noted above, Waffenruhe is mostly more felt than seen. It is this translation, this bringing about of feeling through seeing with the help of a camera (plus copious amounts of work in the b/w darkroom) that makes the work so strong, so forceful, so emotional. This is what is lacking from the various Schmidt copycats: the photographic device minus the underlying vision becomes a mere formal exercise.

It is very likely that my West German background and my age contribute to my read. Had I been born ten years earlier, it’s likely I wouldn’t have felt so stifled by the country’s restrictions, its partly self-imposed political infantilism, and the — for me — tedium of seeing earlier attempts to break through play out. Had I been born ten years later, I don’t think I would be able to feel Schmidt’s Waffenruhe pictures the way I do now. But I’m convinced someone not born and growing up in West Germany might have a hard time seeing how Schmidt’s photographic devices go beyond nifty formal exercises, how instead they get at so much more: they describe an emotionally crippled country so well.