Photography almost always centers on what you decide to show and what you decide to conceal. It’s like a game, where you hand out some clues, and you’ll have people figure out what it all might mean. As I wrote elsewhere, a photographer is like the person standing next to you who’ll whisper something into your ear to make you react. Mind you, your reaction might not be what the photographer had in mind (the idea of the photographer’s intent driving the meaning is very flawed); but at the very least there is a tacit agreement about the ground rules. Without these rules, the game of course wouldn’t work; and the fact that we know the rules while often being seemingly unaware of them only adds to the enjoyment that can be had with photographs.

If you know the rules, you can even play your games with the rules. You can pretend to follow some rules, while in reality working with very different ones. You can start playing your own games with people’s expectations. Doing this well is tricky, because it relies on your audience being visually literate enough to get what’s going on. One of the risks is always to produce something that’s little more than an insider’s game, little more than an exercise for a group that might be too much in love with its own cleverness (this is my problem with New Formalism photography that, sadly, is so en vogue these days). So things can’t become too self-referential. There have to be enough hints at other possibilities. There has to be an openness to something that’s beyond the photographer’s control.

There are a lot of things that are being hinted at in Sandy Volz‘s Me and the Others. As is always the case with photographs that don’t give much information, things can get very confusing. In the photograph above, there is a person’s head, but we only get to see its back, in particular the long hair that is flowing over what initially looks like a couch. But is it really a couch? If it’s not a couch then what is it? (And does this matter? If yes, why?) The rest of the frame is pitch black. This is not how we tend to see things in real life. Very few people spend their time in rooms so large that a flash will clearly illuminate something, yet leave the background completely in the dark.

So what does this mean then?

Well, what do you want it to mean? 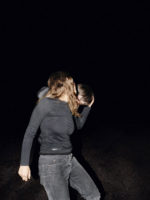 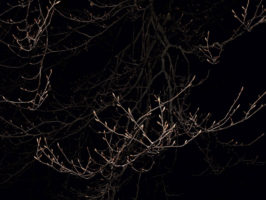 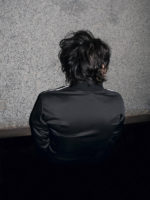 We aren’t shown the faces of the people depicted in Me and the Others. Yet we are close enough to see them clearly, and they’re engaged in all kinds of activities. The process of photography always involves the transformation of a viewer into a participant. In fact, this is the very reason why there has been so much hand wringing about the medium and its supposed cruelty: I don’t think we’d worry so much about the medium if we didn’t feel we’d be made, let’s face it, complicit.

Now isn’t that the greatest medium you could imagine, a medium so powerful that it makes its viewers feel they are almost responsible for what they see, when in reality they’re not? It gets even better: Photography shows us things that we wouldn’t have seen, yet we still feel complicit.

Somehow, we feel as if we had something to do with the people in Me and the Others, as if what they’re engaged in had something to say about us, our status, our relationship to these strangers. We want these images to mean something, possibly something very specific, but they don’t seem to conform. They make us feel something entirely different (the point here cannot be to try to narrow down what we are led to feel).

That is how a lot of photography operates, much to our chagrin. That is where many (most?) of those controversies about photography originate: We want one thing, yet we are given another. So it’s the photographer’s fault that the world doesn’t conform to our (internal) world of make believe! It’s the medium’s fault! It’s cruel! It exploits its subjects!

Oh, and do they push those buttons alright!