I had become deeply suspicious of the world of galleries when the economy was made to crash by reckless banks, dragging everything, including the world of selling photography, into the abyss, at least for a while. The idea that what was being shown in galleries represented the best of photography (however you would want to define that) I had long abandoned. But the crash and subsequent change in what was shown made it very clear to me that if there is a correlation between commerce and quality, it’s loose, at best.

In a sense, that is totally fine, because if rich people (I think galleries prefer to talk of “collectors”) have different ideas of what they want to hang over their couches than this writer, that’s just the way it is. However distorted the system might be, via galleries those same people pump considerable amounts of money into the world of photography, propping up the good along with the bad.

By extension, I am deeply, deeply suspicious of art fairs, even though they really just represent the system of selling photography in its most blatant and honest form. If you are a gallery going to some art fair, you really offer what you are fairly certain you can sell. So fairs are a great gauge what is going on in “the market.” Up until three years ago, I had been to a small number of fairs, finding them all equally insufferable for exactly that reason, though. Turns out I just don’t care about what people buy.

Three years ago, I got invited to Amsterdam’s Unseen for the first time. Unseen combines a photography festival with a fair. The fair bills itself as focusing on “new photography,” which could really mean anything. But “new” here (mostly) means “new to the market.” Thus when you visit the fair, you’re not going to see the same of stuff you see everywhere else.

I spend a lot of time looking at photography, but going to Unseen is like going to some Wunderkammer, with copious amounts of real treasures to be found. What do you know, here’s a photo fair I really enjoy going to. 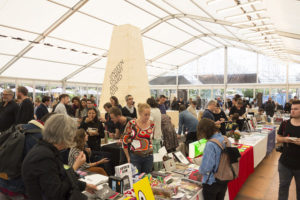 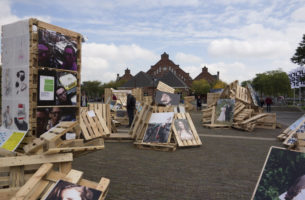 I remember last year, I was blown away by Augustin Rebetez (whose work I had known, having interviewed him for FOAM Magazine the year before). This year, there were, for example, Anna Cabrera and Angel Albarrán whose installation I just couldn’t photograph adequately for it to look even halfway decent in a picture (there is a lesson here, which I keep re-learning: the web is great, but the reality is that what a book or exhibition install will look like in real life often is completely different). The same applied for Marleen Sleeuwits, whose work I also had known quite well, but who somehow had made that quantum leap that can make art so exciting.

By construction, the Unseen fair offers a large number of very new work, and this means a lot of New Formalism. I’ve heard this as a criticism of sorts — “how does this represent photography?” But that’s really a bit unfair, given that no fair represents photography anyway, and Unseen is quite open about its mission to show new work. Now those who really dislike New Formalism will just have to wait around five years or so for the fad to be over (hopefully less). But it does represent photography, at least right now, in much the same fashion that the Düsseldorf school stuff did before or whatever was hot before that. That said, I won’t disagree with a curator from outside of the Western world (who shall remain nameless) who observed that there were “a lot of pictures of stones.”

Whatever misgivings one might have about what’s hot right now, seeing it installed in person is a good test to determine its photographic strength in another form. I’ll admit that most of New Formalism falls completely flat in a frame on a wall (pardon the pun), essentially making it eye candy for (rich)  intellectuals. In a side nook of the main exhibition hall, though, Wandering Bears (Luke Norman and Nik Adam) offered an install of their work, a collaboration with Charlie Engman, demonstrating how such photography can — or probably should — be shown. I thought that was highly successful. 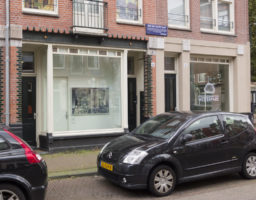 Another nook had the Polish collective Sputnik Photos, who presented an overview of their work in the form of the various books they have made (you can find reviews of some in this site’s archives). The Sputniks for sure are photographers to watch, given the diversity and strength of their work, the topics they cover, and the fact that they’re highly cognizant of the medium photobook.

Of course, there also were established artists represented at the fair, of which I truly enjoyed new work by Raymond Meeks, Gregory Halpern, Awoiska van der Molen, or Mayumi Hosokura, to name a few. Peter Puklus had been put in charge of the Unseen campaign, and that was truly enjoyable as well (he also gave what might have been the best artist talk I have ever heard).

Along with the fair, Unseen also included outdoor exhibitions, a photobook market, and an actual festival with presentations, talks, and panel discussions. Out front, Erik Kessels presented The Embarrassment Show, which was literally that, photographs made by students at Lausanne’s ECAL with the idea of focusing on something embarrassing in mind.

The book market tore just a minor hole into my budget, with Makoto Azuma and Shunsuke Shiioki’s Encyclopedia of Flowers II easily being my favourite find, a visceral overabundance of colourful beauty. If this book won’t make you gasp, you might want to make you check whether you still have a pulse. Other than the flowers book and a couple others, there were a lot of books, of course, but none that I really needed (except for that marvelous Sophie Calle book, for which they asked 200 Euros, though, because they had stamped English translations into it. As a rule, I don’t spend more than 100 Dollars or Euros for a book).

Yoshinori Masuda won the Dummy Award this year with Tiger 2. I’m not sure whether I agree with the jury’s assessment that it’s “certain to be an instant classic.” 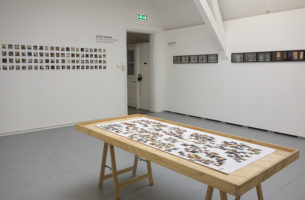 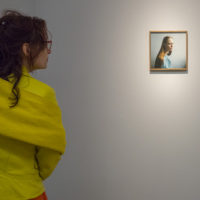 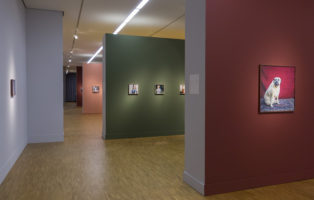 As is the case every year, FOAM presented their selection of Talents, with both huge on-site photographs and short interviews with the photographers who were present. In addition, the photographs had been distributed across the festival’s neighbourhood, so you could see them in restaurants and shop windows. While art photography already seems to be a lot more embedded into and accepted by the larger Dutch society than the US one, I really enjoyed seeing the added step of taking the work outside of a very art-specific background.

I always tell my students that there is no law that governs that an artist can show work only in galleries, museums, or in books (that are then sold in what essentially is a closed system), so far with little luck, though. But just like Zoe Strauss demonstrated that you can exhibit your work outside of the narrow confines of photoland, I hope this idea will catch on a little more. FOAM showed part of the way.

After Unseen I went to Utrecht to stay there for a couple of days, and I used the opportunity to visit Fotodok, which had (No) Privacy on view, a mix of obvious and not so obvious work on the topics of surveillance and privacy (I can’t find an English version of the page). One of the highlights was Milan Rijnders‘ project on the amount of information you can easily find on Facebook about people, using simply an email address of someone to unearth information and photographs of that person’s family and friends (can’t find that online, either).

The last (photo) leg of my trip consisted of going to The Hague, to see my friend Hellen van Meene‘s mid-career retrospective at the photo museum. Given we’re friends, my assessment is obviously biased. But this is a highly successful exhibition, with an amazing degree of artistic coherence, given the time span over which the photographs were taken. Those who can’t make it to The Hague might enjoy the book, a brilliant overview of this photographer’s vision.