Every location that puts a claim on being one of the centers of contemporary photography needs to have a serious, high-quality photography festival/fair. This bar is being crossed easily by the Netherlands, host to more than one festival, Unseen in Amsterdam being merely the latest addition. I had the opportunity to visit Unseen last year and again this year, being part of and exposed to its programming.

Unseen combines a photography festival with a fair (or, if you’re approaching this from the commercial angle, it’s a photo fair with added festival programming). Fairs obviously are centered on the idea of selling photography, an aspect of the photography world I essentially have zero interest in. But they do provide a good opportunity to see what is going on in the world of galleries.

I think people sometimes forget (or maybe ignore?) that while galleries are an important part of the world of photography, one needs to be careful with making a link between what is selling and what has artistic merit. Galleries aren’t run by photo critics, they’re run by business people. Fairs are great places to see what’s currently “hot” on the market. The case of Unseen is slightly different, given here the focus is mostly on “emerging” artists, artists that might break into the market.

Consequently, if you go to Unseen, you’re unlikely to see large numbers of the usual suspects, which I personally find satisfactory on many different levels. This year, the overall quality of the work on display in what used to be an old gas tank was quite a bit higher than last year’s. Given the fair is now three years old, it appears to have found a rather solid footing now. I agree with Sean O’Hagan that Augustin Rebetez stole the show with his work and install (see Sean’s piece here). Another artist I discovered is Matt Wilson, whose rather small and initially unassuming prints I overlooked more than once before I discovered them. Word is there is a book in the making, which I’m looking forward to. 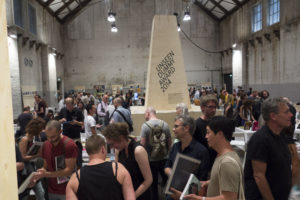 Speaking of books, part of Unseen is a dummy award (I was a juror last year) and a book market. The latter usually is bad news for my wallet and back. This year, I managed to avoid breaking my suitcase (I was less successful as far as the bank is concerned). I will review various of my finds over the coming weeks. Given its connection to Unseen, Heikki Kaski‘s Tranquility deserves special mention, though. Winner of last year’s Unseen Dummy Award, the book was officially released at the occasion of this year’s fair. It’s easily one of the best photobooks to have come out this year. Speaking of very good books, Fw: released Awoiska van der Molen‘s Sequester, which I think we’ll also see on many “best of” lists this year.

In addition, the festival featured a string of events, panels, and presentations, centering on various hot or interesting topics in the world of photography, too many to list them here. In a sense, Unseen really shows how a photography festival can be done in a way that keeps things fresh. The world of photography is notoriously conservative and orthodox, so rumblings about Unseen being “too hip” probably need to be taken with a grain of salt. I personally would rather see a selection of less well known artists, with some bigger names mixed in – instead of the often tedious format of a few big events centered on the usual big names, with some crumbs for the younger crowd thrown in halfheartedly.

The Netherlands truly have incorporated art and photography into their culture to an extent that I don’t see much anywhere else, certainly not in the United States. Along with four other curators, I had been invited by the Mondriaan Fund to come to the Netherlands, in part to see and participate in Unseen, in part to meet artists and/or visit major museums. The country’s public commitment to supporting the arts has truly created a deep and meaningful atmosphere for the arts, and this very clearly includes photography. As a consequence of the 2008 financial crisis, funding has been cut back, but the still existing levels are impressive. This matters greatly, especially once one becomes aware of the tremendous breadth of photography coming out of what is a relatively small country.

Seen this way, Unseen is not just some fair/festival. It is also a gateway into a world where a commitment to the arts, combined with considerable public and private funding, have resulted in a vibrant culture around the medium photography.