The problem with photography is that regardless of whether you, the photographer, believe that what you point your camera at to make a picture is actually in it, large parts of your audience will do just that. Photography’s descriptiveness is its strength and its curse. People will see a photograph of a person as that person, or as a photograph of that person, even if what you’re interested in is something a lot more universal than that. In much the same fashion, a photograph of some place becomes that place, resulting in some people actually watching over whether certain places, let’s say Appalachia, is depicted in the proper way. Might they not be served better by their local tourist offices?

If photography wants to be a true art form it will have to engage in a world that at least acknowledges the fact that the visual description of whatever was in front of a camera lens (which might or might not have been altered – let’s ditch the term “manipulated” – during post-production) does not in fact describe the actual topic. In other words, you can engage with Tranquillity as photography, or as art that happens to use photography. I realize how useless it is to re-open the discussion about whether or not photography is art. That said, if we accept that photography is – or maybe more realistically: can be – art, then we have to treat it as art – and not as merely photography. To somewhat loosely paraphrase David Campany, photography describes what is (or rather what was the moment the picture was taken), art (-photography) alludes to what could be or maybe should be.

There is a town called Tranquillity somewhere in California (the Wikipedia page tells you more), one of those numerous God-forgotten places that litter the North American continent. This is where Heikki Kaski went to take photographs, which resulted in Tranquillity, the book (“the book,” the photographer’s website notes, “comes with an endless edition of nothing”). To take up my earlier train of thought, as a viewer, you now have an option. You can take all of this at face value and try to determine what the book tells you about the place. Alternatively, you can treat the title and hence the town as a red herring and try to experience the book in a different way. I am going to go for the latter. 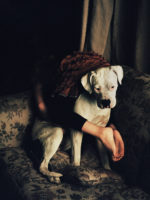 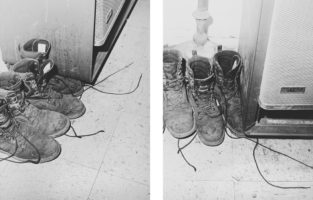 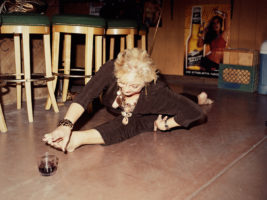 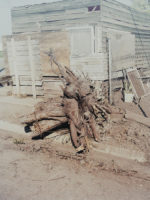 My task is made a little easier given that Kaski employs a few games in the book that, I think, hint at his desire to move beyond photography’s literalness, its descriptiveness, to show how little is gained from sticking to exactly that, the literalness, descriptiveness. For example, early on in the book, two pictures can be found side by side, both of them showing a tree covered by a tarp. Their framing is  slightly different, but crucially, so is the time of day. One was taken at night, the tree illuminated by a flash, the other one during the day. It’s the same picture, and it isn’t. It gives us the same information, and it doesn’t. These picture are not in any kind of literal way about that tree. They’re not even about how photography renders the scene at different times of the day (that would just be another way of being very literal). They are instead about a clarity of description and, crucially, how little is gained from it if we stay too close to that.

Later in the book, right around the middle, there is a sequence of images bookended by bright orange pages. Each of those images shows the sky, with a flock of birds circling in it. It’s one of the most marvelous parts of a photobook I’ve seen in a while. It completely stops you in your track, it interrupts whatever experience you might be having with the book until then, it takes you into a different state of mind, and then it drops you right back into the main story. It’s almost shocking to see how well this works. There we are, thinking about how photobooks work, how you edit and carefully sequence them, and Kaski throws a spanner into those wheels, breaking up the flow of the book, subverting one type of artifice with another, only to make it work.

There are more games like these being played in the book, and they all work. They all work effortlessly, in a way that is less about playing the game and about showcasing how visually smart the book’s maker is, then about alluding to a state of mind. Tranquillity ultimately is a state of mind more than anything else, a visual meditation that uses a somewhat specific place as a conduit for a larger story that, in the end, cannot be revealed. Photographically, a lot is obscured. Where something isn’t obscured it is shown in multiple ways (like the tree) to remind us how little photography’s descriptiveness actually shows. It’s a book that I have been looking at over and over, almost obsessively, without ever getting tired of it.