Chances are that you are familiar with part of Weronika Gęsicka‘s Traces. You might have come across an image or two on the cover of a photography magazine or maybe on a poster advertizing a festival or exhibition. Yes, to some extent, it’s that kind of work: it lends itself very well for those occasions where someone needs an attention-grabbing image. Even though most photographers eager to get any kind of exposure wouldn’t see this as a reason for concern, poster-image compatibility can be a problem: what if you’re interested in something that gets a little deeper?

Well, I’m making a pretty big assumption here, namely that you are in fact interested in that, in getting something deeper. Who says art needs to do that? But maybe I’m already getting ahead with what I’m after. To back up a bit, the idea behind the Traces is pretty straightforward and in line with a larger trend in contemporary photography: an artist will mine an archive and in some form transform found images into new ones. That might be, for example, embroidery on found portraits (work that now mostly seems to exist at art fairs, possibly for a reason). It might be found photographs incorporated in some narrative-driven photobook. It might be old-school collage, which, btw, does not get the attention it deserves (some of my favourite accounts on Instagram are collage artists).

Or it might be artists scanning old photographs and then transforming them using Photoshop. That is the territory we’re dealing with here. The source material for Gęsicka’s work is mid-20th Century American stock imagery — the cheerful mostly white middle-class America that loved to pretend there was not a worry in the world. Employing considerable Photoshop trickery, the artist modifies these photographs into something else. In a photograph of three young men on the beach who each carry a young woman on their shoulders the men’s heads go missing (poster alert). A family sitting at a table and working on a puzzle becomes part of the puzzle itself. In a photograph of a young couple sitting by the fireplace, the woman’s face ends up being a mask held in front of her by the man (poster alert). Etc. 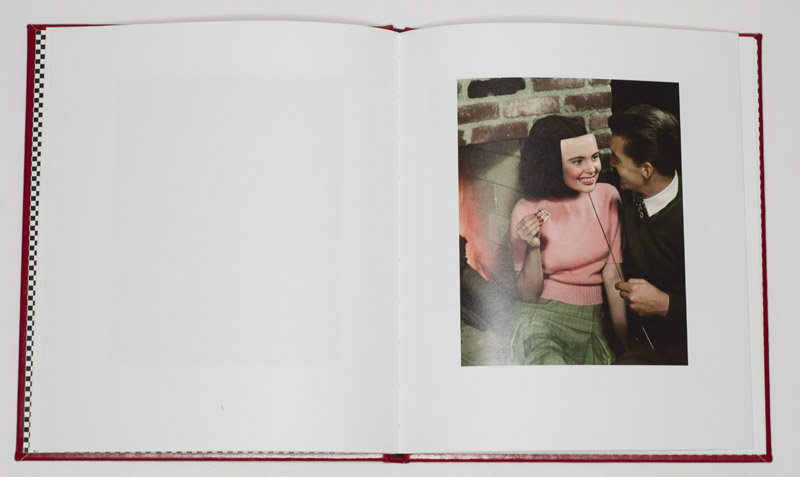 The immediate reason why the work resonates so well is because it’s done very seamlessly, while — at least in the well-known images that appear to be all over the web — Gęsicka stayed clear of applying too much trickery. Traces, the book, collects the work and offers it in possibly the most attractive way. Made to look like an album that would not be out of place in the very era the source images are culled from, the object itself adds to the fun. The cumulative effect of the book, the taking of the images away from magazine covers, festival posters, and the inevitable novelty-item articles on click-bait websites puts a sharper focus on the work itself. But this is also where it gets a little iffy.

To cut to the chase, having looked through the book I am not sure whether the artist was interested in merely the Photoshop trickery, or whether she wanted to trigger a discussion that the source material — that pretty world in which there are no problems whatsoever — just begs for. Even though I personally have my preference (if you’ve read this website long enough it will be extremely obvious to you which one it is), it’s not my role to make that decision. It’s the artist’s. But it’s exactly here where the work can’t decide what it wants to do or rather where the artist seems to be on the fence. It’s possible that producing work more critical of what is shown or implied in the source imagery was never the intention. I simply can’t know from the work.

I don’t have this problem with the aforementioned embroidery work. An artist will add some embroidery on old pictures, and clearly, it’s mostly done for decorative effect. I could easily imagine hanging one such image in my house (provided I could afford it, which obviously is not the case) — there are quite a few that I like. But however long I look at those images, the idea of a larger sociopolitical thought just won’t come to my mind (which is fine btw, I don’t need all my art to be overtly political). In Traces, though, this is not the case. Some of the images very clearly point to a larger conversation about, to use photoland’s parlance, content instead of merely form. 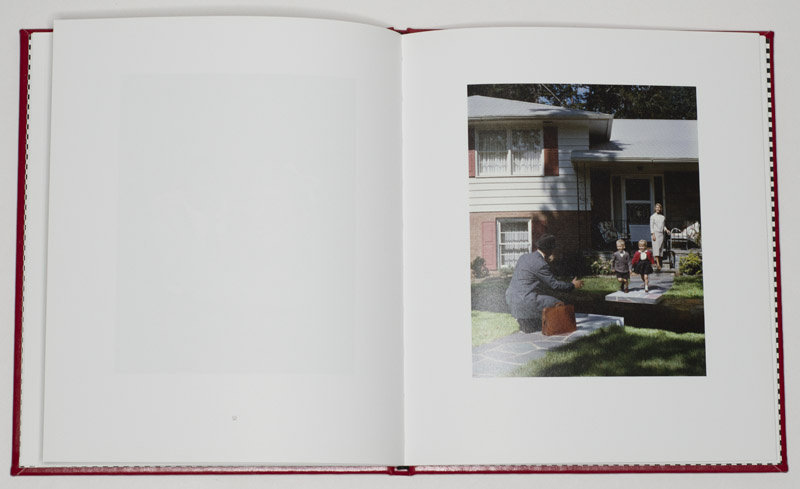 That image of the man with the woman’s face held in front of her is a political image in times like these where the usually aggressive male framing of how women ought to behave has become one of the most important topics of the day. I don’t live in Poland, but in light of the recent mass protests against the right-wing government’s attempts to tighten already incredibly restrictive abortion laws even further, for sure it’s a topic very much relevant there. Another very political image is one in which a man coming home from work is being met by his adoring family in front of their house. Brady Bunch aficionados will appreciate the presence of a moat, with the bridging element missing. I probably don’t need to spell out the various implications here.

In many other images, however, such implications are absent. A young woman tends to her garden, and a coil of gardening hose has enveloped her. A young couple dances in their wood-paneled basement, but the ceiling is so low that their heads are cut off. Etc. The book thus weaves in and out of images that look like they were done for the digital trickery and images that transcend the trickery to openly speak about larger issues. As I said, I don’t need to decide which one the focus should be on. But I don’t think that the combination works, because the occasional (let’s call it) promise of a larger message ends up ultimately being unfulfilled.

In a sense, the above is the curse of the source material. As I noted, by its original construction this kind of imagery contains a promise of a worry-free happiness that simply is being belied by the realities we live in today (let’s ignore the fact that even back then it didn’t hold up much). It’s not that easy to run away from this dissonance when you deal with those images. Ultimately Traces ends up pulling me back and forth between the photographic and the political, putting it into a spot that just begs for a resolution.