We don’t talk much about surrealism, possibly in part because we’re somewhat embarrassed by the fact that those Salvador Dalí posters we hung up in college in retrospect offer a lot less now than then. Of course, surrealism encompassed a lot more than that (if only they had sold Max Ernst posters back in the day!), but its ideas seem mostly dated. In photoland’s narrow confines surrealism never played more than a niche role anyway (the surrealists loved Atget but not necessarily for the reasons used today).

That said, surrealism provides a great entry way into Sohrab Hura‘s The Coast. The artist is an adept image maker, relying strongly on both his tools — strong flash combined with vivid colours — and his intuition, the latter of which for the most part creates the somewhat frantic and at times unsettling atmosphere that’s pervasive in the book.

Hura knows what a good picture looks like, and he also knows of the effect his pictures have on audiences. This is a good combination, but it’s also one fraught with danger: it’s so tempting to be dazzled by one’s own skills. 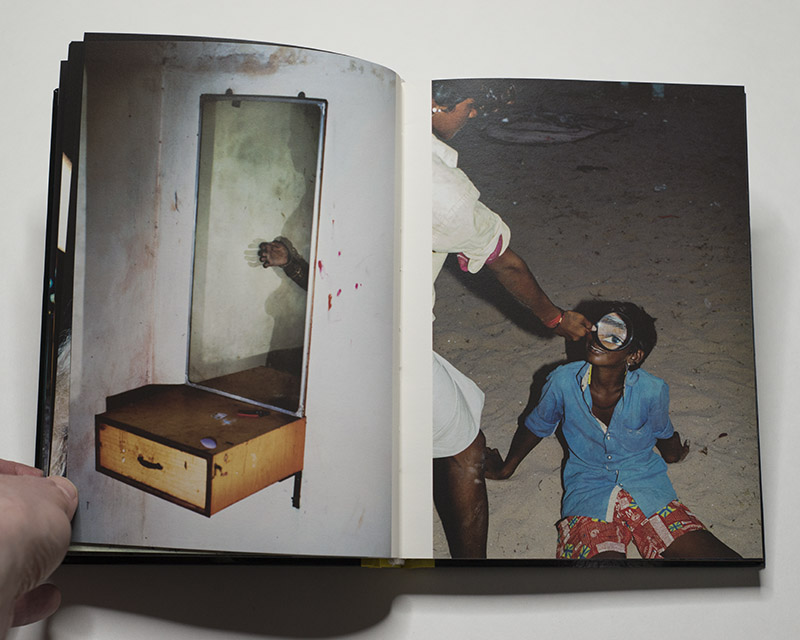 The book is subtitled Twelve Parallel Short Stories. Going forward, I’m going to ignore that particular aspect completely: in a nutshell, these twelve variations of the same short story lack the maturity of the rest of the book (the original short story appears right at the beginning, and the variants are then presented at the end, with — oy vey! — the variations even highlighted).

It is the pictures that carry the book (and that anyone approaching the book will remember anyway). These pictures are presented — sequenced — in a very interesting fashion. In each spread, a picture is paired with another one (with the exception of the white strips in the gutter, the pictures are presented full bleed). But each picture is paired with two other ones at the same time, thus appearing in two pairs. The overall idea reminded me of the kind of Western folk dancing where two groups move in interweaving circles around each other. If I were to describe the device with characters, it would be A B – C B – C D – E D – E F etc.

This particular device is ambitious because every pair of images has to work, but each photograph also has to be able to work with two other ones (and not just with one as is usually the case). At the same time, the repetition of one image at any given spread draws the viewer in very forcefully and places the focus a lot more on the photographs than on the sequence itself (and its resulting implication). To be honest, of that sequence I only remember that it ends up in the water (ocean), which, given the strength of the preceding parts, unfortunately feels too anticlimactic. 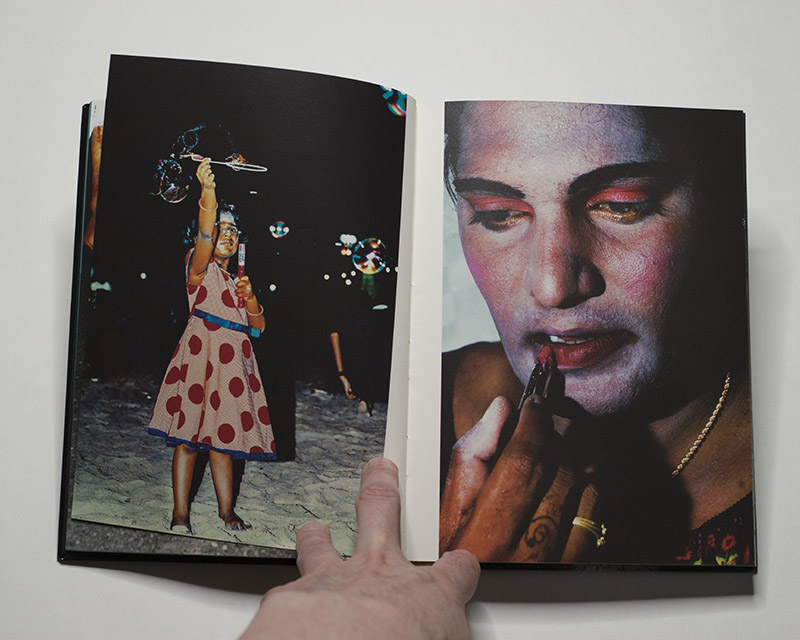 So those pictures… They’re visceral, in part by design (heavy flash, vivid colours), in part through what one might call their subject matter. Now, I want to apply the breaks here already and point out that a photograph’s literal subject matter (what’s depicted in the frame) isn’t necessarily the metaphorical one (what’s implied through both what’s depicted in the frame and how it is depicted). It is not clear to what extent the subject matter is found or staged — I don’t think it matters. But it’s a world where the border between playfulness and insane violence is not defined: this is what had me think of surrealism, because subconscious ideas can be found splattered all over those pages.

Hura isn’t necessarily approaching new territory here. I find echoes of both Lieko Shiga (in particular her masterful Rasen Kaigan) and Feng Li, to use two contemporary non-Western photographers who of late have managed to breathe some fresh air into aforementioned narrow confines of photoland (that, let’s face it, still smell too much like mothballs but maybe in another decade or so things will be better). With Shiga, the Indian artist shares the creation of a surrealist parallel world — maybe one accessible through some portal if one were to pay enough attention. In both cases, strong colours play a role — Shiga’s often look as if achieved through cross processing. Li’s world is more “straight” — the pictures look found, but it’s very strange nevertheless. Crucially, though, there is a strong sense of humour in Li’s work that I feel is absent in The Coast.

This absence of humour is what would make me pick Hura’s book over White Night (assuming I’d have to choose just one). The pictures are equally strong. But I’m interested in the world that is being presented in The Coast, however strictly in a surrealist sense. There is, after all, the fact that the photographs are clearly located in India, and some of the images very clearly and graphically depict stereotypes of that country. 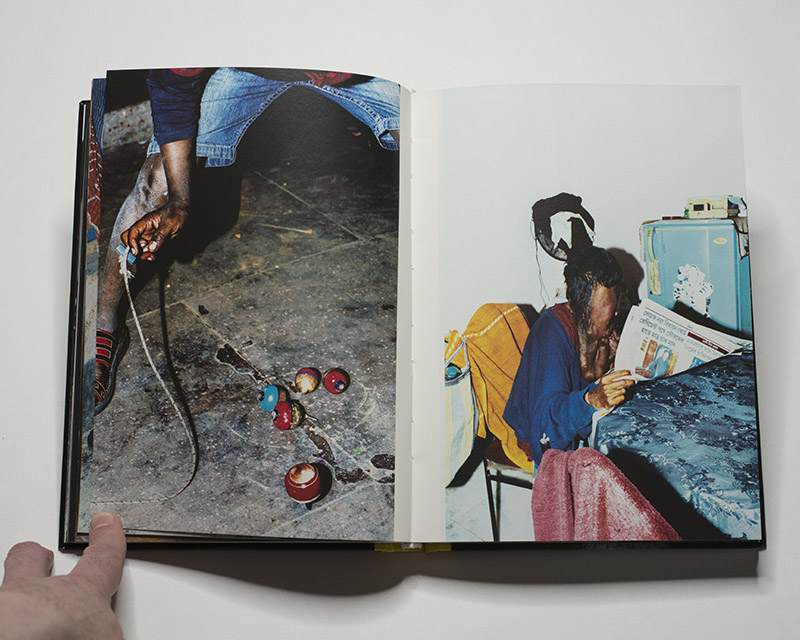 I have been asking myself whether or not my viewing of the book as surrealist is not a mental escape door that I managed to set up for myself so I wouldn’t have to face the fact that I am too engrossed by something I really shouldn’t be enjoying that much. I don’t think that’s the case, though. Frankly, the problematic pictures (problematic if approached through the location and said stereotypes) consistently are the weakest, least interesting pictures for me: they end up being too literal without having any metaphorical power. They feel like they were included too much for effect (that’s that danger I spoke of earlier). That said, I am a bit worried that people will remember the book exactly for those pictures.

In summary, The Coast is an impressive achievement by an artist who very clearly is a very adept image maker, but it’s not without problems. I suspect because of its flashiness it will make it onto many of those completely unfortunate “best of” lists that inevitably flood photoland at the end of every year. If the book would indeed by remembered for said flashiness, and not for the many great pictures that aren’t superficially flashy, that would be too bad. Or maybe not — after all, that’s me putting my own ideas of a why a book deserves to be remembered onto things.

Rating: (no rating, given the various aspects discuss above, which cannot be easily incorporated here)