In this day of iThis and iThat, we’re all kings or queens of our own domains, as much – or as little – as we might actually feel like one. This man, with his paper crown, sitting in front of a cheap plastic table on top of which there appears to be only alcohol, makes for a sad king; and he seems aware of it. This man lives in Manhattan. Manhattan here lies somewhere in Eastern Germany, in a small village around an hour’s drive from Berlin. There are two apartment blocks in the village, one shuttered; they are called Manhattan. Many parts of Eastern Germany have been hit pretty hard by reunification. iThis and iThat arrived, but jobs didn’t. Neither did the prosperity promised by former Chancellor Helmut Kohl, whose “blooming landscapes” metaphor famously has become a bitter joke for still living in areas that often share much with the American rust belt, say.

Stephanie Steinkopf spent quite a bit of time with the people in those 12 apartments still inhabited (judging from a picture of the blocks, I’m guessing there are around four or five vacant apartments for every one still in use). She knows the region well – this is where she grew up. The resulting body of work (Manhattan—Straße der Jugend) portrays those left behind when East Germany’s socialism was replaced by West Germany’s capitalism.

Of course, ideologies are simple and easy – that is why they’re ideologies in the first place. Even some of the basic facts of the systems ruled by ideologies are simple and easy. The problem usually is that those facts cannot be reconciled, even compared. East Germany offered a job and a home for everybody, and it was a hideous dictatorship. Germany offers a job for many and a home for almost everybody, and it is a stable democracy. How do you juggle these different worlds, though, when you’re one of those who had a job doesn’t have one any longer, when you grow up without a job and without much hope, hearing from your parents that it used to be different? 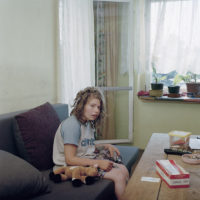 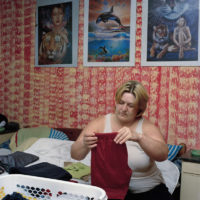 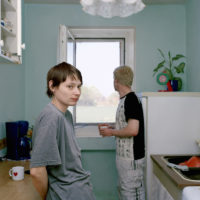 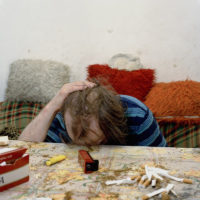 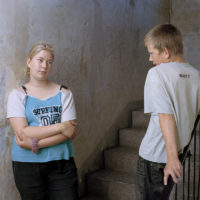 What makes this all so complex is that it’s so easy to just produce simple value judgments. Of course, a free democracy is vastly preferable over a dictatorship. But then, having a job is preferable over having none. And of course if you have a job, it’s easy to talk about those who don’t have one. But the reality is that some things just can’t be compared. We might be better off accepting the contradictions, instead of outright pretending we can ignore them – that then might be a good opportunity to work towards resolving them, or at least fixing what needs to be fixed, in whatever incremental ways that seem to fall so short of representing the sweeping, grandiose ideas of the ideologies.

Steinkopf is one of those socially concerned photographers who these days make one wonder whether they have come from a different, earlier time. Full of convictions and earnestness, she cannot and will not just accept “the realities” (it would be too simple to take her convictions and earnestness as something stereotypically German). Instead, she sets out with her camera to document what she feels has to be documented, because even if things might be good for many, perhaps most people, it could still be better – a lot better for some, possibly many, maybe even possibly most.

What this means is that photographers still need to go out to take all those pictures. But the onus is not on the pictures, and it’s not on the photographers. It’s on us, each and every one of us, regardless of whether we take pictures or merely look at pictures. We get so see photographs like those in Manhattan, and we then make decisions about what to do (there’s a book, btw – the first two self-published editions are sold out, alas; maybe a publisher will now step in?).

As a photographer, you can thus only hope for the best. You release your pictures into the world, just like you’d throw a stone into a lake: Hoping that the ripples will move out farther and farther without just dissipating.