Andrew Miksys‘ Baxt is a portrait of a small community of Roma in Lithuania (see the interview I did with him a few years ago). After photographing his subjects and producing a book, he made sure to hand out prints and copies of his book to those who so graciously had agreed to pose. Photography plays a special role for the Roma, Miksys noted (all quotes from an email the artist sent me):

“Family is one of the most important aspects of life in the Roma community. And the ties between family members and the past is often kept alive through photography. I didn’t really know about this when I first started photographing. But then I began to notice that even the simplest Romani home with very few decorations usually had photographs of family members and ancestors on the walls.”

Coming back to the village later, to organize a music festival of Roma and Lithuanian artists, Miksys decided to re-visit his previous subjects to photograph the family photographs for use in a slideshow during the festival. That is when things got interesting:

“It didn’t take long to realize that I would be re-photographing my own photographs. I found pages torn from my book and hung on walls and other photographs altered in ways I couldn’t even imagine.”

“Leshka (the man standing in the snow) was cut from my photograph and placed on a new background. The frame is broken and there is broken glass stuck to the photograph. Sadly he died shortly after I photographed him and this is a photograph to honor him.” 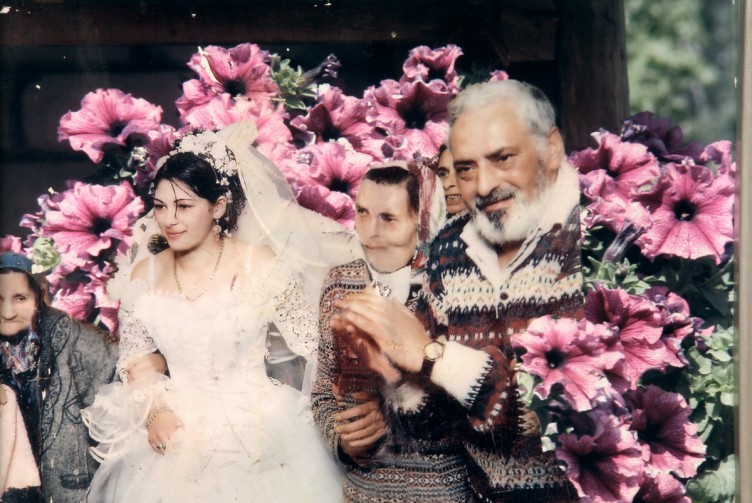 Another case was equally amazing: “I had given Luiba (the bride) several photographs from her wedding. In her house I found a single photograph stitched together from many other photographs. I’m not sure where the flowers came from.”

Calling his portraiture a collaboration with his subjects, Miksys applies that term to this use of his own photographs as well: “The collaboration went to a whole other level.” It might be safe to say that few, if any, of the regular readers of this – or any other photography related – website would simply tape their portrait to a wall or would ask someone else to Photoshop it for inclusion in a family gallery. But I think there are very powerful statements about photography being made here.

Aren’t we dealing with two very different ways of fetishizing photography here? On the one hand, we have people who hang them in very expensive frames in white spaces that looks like fancy hospitals and then ask an insane amount of money for them. (How do we justify having to pay thousands of dollars for a piece of paper again?) On the other hand, we have people who tack or tape the photographs on a wall or happily have someone change them so what they feel matters comes out more strongly. 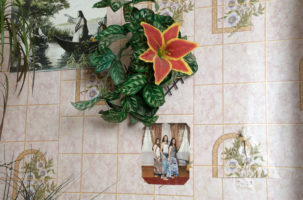 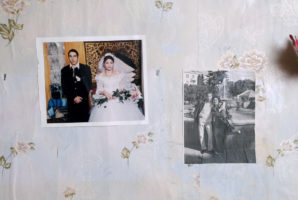 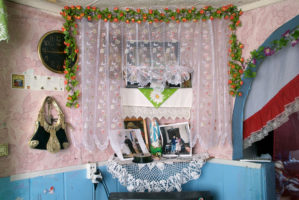 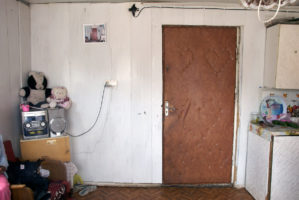 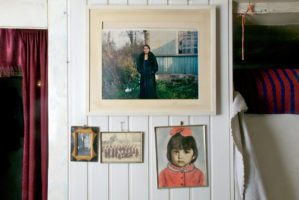 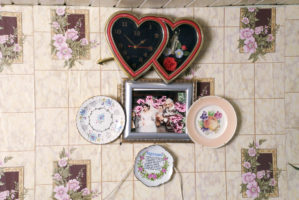 We could try to think of these Photoshopped photographs in terms of the theoretical frameworks we love to construct around pictures. Isn’t this “outsider appropriation art” here? Then again, what exactly do we gain from doing that? Aren’t we art people the outsiders who treat pictures in ways that certainly must strike most normal people as essentially insane? The vast majority of people who love photography literally cannot afford buying a photograph and are reduced to, at best, looking at them as often bad reproductions in books. How much sense does that make? And why should only the creator of a photograph decide what can be done with it?

What I love about Baxt Revisited is the photographer’s embrace of what is happening here. After all, the use of his photographs by his subjects points at how powerful and meaningful photography can be. It’s hard to forget that especially when one spends too much time online, reading articles about how supposedly photographs don’t matter any longer.

Photographs still matter very much to many people, in ways that are too often forgotten, overlooked or ignored. And this is true not just for Andrew Miksys’ subjects, it is also true for most other people, as different as their use or re-use or engagement with photography might be.