Looking at Ke Peng‘s Salt Ponds for the first time, I had the feeling that I was not being given full access to the world presented in the book, China (or rather the parts photographed by the artist). That irritated me and had me put away the book for a while. But a book that irritates me at first or maybe even for longer is more interesting than one that is unable to produce any reaction, emotional or otherwise.

My second observation was that there was a red thread going through the book in the form of the tackiness of the objects or environments depicted in the photographs — a tackiness that I might not be able to recognize as easily had these photographs been taken in, let’s say, the US or Germany, locations I’m much more familiar with to the extent that I’m blind to many of their visuals.

Of all the things we can say about this world, ruled by anonymous corporations and, increasingly, by dimwitted authoritarian neofascists whose only skill is to whip up discord and anger, isn’t that one thing we don’t talk about much, namely how incredibly tacky and/or outright infantilizing so much is that is being made to surround us?

I actually believe that to show that tackiness is in itself a political act: it makes us see, and it gives us a chance to see more clearly. (Photography is political if — and only if — it does that.) 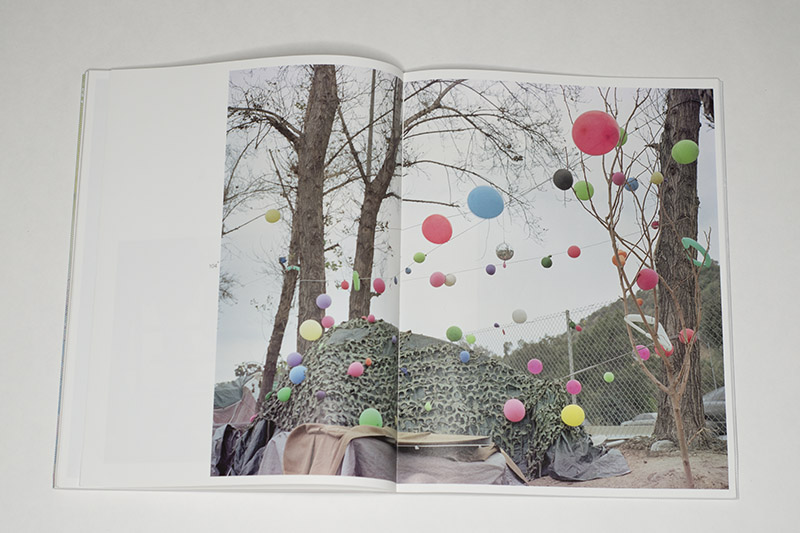 Placing that tackiness all around us is a political act as well: it tells us very clearly what those doing so think of us.

Coming back to the book, these two aspects became clearer to me, and I couldn’t decide what this spot was that I was given as the viewer. I tend to be reluctant to have my own reaction make me think about a photographer’s intentions (that first, I have no access to, and second, I’m usually not all that interested in because I only have the pictures that might or might not communicate those intentions). Still, though, I was wondering why the photographer had decided to keep her subjects, the people who appear in the pictures, so far away from the camera. (Thankfully, there are people in some of the pictures — without them the book would be absolutely dreadful.)

The first person we encounter is a middle-aged man sitting on a bed, his front facing away from the camera. Further, there are three young women, clustered around the hand of one of them — what they’re looking at we can’t see. There’s a group of four older women (tourists maybe) standing in front of some statue — the camera is far away  (one must have left what might be her bag a little behind — this does stand out to me). And it continues with this kind of strategy.

The person we’re closest to is an old women who looks at a smartphone with a magnifying glass — but it’s her hands that (maybe inevitably) are the center of the photographer’s attention. There almost is a portrait in the book: a middle-aged woman stands in front of a white wall. But the camera puts the image on her shirt — a cartoon of some sort of fairy holding on to dandelion seeds — into the center, cutting off most of the woman’s face. 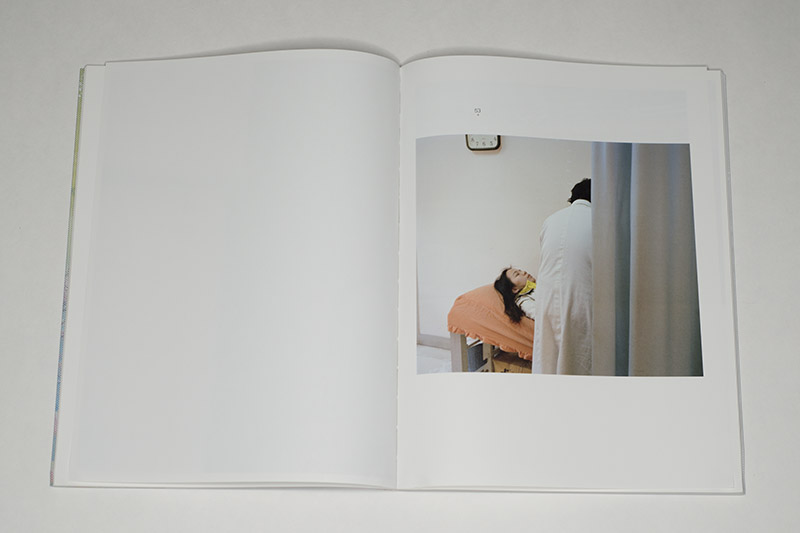 As a viewer, I’m being denied more access to these people. That must mean something — or speak of something. What is that, though? I’m not sure.

With one exception — a center-weighted photograph of what might be a toy hand grenade holding candy — I’m mostly drawn to the pictures that focus on little observations. These all seem less pointed and less hesitant to maybe dive in too much…

See, I am putting a read on things — I just can’t help myself. But there clearly are those two options, namely that the photographer was hesitant (or unable — the infamous Mamiya 7 problem) to get in closer or that she didn’t want to because staying at arm’s length is communicating something. I can’t say what’s making me think it’s the former.

Well, anyway, it’s the small observations that are often touching because more often than not they reveal a resistance of sorts against the otherwise drab or tacky environment. And this is what we all do, isn’t it? Small acts of resistance that we don’t think of as that, but that are indeed more than just some idiosyncratic way to organize or embellish the spaces we live in (especially the ones we can control only to a small degree).

There’s an interview with the artist in the middle of the book that I wish it weren’t there. In general, I don’t think it helps a photographer when they’re trying to make their intentions clear or when they try to explain their own work and motivations. Of course, I realize that that’s increasingly the case. Maybe this is a consequence of the increasing competitiveness in photography, coupled with most photographers being aware of the fact that they relentlessly think they need to define and promote their own image through social media. 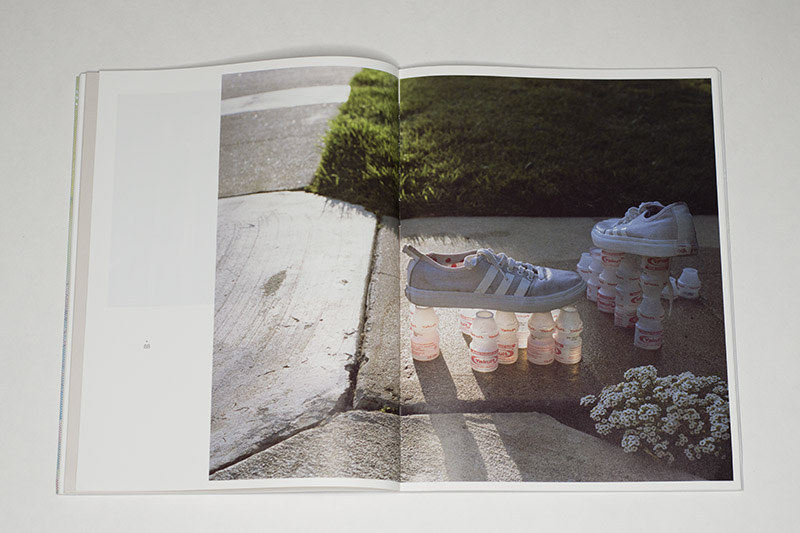 The problem (at least for me) is that when you package your work with such material, this approach instantly reduces the way the photographs can be seen, possibly vastly (maybe the most extreme example I’ve come across of late is Alec Soth and the interview in his latest book). So people can either see the work just that one way. Or they see it differently, facing them with the decision whether to distrust the photographs or their maker (or, as I think is much less likely, distrusting how they see).

If as a photographer you want to be an artist, you really have to resist the temptation to package yourself. And even if you’re fine with merely being a photographer (why not? – after all, art is difficult, but making photographs is easy), then the packaging still runs the risk of essentially turning you into some sort of editorial photographer who is following her or his own assignments. (Ugh!)

That all said, the world presented in Salt Ponds still intrigues me, as much as various aspects of it repel me (I’m talking about what’s in the pictures here, not the pictures themselves). I think that’s an achievement, given the surroundings Ke Peng photographed in. I’d love for the artist to push in a lot further and be less furtive. This being her first book, I’m thinking (hoping) that throwing all caution overboard might lead to the next one, the bolder one. I’m looking forward to that one.