If there’s one thing photography does well it is to faithfully depict the surface of people and objects. In a nutshell, that’s all you get, the surface, projected onto the photographic plane in that simple manner that makes the medium so perplexing. Ignoring aesthetics, photography really isn’t any different than what our own eyes have to offer.

For example, when we look into a loved one’s face, we have no way of knowing what is really going on in their mind (and vice versa), however much we would love to think or pretend otherwise. All photography does is to freeze these moments, to give us minute chunks taken out of the continuum of time, presenting us with the loved one’s face that might have changed into something completely different just a short moment later.

In real life, we have some hope of having the flow of time come to our rescue, of providing us with a plethora of information – instead of that one photographic bit. But in reality, often enough we’re just as much at a loss what’s going on as when we look at a picture. What we know of someone else’s inner life we have only access to if it is communicated, and the communicated really is just another, fancier, form of it being mediated (if you don’t agree, ask any therapist – seen that way, photography critics often enough are really photography therapists: you have strange ideas about photographs, we’ll set you straight; the only difference being that therapists tend to make a solid amount of money, and critics don’t).

We have more hope understanding the inert, non-animalistic world around us, regardless of whether it comes in a primordial form or is merely the result of human activity. But even then our failure to look properly, to see and understand what is in front of our eyes leaves us with a woefully incomplete, if not flawed picture of the world.

If photography critics often take on the role of therapists, so do photographers. Ideally, that’s what s/he will do: make us see, provide a mediated interpretation that might bring us a little closer to a different reality, a reality that does not replace our own, but that enriches it. Photography is nothing but interpretations layered upon interpretations, with each additional human component adding another layer. This makes this oh-so technical medium the worst, well, the least bad of all ways of humans mediating and communicating the world around them (just witness the seemingly never-ending discussions in photojournalistic circles about truth, about how much manipulation is allowed, etc. – essentially a battle that can only be lost, given it’s fought on an absurd ground).

Photography excels where its limitations are understood, where everybody takes the medium for what it is. It is here and then, where we can get the most out of looking at pictures of surfaces, frozen in time. I had to think of this during a recent visit to São Paulo, a city I had never visited before, a city that I had not researched at all before going there. It’s not that I was (or am) lazy: it’s just that my priorities are a little different. I’m really not a very good tourist, and I don’t aspire to be one: you have a great art museum in your town? Well, that’s nice, but I’d rather walk around in your neighbourhood to see what life is like where you live. 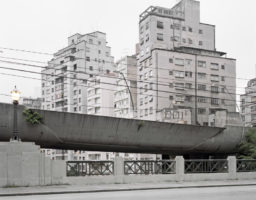 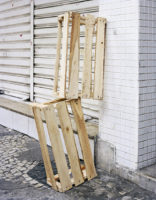 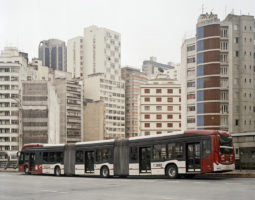 I had no idea of the city’s scale (it is huge), its spatial composition, its history as a city. One of the things I truly love about going to a city I don’t know is trying to infer – or maybe sense – the latter. Cities, after all, are living entities (however vibrant or morbid they might be) that constantly re-invent themselves, that constantly shed some skin (or part of it), to reveal another, newer one. What I’m most interested in is a city’s patina, the traces of all that was. Cities without patina bore and frighten me at the same time: a city made to look as if it had no life other than the current one is like a face frozen through Botox. It’s not alive any longer, it’s an abomination.

From what I was able to tell during those few days I was there, there is considerable patina in São Paulo. Only while being there did I realize that Felipe Russo‘s Centro, which the photographer worked on during his time as a student in the program I teach in, essentially is about that, the city’s patina. Or rather it is about the city and its life, using the patina as a tracer.

As I noted above, photography only captures surfaces, which often makes it hard to get beyond the obvious, to capture that which cannot be (easily) seen. But the patina isn’t obvious – quite on the contrary. The patina isn’t even just the physical surface of things, the grime and dirt left over on buildings, the paint flaking off. It is also the physical arrangements of things left standing around, however temporarily. It is where (and how) the city as a physical object meets with whatever it is we do while living there.

Russo’s photographs are about just that. There are photographs of the cityscape, pictures that derive their beauty from the photographer’s ability to construct wonderful two-dimensional representation from three-dimensional blocks of all shapes (São Paulo’s aren’t all simple, mindless, infuriating cubes, which makes the city a sight to behold in its own). You couldn’t make these pictures in, say, New York City, because there you would end up with advertizing in every picture. São Paulo has banned large-scale advertizing, so unused facades of buildings are blank, where they don’t contain the remnants of paint bombs or artful looking graffiti. The effect is similar to driving into Vermont from any other US state – suddenly, all the awful huge billboard advertizing crap are gone, and there is a real landscape to be admired. 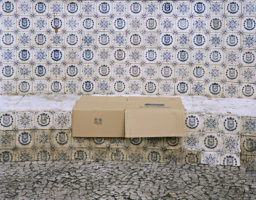 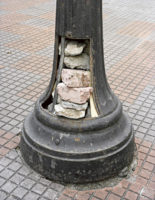 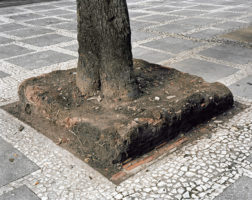 But Centro isn’t merely a collection of cityscapes. There are a few. Most of the photographs show bricolage-style objects, found somewhere and photographed, such as, for example, a couple of palettes stacked on top of each other in a way that makes the viewer think of a purpose other than stacking. None of the objects are precious in any sense. But through Russo’s camera they become precious in the form of photographs, speaking of the city and those that live and work in it.

There’s a bit of an anti-Walker Evans instinct at play: the photographs are not so much about the city itself, about the jumble of signage or non-precious objects, as about the gestures, however big or small, that made all that. This will get me into trouble with Evans fans, but still… As much as I admire this photographer’s work, it still seems more photographic than anything else: ultimately, it’s about the pictures. It’s about being visually clever. It does make us look at surfaces, but it doesn’t always invite us to look deeper, beyond the photographic.

Maybe that’s one of the biggest weaknesses of what we might call “art photography,” that instinct to make sure that if there is any doubt, it’s more about a picture being a clever picture than about what it might hint at (clever in the sense of the photograph being a good picture, employing the medium’s criteria – there’s material for a future article here).

Centro doesn’t only feel clever in that way. While the photographs are, of course, organized in ways that make them work, they’re not just about that, about a photographer’s ability to skillfully and pleasingly organize a three-dimensional jumble of things in a two-dimensional plane. They’re also not only about this aspect of “Look, what I’m making you see here.” While that is a (necessary) part of it, there is more: they are about a photographer noticing the city’s life through what was around him and bringing it to the viewer, by means of photography. And that difference might strike you as minute, but it is the crucial point.

During my visit I told Russo that his work made me think of someone from the Düsseldorf School doing their work, but then bringing a human sensibility to it. Where so many photographs coming out of Düsseldorf feel like they were taken by uncaring automatons (at least on the surface), Centro is filled with emotion; and the step from the photographic to the emotion never is very far.