After Richard Avedon published In The American West, John Szarkowski declared “Avedon’s West is not the West as I know it.” (for more details about this body of work’s reception see Avedon at Work: In the American West

) It was as if the famous curator had completely forgotten some of his own most essential lessons of photography, finding himself completely under the spell of the West. The West is a place that works well as a big canvas onto which to project one’s own ideas, just as it is a reflection of our own perceptions.

Needless to say, what makes Avedon’s work so good is exactly that it’s Avedon’s West and nobody else’s. The mythical West is a horribly trite place. The West as created or re-created by someone with a vision, however, usually is anything but. And the real West… Well, there is no such thing. The place is so loaded with myths and stereotypes and ideas and ideology that, geographically huge as it may be, there is no real West. There only is what you decide to make of it.

Tim Richmond‘s American West – depicted in Last Best Hiding Place – can be placed anywhere onto the continuum that has the myth at one end and the artist’s unique vision at the other end. It’s a place filled with characters and locations that manage to be specific and completely generic at the same time, with a rough, somewhat hurt, tenderness underneath. I can’t help but think that the photographer is very much aware of what he is taking pictures of, given there appears to be a balancing act at play: Every stereotype is depicted, to be subverted right away or elsewhere. There are cowboys, sure, but they have baby faces underneath their stubble. 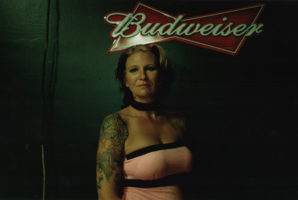 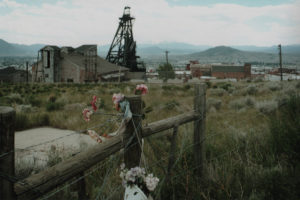 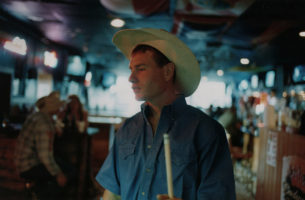 Richmond’s West ends up throwing stereotypes and preconceived ideas back at us, reminding us that what we’d like to think of as real is really of our own choosing. What we find is what we’re looking for. Here, photography comes full circle, because it is always at least that: A quest for that, which we already know. And as long as we’re not deluding ourselves into thinking there’s more, we’re in good shape.

I’ve written many times that photography really only excels when it’s being done with its own limitations in mind. These limitations arise from the technical nature of the medium in more ways than one. The properties of the camera have as much to do with it as the fact that a photographer is pointing the camera into some direction, at something in the world.

A long time ago, photographers were able to point their cameras at the world, a world not weighed down by preconceived ideas and earlier photographs. Now, when you point your camera at the world, you’re really pointing it more at all those images in our minds than at the world itself.

The secret then is to make this work, to produce photographs that can still stand on their own, while acknowledging all the ones that came before them. Tim Richmond‘s Last Best Hiding Place does just that, and it does it well.