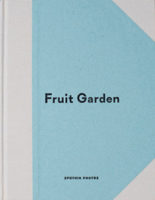 In 2008, the photographers forming the Sputnik Photos collective began traveling across the former Soviet Union, to document what was left after that country’s break up. Now, not quite ten years later, what originally were separate pieces turned into the Lost Territories Archive (LTA). From this vast archive, containing thousands of photographs, exhibitions and publications have been produced, the latest one being Fruit Garden. In each of these cases, the individual members of the collective gave up authorship over their own pictures, to have them exist in a different, larger context — a bold and ambitious endeavour that is not very common at all in the world of photography.

Fruit Garden is a challenging book, because it takes one of the craziest ideas behind the Soviet Union at face value, namely that everything can be made to work in a very specific way if you just believe in it and you see it through. Compared with some other scientists working in the Soviet Union, Ivan Vladimirovich Michurin might not have been the zaniest, but still, his ideas were met with more or less universal rejection in the rest of the world. And Michurin ultimately comes to stand for the country’s leaders themselves, who, after all, were engaged in one of the largest experiments ever done, namely to build a new society (that really was just a murderous dictatorship on a very large scale, whose consequences are still with the world today — just ask the people in eastern Ukraine living under de facto Russian control).

As a consequence of the underlying idea, the book presents a set of chapters titled experiments. How and what these experiments might be isn’t entirely clear. There is some sort of logic to them, and ultimately they’re all equally disturbing as violence or its consequences are never that far away. This makes for a challenging and engrossing book, a book that resists easy reads, asking its viewers to re-visit it. I’m hoping that we’ll see more books along the lines of Fruit Garden — not just from Sputnik, but also from other photographers. Especially these days, giving up one’s authorship and then creating new ideas out of existing material is a promising approach to a medium that to such a large extent is dominated not by what a photograph shows or where/when it was taken, but how it is used.

Without at least some sort of founding or underlying myth, a country is likely to have a hard time. As the many problems demonstrate that countries such as Belgium encounter, it’s very difficult to create a cohesive country if there isn’t something else other than sheer administrative convenience (the same could be said for the European Union, which somehow has become completely disassociated from the ideals that formed its original basis).

For example, in 2005, Semir Osmanagić discovered the so-called Bosnian pyramids, a cluster of hills in Bosnia and Herzegovina that, he claimed, were “the largest human-made ancient pyramids on Earth.” They’re not. It’s complete baloney. But still, for the country itself, struggling from a severe lack of self confidence, there now was something truly amazing and Bosnian to be celebrated. It’s easy to make fun of the idea. And go ahead, if you’re from a country that doesn’t rely on some very obviously nonsensical myth for its own existence.

Thomas Nolf‘s Peculiar Artifacts in Bosnia & Herzegovina focuses on the supposed pyramids, using all the many different devices available for photographers today, effortlessly blending the fictional with the real. What is fiction anyway? If deep down you know something isn’t true, but you believe in it because you want to believe — isn’t that the condition of today’s world? Seen that way, the book is not just a very engaging example of what can be done with text and pictures, it can also help us get a glimpse of the often fraught relationship between facts, fiction, and beliefs.

In today’s parlance, the existence of the Bosnian pyramids is fake news. But given we have somehow lost our ability to have those who believe in fake news engage with those who don’t (note that someone’s facts are always someone else’s fake news), maybe Peculiar Artifacts in Bosnia & Herzegovina can give us some pointers how to engage with it in ways that will help us all — not just those of whatever side we happen to find ourselves on.

I can’t look at the cover of Harvey Benge‘s The Lament and not think of the role such animal carcases have played in paintings by Francis Bacon (this is an example). I’m certain that even if I did not have those images in my head, I would absolutely not buy the artist’s claim that the book “is an investigation into the nature of things and is a celebration of the democracy of images”. Leaving aside the fact that those words are a bit vague, the book really is also really not. You don’t put a photograph of an essentially crucified animal on the cover of your book if your concern is the democracy of images.

“The pictures look at the unusual and the perverse.” — that’s more like it. The book does paint a picture of a fairly grim and gruesome world where even the possible escape provided by sex (not even to mention love) is fraught with uncertainty and likely disappointment. That’s rough, but too few photobooks these days offer something truly rough or maybe I should say psychologically rough. The pictures in the book, a few examples and the cover image excluded, aren’t necessarily rough at all — it’s how they’re combined and make to work together that does the job.

As someone whose photographs I see as mostly singular observations, with this and his previous book (reviewed here) Benge has revealed himself as an artist who is very adept at assembling those photographs into larger narratives (however amorphous they might be). It’s the kind of visual literacy concerning one’s own photographs that many of us (me obviously included) would be lucky to have. I hope there will be many more of books like The Lament. As much as I enjoy the artist’s zines, I think it is here, in these expanded, more ambitious books where it’s really at.