Given all the hype around narrative-based photobooks that might or might not make use of archival materials (possibly using facsimile reproductions) I’ve been feeling increasingly bad for all those photographers who “merely” take pictures without being concerned at all about any of that. As nice as it is to see a book that tells some story, I derive equal enjoyment from seeing what you could call a collection of individual pictures that somehow speak of something larger, but that mostly remain there. There is, after all, a lot to be said for that kind of photography.

To begin with, where narrative-based photography often gets away with a lot of crummy material, this type doesn’t. A picture that won’t hold up simply won’t hold up, instead of serving as a segue picture in a sequence. You’d imagine it must be pretty simple to make a good photobook if you have no narrative to contend with, but that’s not true. It’s just as hard. After all, even in the absence of narrative the edit and sequence matter. The challenges of putting the pictures together are just as big, if not bigger.

I have been following the work made by Carla van de Puttelaar for quite some time. In a world of photography that too often is geared towards either novelty or working from one fair to the next, this particular artist appears to be immune to those kinds of concerns. Much like her colleagues Hellen van Meene and Awoiska van der Molen, Van de Puttelaar continues to explore her artistic sensibility at her own pace. In this particular case, it’s all about the fragility of the very surfaces photographs can describe, here mostly the skin of women and, as a somewhat recent addition, the textures of flowers. For me, there’s something refreshing about artists not following the hectic flock, to dive deeply into what they’re concerned with.

Adornments now presents photographs made over the course of the past six years. Specifically, the book showcases a handful of different bodies of work that blend into each other very organically and that consequently are presented in an intertwined fashion (as opposed to a simple catalog approach, where a viewer would see the pictures grouped into the projects). Visually, the photographs all operate along the very same line of a body, body part, or plant emerging from darkness using the kind of somewhat cold Dutch light coming in from a window. The book then weaves around what the light reveals, how it helps the camera describe a surface, whether it’s the gnarly bark of a tree, the d(r)ying petals of a flower past bloom, or the skin of a young woman.

In many of the pictures, there is surprising little information, forcing the viewer to look carefully at what is being presented. In a picture of an arm for example, only partly visible against a sea of darkness, the blond hair is made to shine, forming a very delicate and fragile cocoon of sorts, a layer of protection that clearly wouldn’t withstand any sort of intrusion.

From what I can tell, the idea of the female gaze is becoming more and more discussed — a much needed development, given how dominant the male gaze has been in the history of photography (and elsewhere). If I were asked on the spot to describe the female gaze I would probably say that it’s a gaze that is content with how much can be revealed by not revealing it all — unlike the male gaze that just wants it all (and that, where it uses shadows or forms, tends to be always a bit too sure of itself). The female gaze’s default never is to sexualize. Instead, it is celebratory in a way that involves the artist, the subject, and the viewer — again, unlike the male’s, whose default is predatory and whose main mode of work treats its subject as something not equal, something only good to be ogled at. That’s why the dominance of the male gaze in contemporary societies is so toxic: it excludes, and it dominates (one could argue that the neofascism that is now threatening to destroy so many Western democracies — Trump, Orban, Kaczynski, et al. — is a political manifestation of the male gaze).

Coming back to the book, while all in all I prefer the minimalist pictures, some of what you could call the portraits here — young women being made to pose as if sitting for a classical Dutch painter — are absolutely stunning. Having said that, though, I feel that some more restraint in the editing process would have helped the book. There simply are too many pictures in the book, and I’m not sold at all on seeing so many variants of so many different pictures. That aside, Adornments clearly deserves to be seen widely.

There is ample talk of and interest in how photographs can operate alongside text. Photographer often assign text some sort of minor supportive role, which I can understand. But still, more often than not, it’s a mistake to do that. For a photobook containing pictures and text to work well, the words will have to operate on the same level as the pictures. If they’re not allowed to do that, the resulting discrepancy will reflect poorly on the whole.

There are plenty of good books that rely on a combination of photography and text. One of this year’s highlights for me is The Theater of War by Roman Ehrlich (text) and Michael Disqué (photographs). The book was published by Leipzig based Spector Books, a publishing house that doesn’t quite seem to get the attention it deserves. I have quite a few of their books, and they all deliver outstanding quality without ever being predictable.

The book centers on a German army camp in Afghanistan, part of what is billed as the Resolute Support Mission. In this particular context, one can’t quite leave aside the question what sense that mission still makes after 16 years (or ever made). Their government’s noises notwithstanding, I don’t think most Germans bought the case for German soldiers operating in Afghanistan. So the German military and government have had a bit of a PR problem, which isn’t made any easier by the pictures that can be made and used. The kinds of pictures the US military uses — soldiers engaged in brave combat — would probably remind too many people of World War 2: obviously is a touchy subject for Germans.

The Theater of War focuses on exactly that aspect of the war, namely on its depiction, more precisely on the uneasy relationship between what can be photographed because it’s there and/or allowed and what that might tell an audience back home. As far as I can tell, the photographs were all taken inside the camp, which definitely is not the most picturesque location. It’s the kind of place where wherever you look there’s no picture there: a non-place for photographers. Disqué is adept at taking the photographs: I can’t remember a single picture, even though I have looked at the book many times. But within the book, they serve their purpose perfectly.

It might be tempting to see the text as carrying the book, but that wouldn’t be fair. It’s true, the text talks about all the various things that cannot be photographed, and there are quotes by various sources. But it’s not as if there is a lot happening, either. In fact, text and photographs are engaged in this strange dance around something that really doesn’t seem to make too much sense at all: German soldiers being present in Afghanistan for reasons nobody really believes in. It’s like a very strange and heavily ritualized form of theater that, unfortunately, has cost dozens of soldiers their lives. 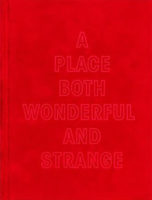 It’s no secret that in recent years, the book-publishing scene in Spain has not only blossomed but exploded, with numerous photographers, designers, and publishing houses contributing to the photobook boom we’ve been witnessing for a while now. Fuego Books was founded by Ángela and Gustavo Alemán, and they’ve published a number of very interesting books so far, A Place Both Wonderful and Strange being the latest one. This particular book is a diversion from their regular programming, though. It’s a centered on an idea, with a large number of contributors (photographers and writers alike). In their own words, the book contains “a narration inspired by Twin Peaks and the work of David Lynch.”

Up until the other day, I thought I knew how I would approach the review. But then last night, I had one of those realizations that will — hopefully — lead to some related, but vastly expanded writing elsewhere. So I’m not going to dive much into the whole Twin Peaks/David Lynch thing. I don’t mean this as a criticism at all, it’s just for a different day. That aside, though, the idea to bring together a group of artists, to have them produce work around the same idea, has always interested me. It’s an idea fraught with risk: as a producer, you basically need to rely on those artists giving their all, which, if you’ve ever dealt with artists, you just know is not a given. Herding cats is a lot easier and more enjoyable than working with a group of artists.

In the case of A Place Both Wonderful and Strange, the Alemáns’ gamble has paid off. The book is utterly engaging, without any of the weak sections that could have resulted from someone phoning it in or simply just missing the point. In fact, it holds up as a whole in ways that I might not have expected. In part, this might be because of what’s possible when you approach the topic Twin Peaks/David Lynch. In part, it definitely is because of the smart choices made here concerning which artists to involve. In the description of their publishing venture, Ángela and Gustavo Alemán note they want to make “Beautiful books. Dangerous books. Fiery books.” (their emphasis) So far, they have succeeded very well, and I’m looking forward to whatever it is going to be they’ll do next.