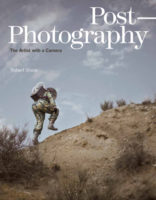 There is much talk these days of “post-photography,” and I’ll happily admit I have no idea what that is supposed to be. This might be in part because I have always been reluctant to use the term “photography” so narrowly that anything done outside of a regular darkroom already isn’t photography any longer. Seen this way, the term “post-photography” might speak less of what is going on in photography itself and more of a profoundly narrow idea of the medium that finally has become untenable.

It’s a bit like only accepting T-Model Fords as automobiles and then trying to understand a Porsche Boxter. Well, we got our “post-automobile” right here.

A new book by Robert Shore entitled, you guessed it, Post-Photography

now attempts to shed light onto what we might be dealing with. Reading its introductory essay didn’t help me much trying to understand “post-photography” better: “Post-photography is a moment, not a movement.” And from there it proceeds to rehash the usual talk of artists working with cameras or – gasp! – not even owning their own cameras, but still working with pictures.

Having said that, the book offers a very useful survey of a little over fifty contemporary photographers/artists. There are five larger chapters they are grouped into, “Something Borrowed, Something New,” “Layers of Reality,” “All the World Is Staged,” “Hand and Eye,” and “Post-Photojournalism.” Each of the artists is featured with a set of pictures, there is a short introduction, plus – roughly – a page of the artist’s own words, talking about parts of their practice.

Those looking for a more in-depth, critical examination of either the term “post-photography” or of any of the artists who are engaged in that practice will be disappointed. Make no mistake, it appears to have become common to let artists speak for and about their work, without much – or any – of a critical engagement. That’s fine, up to a certain extent. But I don’t think it necessarily furthers our understanding of what we’re dealing with.

Thus Post-Photography might serve as a useful – and attractively produced – survey of fifty three photographic artists whose work currently is en vogue. What this all tells us about photography itself is not all that clear.

Odd to now talk about the first book out of what promises to be a new series entitled Photographers References, given that it’s pretty much the complete opposite of Post-Photography. This first book centers exclusively on the life and work of a single photographer, David Goldblatt. Baptiste Lignel, the mastermind behind the series, conducted an extended interview with the photographer, covering a very wide range of topics, including, of course, the background of South Africa, the meaning of photographs with or without text, photobook making, and much more.

The book comes with various fold-out parts, which reference some of the photographer’s images or other material mentioned in the conversation. In addition, the book is laid out in such a way that a new question will always appear on the left-hand side, with the answer on the opposite page. Long interviews can be hard to read, but this one isn’t. I read the book in four sittings, and I didn’t feel I was missing anything, given that the book’s organization helped me stay focused (or become re-focused each time).

In the conversation, Goldblatt comes across as being very open to talking about his work, albeit at times maybe a bit dry. But as an in-depth introduction of a very relevant contemporary photographer, this first book in what I hope will be an extended series delivers everything it promises.

Mind you, this is not to dismiss these fads or trends. Without people declaring regularly that now was the moment where photography was boldly going where it had never gone before, the medium would be a lot more boring. Good for you if you’re up for pushing the boundaries (or at least attempting to)! Good for us, too!

Now there even is a reminder in the form of an anthology of many of those various trends and movements, about artists declaring what photography is or should be, in the form of Manifeste!, subtitled Eine Andere Geschichte der Fotografie [An Alternative History of Photography] (my copy of the book has translations of the various non-German texts into German; Steidl’s website indicates there is an English version).

The book is a lot more interesting and engaging than those who are suspicious of the idea of a manifesto might imagine. For a start, the facsimile reproductions of the original texts is a visual treat. What is more, the term “manifesto” is applied rather broadly, ranging from actual manifestos to texts or article around photography. (full disclosure: it wasn’t until I started writing this review that I found a piece I had written for the Böhm/Kobayashi Ant!foto Manifesto inside Manifeste!)

At over 400 pages, Manifeste! reminds us of how lively the medium photography has been defined or debated over the course of its own history. It would seem that soul searching (much like navel gazing) has always been built into the medium itself. Much recommended (the book, not the navel gazing).