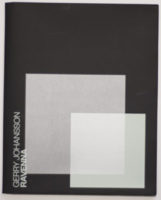 Gerry Johansson is the kind of photographer who could go for a stroll in my fairly small and not necessarily terribly appealing backyard and come back with at least one incredible photograph, maybe even more. His approach is one of quiet contemplation, as, I think, is obvious from his photographs. They’re like little gems that are found and shaped at the same time. In some ways, they’re incredibly calculated and carefully composed, yet they feel free and full of life (even where depicting locations that really aren’t).

Johansson gives equal consideration to the presentation of his photographs. In a day and age where print sizes easily approach and often surpass the scales of posters, his prints are, well, small. They don’t require larger scales. They’re pristine, well crafted, they’re intensely beautiful. The artist also has been producing photobooks, and most – but not all – of those are relatively modest affairs, too. So you more or less know what to expect, even though each new arrival is a complete revelation.

In its form, Ravenna provides another break from the tradition of Johansson’s books. The book (if we want to call it that) is housed in a large sheet of paper onto which the essay, title, colophon, etc. have been printed, and which has been folded four times (the design is supremely elegant, yet slightly at odds with the spirit of the photographs). The book itself is an unbound signature, 12 folios in total. Featuring Johansson’s square photographs, the book is a bit larger than the cloth bound objects the photographer became known for. What is more, the photographs are quite a bit larger as well. In addition, there are different sizes, there are pairings.

As before, I find myself in awe of the pictures. There are three sections whose titles are simply the first three letters of the alphabet. The largest section, the middle one, features the kinds of anonymous industrial landscapes Johansson appears to be drawn to. The shorter sections are more lyrical in tone, all in all, for me, there is a feeling of melancholy in these pictures, even in the ones that obviously were taken in bright sunlight. All is well and quite beautiful, I feel I’m being told, but there’s also a hint of sadness.

Form and function of a photobook ought to be in sync, and they’re not quite that here. They’re both beautiful in their separate ways, but this might not be the best form for these photographs. Am I nitpicking? I’m not sure. Am I just being conservative? I think not: all too often photobooks are too conservative (and boring), and they would have benefited from the treatment provided here. It just has to fit, though.

Regardless, Ravenna still is a gem. 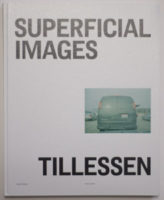 Superficial Images by Peter Tillessen is the kind of book that makes me regret having come up with my photobook ratings. The ratings are good and useful for the large number of books they easily apply for. But a book like this one tends to have me struggle. So what’s going on here?

To begin with, Superficial Images made me laugh. It wasn’t the desperate laughter over a book being so bad that it was almost comical. No, the book is simply funny. Now, with a German critic writing about a German photographer’s book you might have some comments concerning the idea of comedy. Outside of their home country, Germans are known for being good at a lot of things, humour not necessarily being part of those. For example, I once went through an exhibition of Hans-Peter Feldmann‘s work with students, and the only two people laughing were the (German) curator giving the tour and myself. Well, so it goes.

The idea of deadpan, for example, can be extremely funny to Germans, and here we are right in business concerning Superficial Images. The photographs in the book all look like they were taken with a point-and-shoot camera (with the film then processed in the “wrong” manner), and most of them aren’t very spectacular at all. But it is exactly that, their not-being-spectacular, that makes them immensely entertaining, especially given how they’re being combined with captions. The captions are either straight descriptions of what’s on view, or they’re completely made up nonsense (or maybe occasionally both). Because most of these photographs really aren’t very interesting pictures, the resulting effect is initially just baffling – until you decide to be in on the joke. It’s deadpan comedy, which, I’m pretty sure, won’t be very funny for those who struggle with the idea of deadpan in the first place.

Superficial Images was photographed on trips to the most nondescript places – even New York City is made to look just awful, and great fun is then being tickled out of exactly that. Beyond the comedy, there’s something intensely liberating about the book. It’s not just that it pokes fun at the pompous seriousness of so much of fine-art photography. It also uses photography in exactly the kinds of way we (in photoland) often wouldn’t even consider. There are a lot of pictures to be found all around us, and even the shitty ones might tell us something – if, and only if – we approach them with a different mindset. And let’s not forget that there already exists a canon of photography that ignores photoland’s insistence on the brilliant picture, instead finding the sublime in lousy pictures: think Ed Ruscha, Peter Piller, Hans-Peter Feldmann, and many more.

Michał Łuczak & Filip Springer‘s 11.41 is a collaborative effort by two rising stars of Poland’s cultural scene, one a photographer, the other one a writer. Dealing with the 1988 earthquake in Armenia, which then was part of the Soviet Union, the photographs and text are being presented separately to complement each other. Two sections of pictures bookend the essay, but things are being kept apart by the same card stock that also provides the book’s overall cover. It’s a nifty and simple way to keep things apart; yet it might also be a bit heavy handed.

You can’t photograph the past or people’s memories, you can only photograph what’s left. And even if what’s in the pictures speaks of the past in some ways, it can also allude to the future. How this works becomes clear in the two photography sections. The first showcases Łuczak’s colour work from around Spitak, the location of the earthquake. With the exception of one picture showing hands holding some religious cloth, people are absent from these pictures. Instead, there are their traces, many of them fresh enough to indicate they might be just outside of the frame. Photographing people’s traces is one of the most common strategies employed in contemporary photography. The older I get, the more impatient I become, though: if it’s about humans, I want to see their faces!

There are faces in the second section of photographs, the one that concludes the book, but they’re illustrations. In particular, this section presents images on gravestones, images of people who perished. These are good, in the way that one can put such a label on these images, but I wouldn’t have needed to see them. Of course, they’re idealizations of whomever they depict; what these photographic fragments tell me beyond the obvious I’m not sure, though.

Sandwiched between these sections lies the essay by Springer who traveled to the region. Writing and photography always operate on very different planes. Comparing what photographs can (and can’t) do and what writing can (and can’t) do is instructive. The essay is poignant and insightful, and it brings to life the photographs from the preceding section as much as they, in turn, illuminate what otherwise would have been left to the reader’s imagination.

I’m a big fan of photography and writing coming together the way they do here. As much as I enjoy looking at photographs, I love reading. So this is a good book, shedding some light on what now has become merely a faint memory (if even that) for those who were alive in 1988, watching the trickle of news coming in from the still rather hermetically sealed Soviet Union. And it is a reminder that while there is no end to the flurry of wars and disasters that appears to be just flooding us right now, yesterday’s survivors or victims are still tending to their wounds.