Later this week, I’m going to travel to Berlin for work. I will be there for a little over three weeks. As has been the case over the past few years, I won’t have much time for all things online. But the articles for this site are prepared and ready for publication. There will be two, and they’re so long that I cut them up into two pieces each. I’m quite excited about them; in fact, they could have both been even longer. Ultimately, I think I need to find a different form for very long pieces — regardless of what is being said about “long-form” art writing online, a medium that at least to some degree makes us all develop attention-deficit disorder might simply not be the right forum. Onto photobooks…

There was something in the water in the Netherlands in the 1950s (and there still is, albeit in slightly diluted form). Photographers Ed van der Elsken and Johan van der Keuken would publish Love on the Left Bank and Wij zijn 17, respectively. It’s likely you will be familiar with the former, given the book has been — rightly — praised and discussed over the past decade. It’s equally likely you might now know of the important contributions by designer Jurriaan Schrofer, so treat yourself to this biography to find out. Without Schrofer, the history of the Dutch photobook would have simply looked a lot different.

While Schrofer’s contributions still need to be acknowledged a lot more, the same is true for Van der Keuken’s. Much like Love on the Left Bank, Wij zijn 17 is the kind of book that simply should finds it place in the library of anyone who is halfway serious about photobooks. The very good news is that it now can find its way into those libraries, given that it has been reissued in its original form.

In fact, the book simply states that what you are getting is the sixth edition, and that is basically the case. I do own a copy of the fourth printing (there’s no date in the book indicating when that edition was produced), and the differences between what essentially was the original and what is the latest edition are very minor. Crucially, the essay is now available in an English and Japanese translation, the colophon includes a lot more information, and there is a belly band. Other than that, the size was preserved, as was the production (a softcover), and the printing is as close to the original as possible (see top image).

Of course, you don’t want to treat yourself to a copy of Wij zijn 17 because somehow, it’s an important book (which it is), but because it’s a book that is filled with amazing photographs, taken by a very young photographer. The title translates as “we are 17.” The portraits in the book show this then young generation of Dutch people ten years after the end of World War 2, with all the changes that the late 1950s and especially the 1960s would bring just ahead. But if you’re so inclined you can safely ignore that whole background — why wouldn’t you? — and enjoy the pictures.

These days, hardly a day goes by without some young photographer being hyped — our culture has somehow become obsessed with valuing youthful immaturity, as long as it is expressed in what to the rest of us looks like playful youth (watching and seeing all those jeans commercials for decades must have rotten away some of our critical faculties). We should be so lucky to have a Johan van der Keuken, though. What makes Wij zijn 17 so amazing is that the photographs easily bridge the gap that we have come to accept as unbridgeable: the photographs both are artistically incredibly mature, while carrying the lightest, most youthful touch. They’re tender, they’re loving, they’re appreciative of what the world might have to offer, and they’re devoid of cynicism.

If you’ve never heard of Johan van der Keuken’s Les Copains before, you’ll be forgiven. It’s a companion book to Wij zij 17. I admit that when I learned about the original idea, I was very nervous: why would there have to be a book with the uncropped versions of some of the other book’s pictures, with other outtakes added? This sound awfully like those jazz re-releases, where they give you five other versions of some track, three of them possibly aborted or “false starts.”

I needn’t have worried, though, because Van der Keuken’s archive has been in very good hands in terms of the books produced from it: gallerist, designer, and publisher Willem van Zoetendaal. Van Zoetendaal is deeply aware of the photobook’s history and of what it takes to make a good book.

None of the pictures in Les Copains feels like it should have better not seen the light of day. It is a companion book in the very best sense of that word, allowing further insight into both the photographer’s vision and into how he then transformed some of the photographs for inclusion in Wij zijn 17. That’s right, Van der Keuken designed his book. I always tell photographers not to design their own books, given that 95% of all photographers have no idea what good design looks like. Van der Keuken was one of the 5% who knew how to translate his vision into something aesthetically pleasing.

Les Copains doesn’t feel that that different than the other book. What I wrote about Wij zijn 17 easily applies here as well, as far as the photography is concerned. You probably don’t want to get it if you don’t have the original book. If you like that one, for sure you’ll want this one as well. 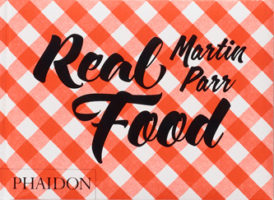 I love everything about Martin Parr‘s Real Food. Everything — except the pictures. I’ve spent a long time thinking about what it is that bothers me so much when I think of most of this photographer’s current work. And I think there are two aspects. First, the pictures are visual snark, and in a day and age where there’s no shortage of snark I’m really tired of that. Snark might have its uses, possibly even its value. But that value isn’t lasting. Snark is for the moment, and it hardly ever survives being critically examined. Second, and that’s not in these pictures but I’m bringing it to them, they’re essentially the easiest and least interesting aspect of Parr’s marvelous early work.

So these pictures don’t tell me anything I don’t already know. They just do it with a bit more disdain than I might muster — if people want to eat that junk, that’s not my problem. But they also aren’t even that interesting, given how many pictures of food we’re bombarded with already. Regardless of whether it’s food photographs on Instagram, photographs used in supermarket flyers, photographs used by restaurants to lure tourists in — those kinds of pictures, if you pay careful attention to them, do what Parr’s do, except they don’t add any snark.

I think that if that’s your territory then you either have to simply take those pictures, literally taking them (think Useful Photography), or you have to bring something else to pictures of food that’s a bit more than a ring flash and gaudy colours. Because you’ll have to make me look at something that I wouldn’t see, even if I paid as much attention as possible.

I’m sure the book is going to sell well because it’s easy. They’ll have it at Urban Outfitters. People will probably look at it once, snicker a little and then put it away, never to revisit it. And I shouldn’t even think about it that much, because nothing indicates it’s intended to do that, make people think. It’s a piece of entertainment, like any of those mass-produced pop songs you might hear on the radio. It might even do photography a favour, because someone might get encouraged to look at other photobooks, and s/he might then discover the good stuff. Nothing wrong with any of that.

Still… It’s not that I don’t like entertainment. I just prefer it a bit smarter. Actually a lot.