And so the mighty photobook machinery churneth out book after book after book. Even I get saturated at times. My current strategy of dealing with the flood (deluge?) of photobooks is to flexible with my engagement. Instead of turning away, possibly like when being hung over — “I’ll never have a drink again!”, I’ll re-engage with books I already own, ignoring what’s coming in for a little while. Now, if you happen to be one of the people who sent me a book while that’s happening: fear not! I do engage with all of them, just not all of the time. So here then are reviews of selected books that somehow made their way into my office over the course of the past weeks. 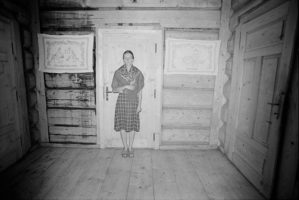 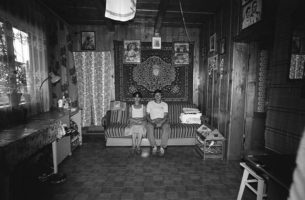 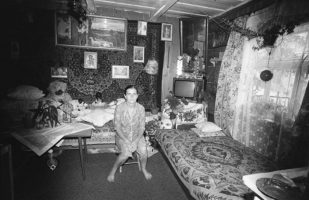 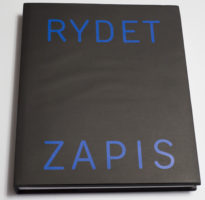 Those who know me, maybe from the classroom, are aware of the fact that I have literally no patience for either the cult of the youth in photography or for the idea that age somehow is correlated with creativity and/or activity. OK, fine, you have your research to show there is some sort of correlation, but I’ll counter your Vox-style argument (which is based on the popular, yet completely flawed idea that you can understand the world by simply gathering measurable facts about it) with “correlation does not imply causation” (which forms one of the bases of all science relying on statistics).

For example, if you want to picked up your camera at age 67 to photograph every household in, let’s say, Poland, then you could just go about it. Chances are you might not succeed in fulfilling that task. After all, there are millions of people living in Poland, and to take a picture in literally every home is a bit like Santa Claus visiting every child for Christmas. You would have more time than Santa Claus, of course, but the numbers are pretty badly stacked against you.

Zofia Rydet did it anyway, producing her Zapis Socjologiczny (Sociological Record). In the photographer’s words, going about this was easy: “I knock on the door, I say ‘hello’ and I shake hands. I enter the home, look around carefully, and I immediately see something beautiful, something unusual, and I compliment it. The owner is pleased that I like it, and then I take the first photograph. Everyone has something in his house that is most precious to him. If I manage to notice this, then this person submits at once. I take advantage of this moment. I ask them to have a seat (this is very often a married couple) in front of the main wall, the most interesting one, the one most decorated with pictures and tapestries, and I take the photograph.” In that interview, you’ll see Rydet wasn’t just interested in every home. She preferred a certain type of home, away from the cities (there’s a marvelous video you want to watch).

I first came across Sociological Record when I went to Poland last year. The website contains a huge number of photographs, but somehow clicking my way through them didn’t feel right. So when I went back to Poland, I looked for a book, which led me to Zapis Socjologiczny 1978-1990, a catalog produced at the occasion of an exhibition last year. Just to get this out of the way, the book has two minor problems (for me): the text is all in Polish, which I can’t read (clearly, that’s my own problem, not the makers’ fault). Plus, the print quality is a bit mixed. But getting such a large set of Rydet’s photographs easily outweighed these drawbacks for me.

The photographs in Zapis follow a few basic patterns. There are pictures of people seated in their homes, photographs that remind me of artists like Chauncey Hare or Bert Teunissen. In addition, the viewer is treated to depictions of the outsides of some of the homes, and there are portraits of elderly women standing in the open front doors of their homes. Rydet’s work derives its strength from its cumulative effect. It’s almost entirely irrelevant whether each and every one of the photographs on its own is a great picture.

Here is an aspect of photography that we possibly need to re-explore, the cult of the gem photo, where a project can only contain very good pictures. As Rydet shows, there are other ways. Maybe the fact that she was not producing work for the heavily commercialized gallery market worked in her favour of opening up her mind to seeing the — pardon the pun — bigger picture more than the individual gem. This is not to say that these photographs aren’t good. They are. Some of them are amazing. They all are poignant in the kind of innocence sense that has a hard time surviving in market dominated environment we now live in.

Zapis Socjologiczny 1978-1990 is not just an immense gift to Poland. It’s also one for the rest of the world, even though outside of Poland, people might treasure the work for different reasons. Or they might be drawn to, as I said, re-thinking the assumptions that underlie their own approach concerning photography. If one thing is clear, there really is no excuse any longer for excluding Zofia Rydet from the history of photography. 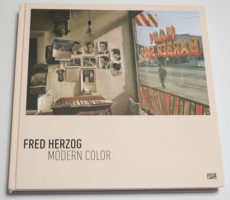 I don’t intend to produce these reviews around themes, but at times, that just happens. So here’s the theme: retrospective. Fred Herzog‘s Modern Color was waiting for me when I came back from Poland with the Zofia Rydet book. Unlike Rydet, Herzog has made it into the history already in those ways that our somewhat hype obsessed culture deals with those things: instead of changing the history, the addition is framed around the newly member’s exclusion, which is then written about gushingly ad infinitum (the most spectacular example of that, of course, is Vivian Maier). At the same time, the new addition is squeezed into the same-old Procrustean bed that has served us so poorly in the first place.

In Herzog’s case, it’s his use of colour (sorry, I prefer the British spelling, because that’s how I learned it in the first place). Not to go into too many details here, but Herzog clearly made incredible use of colour film, creating photographs that are a sheer pleasure to look at. But we have the history of (art) colour photography established. So instead of re-framing everything around Herzog (and, possibly, a few others such as, say, Saul Leiter), he’ll have to fit in with the usual Eggleston-MoMA colour complex. And then some references to the other usual suspects (Walker Evans) are being thrown in for good measure. Make no mistake, I get the idea where this approach is coming from. It has a lot of merits, as David Campany’s essay in the book makes clear.

At the same time, though, sometimes you need to step back from what you have, have a hard look at what is in front of you, and then think about whether disassembling and re-assembling might not be a better approach. That way, those newly added don’t merely become supporting beams of what we all take for granted. If you think about it, this approach actually diminishes the newcomers’ achievements considerably. In addition, the problems with the current add-on approach becomes vastly bigger once we’re dealing with artists outside of the larger context of Western culture, for whom the likes of Walker Evans or William Eggleston often are simply completely useless reference points.

Anyway, I was excited about the idea of Modern Color because I had wanted a larger number of these pictures in my library (I think I have a copy of Fred Herzog: Photographs somewhere, but I can’t find it right now). The good news is that now I do. But there are some bad news. To begin with, even though I usually don’t mind pictures crossing the gutter, when they do I expect the book to lie reasonably flat so I can see everything. That’s not the case here. Right after the essays, Herzog’s famous Man with Bandage loses the arm he’s raising unless you apply considerable force to try to make the book lie flat. If you don’t, he becomes Man with Bandage and Disappearing Right Arm. That’s the kind of very basic problem with book making that simply shouldn’t happen. In addition, the pairings of photographs all are frustratingly simplistic. If on the left page you have, say, a picture of a fence, then you’ll have another picture of a fence on the right. That’s great for Photography 101, to teach students to look at form and content. But it’s really dumbing down photographs in a catalog.

The good, actually very good news is that Modern Color makes available a vast number of brilliant photographs. The comparison is a bit unfair, but it’s unlike William Eggleston’s Democratic Forest reissue, where you got a lot more pictures, but the added insight did not necessarily correlate with the numbers. Here, I was amazed by many of the pictures I hadn’t seen before.

Speaking of Eggleston, at the end of the day both he and Herzog might really be more formalists than anything else. OK, there are the American South and Vancouver, respectively. But I see both photographers too enamoured with the photographic frame’s form than with some larger whole to really buy into the stories created around their work. I don’t see that type of formalism as a weakness. In the hands of the likes of Eggleston and Herzog, it makes for marvelous photography. It is, for me, the essence of their achievements.