There is this idea that self-publishing your photobook is more commendable or cooler or more daring than working with a publisher. I don’t subscribe to that point of view. As far as I am concerned, while there are self-published and published books, and there are self publishers, independent publishers (whatever that might mean), and mainstream publishers, the only thing that matters to me is that there are good photobooks and bad ones. Your idea of which book is good or bad might be different, of course.

But the aspect of self-publishing usually has very little to do with the quality of the resulting book. Actually, the idea of self-publishing appears to be part of a life style more than anything else (much like photography itself has become a life style more than a form of art for some photographers). You get instant credibility with some people if you self-publish. Well, good for you. Time will tell whether that’s worth anything once the current craze around photobook making has subsided a bit.

I needed to get this little preface out of my system simply because occasionally, I will get an email from someone claiming that I don’t review self-published books (which isn’t true), or that I don’t value self-published books as highly as I should. Well, I do. If they’re done well. I’d like to think that I treat all photobooks the same way: I receive the package or envelope in the mail, I open it, I throw whatever mass-produced PR materials come along with it into the recycling bin while keeping material that is addressed personally to me, I remove the shrink wrap (where applicable), I have a quick peek at the book, and then I put it onto my pile of books to look at again and again, and to, at some stage, review (or not).

Some books I spend a lot of time with right away. Those tend to be rare. Most books I come back to regularly – provided they manage to sustain my interest in them. It’s a process not unlike pickling vegetables. It will take time, you have to maintain the whole process regularly, and eventually, you’ll get your finished pickles – the pickles, of course, being not the books themselves, but rather the words I can form around my way of taking them in this way. So here are this week’s. 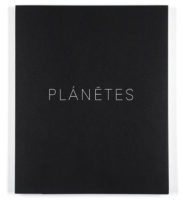 Birgit Krause‘s Plánētes is self-published, and one could take this book as a prime example of what self-publishing can do when it’s done well. Having said that, the book is done with (by?) a place called Raum für Publikation. It’s not entirely obvious to me from their website whether they consider themselves to be a publisher or a workshop helping photographers.

As its name indicates, the book deal with our idea of space and its exploration, an idea that for 99.99% of the population is based on being exposed to pictures or popular-science documentaries (that usually rely heavily on pictures). With the stars (seemingly) being fixed at their positions in the sky, the planets – objects that to the naked eye look like very bright stars – are the odd ones out, given their movements across the night sky.

The word planet is the remnant of this very concept. In the original, longer, form, the Ancient Greeks called them “wandering stars.” They’re all named after Greek/Roman gods/goddesses whose names mostly mean very little to us now, with the exception of Venus and Mars. That they are called planets because they wander across the firmament few people would know. The idea of wandering itself has become strange to us as well. We don’t wander, we hike – everything we do these days needs to have a strict, functional purpose.

What makes Plánētes interesting is that it does not merely contain photographs that look like planets. That would probably be only mildly interesting (keep in mind, though, that I gave up being an astronomer for this, the pickles, so my idea of what’s interesting in astronomy might be very different than yours). Instead, there is a wide range of imagery, all of it clearly connecting our minds to space and its exploration. In addition, there are faint images of the gods that gave the planets their names. Those are easy to miss – the book is subdivided into many section through the use of black pages, some of which have images printed on top, using a very thin layer of varnish.

An initially unassuming book, Plánētes really is the perfect vehicle for this body of work. The edition size is very small (there now is a second edition, equally small), you might want to hurry if you want to get a copy. 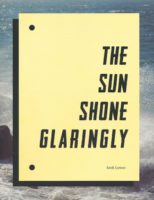 I was going to write something smart about Hollywood, as an intro of sorts, to then talk about Seth Lower‘s The Sun Shone Glaringly

. But earlier today, I read Alex Ross’ wonderful New Yorker piece about Walter Benjamin, Theodor Adorno, and the critique of pop culture, and now I feel a little self-conscious (just as an aside, given how often people quote Walter Benjamin in photoland, you might want to read the piece). So then…

Whatever you want to make of Hollywood, the industry certainly succeeded in creating its own reality, which, to a large extent, has become ours now. Books are being validated if they’re turned into movies, and Hollywood neatly reflects back what we want to think about ourselves, the occasional brushing against the grain notwithstanding. The Sun Shone Glaringly takes Hollywood movies as starting points, to create its own story, combining text and photography.

Ignoring the text while looking through the book is not going to work. The text is too much of an integral part of the whole experience. It would be like watching a movie with the sound turned off. (I will admit, though, that on flights I often do just that – it’s strangely entertaining; at the same time you learn a lot about how movies operate). The photographs show locations in Los Angeles that have been used in a movie. In addition, there are photographs of aspiring actors (I’m assuming the term “aspiring actor” is the Hollywood equivalent of photoland’s “emerging photographer”). The text is a collage of material that’s either taken from movies, it’s anecdotal, or it’s just made up. You’re not being told which one is which, but there is a list of the movies some of the text is based on.

Because the text and the photographs essentially are made to operate the same way – both create a sort of mental image in the viewer’s head, The Sun Shone Glaringly is the kind of book you certainly want to look at if you’re interested in how text and photographs can be made to work with each other. A script of sorts is being created, or maybe more something like a woefully incomplete story board, the incompleteness being the real purpose: this is how the story is being triggered in the viewer’s head. I’m certainly not a movie buff, so whatever obvious references there might be in the book I am certain to miss. But still, even with this background I find the book to be surprisingly engaging. 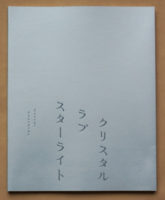 , Crystal Love Starlight by Mayumi Hosokura arrived in the mail. The book is titled after a restaurant of the same name that was shut down in 1992, because the police suspected the owners were providing tables to two prostitutes knowing those would then solicit customers, sharing the proceeds in return. Unless you are able to read Japanese, you wouldn’t know this from looking through the book, at least until the very end, where there is a small piece of text in English (plus, underneath, in Japanese), which links back to the very first picture in the book, a reproduction of a page in a Japanese newspaper that features the original article.

You also wouldn’t necessarily know about this particular story from the remaining photographs, even though clearly something is going on, given that the majority of the photographs either show night scenes, with neon-lit signs being very prominent, or nudes: young women and men. The restrained eroticism of these nudes is very clearly being amplified by the interplay with the night scenes, to the point of the book becoming very sensual.

In particular, given there are nude men and women it’s not quite clear who is playing which role. Thus, the common theme of men as active protagonists and women as the passive, submissive objects of their desire is neatly subverted. Here, the desire is shared; and it elevates the, let’s face it, rather stale and often surprisingly anemic photographic nude to a good position: the nude as a democratic ideal, where the flesh and human desire meet.