It’s sometimes hard to remember that a world of surfaces – the world of photography – can in fact deal with what is underneath. If you see your camera as that tool that registers what is in front of it, then you might as well also think of a pen as that tool that transfers ink onto paper or of a keyboard as that tool that makes those characters appear on a computer screen. But it’s not about the ink or the characters or the pictures – it’s about what they carry.

It’s obvious to see how writing random characters will merely result in gibberish (unless you have an infinity of time, in which case you have a very small chance to produce a Shakespeare play). It’s much less obvious how taking a picture can be just like such a random act as well. To get beyond the random act you have to be able to see well, but you also have to be able to connect with what is presented in front of you, and to see how the photographs you’re making arise not merely from what is in front of the camera, but for the most part from what is behind the camera.

A good case in point is provided by History of the Visit by Daniel Reuter (who – full disclosure – is a graduate of the photography MFA program I’m teaching in). These photographs deal only tangentially with what they’re presenting. There are rocks in the images, trees and some buildings, but it’s not a story of rocks, trees and buildings. It is, in fact, not even that clear what the story is, while it is very clear that there is one. (I’m going to refrain from spelling it out) 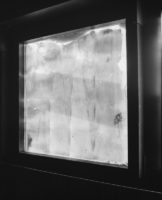 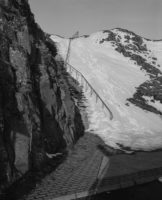 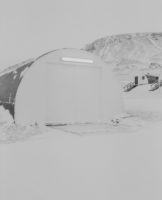 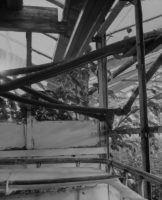 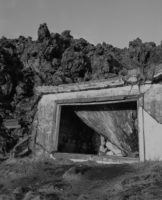 It is quite the irony that the seemingly most descriptive of all media can so successfully obfuscate a narrative, while, at the same time, making it so obvious. There’s always the tempting (and somewhat lazy) comparison with poetry, but photography isn’t poetry, and it doesn’t work like poetry. Photographs attack our visual cortex and then make their ways into our conscious self in ways that poetry can’t: You have to decipher the squiggles first, turn them into words, to then turn those into some mental equivalent, before it’s show time. This is what Francis Bacon spoke of when he said “Some paint comes across directly onto the nervous system and other paint tells you the story in a long diatribe through the brain.” (found here)

Just like that, Reuter’s photographs come across directly onto the nervous system. They transport feeling more than they transport information. They transport an atmosphere, a discontent, a confusion. They do their best to resist descriptive approaches to them. The viewer needs to feel them more than to look at them. If anything, these photographs have much more in common with music than with poetry. But they’re a strange kind of music – unlike music they do not seem to become much more familiar with repeated exposure to them. They are just like the feelings we all have, feeling that are so familiar, yet that feel so relevant and fresh every single day.