I’m tempted to see the photograph above as summing up most the existence of large parts of the so-called developed world on this planet, with Nature carefully integrated and kept in its bounds (in more ways than one), surrounded by our man-made structures, which already are suffering from all kinds of neglect and indifference (ditto). It should really be the other way around. We should be surrounded by Nature, and we should be taking care of things, both what is around us and what was and is being made by us. But this is not to be had. The wheel of progress is turning and turning, and money is to be made (which, inevitably, these days has become: money has to be saved so that those who already have quite a bit of it can squeeze out more).

The fate of our cities provides possibly the largest and most obvious expression of what we are doing these days. The scale of a city is something the human mind can still grasp (as hard as this becomes for the so-called megacities). Beyond that, we’re lost. The ice caps are melting, the oceans are rising, vast parts of the land are polluted or in bad shape – who can take this in? Who can comprehend this? And it all comes back to the cities anyway, because that’s where the strings come together that are being pulled. The cities are the nerve centers from which the signals radiate out and back in.

Cities often seem like entities that will last forever, entities that don’t change, but that’s not the case. Cities do change. They are born, they grow, and they might shrink, or even die. Modernity is old enough to have resulted in some cities undergoing massive changes; and if any city stands for the growth and decline of Western industrial history, it’s Manchester (UK), the birthplace of the industrial revolution. It seems fitting that the photograph above was taken there, by Mario Popham. 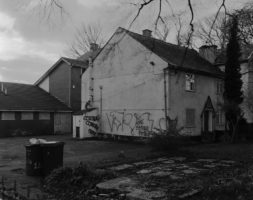 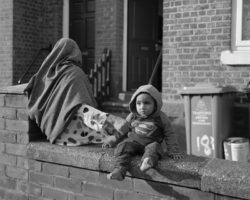 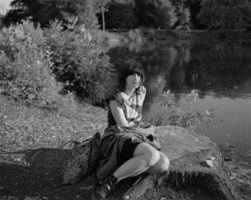 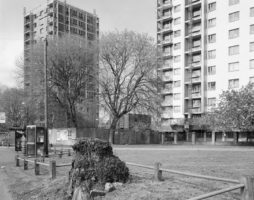 These photos are part of Enduring Growth, Popham’s portrait of the city, in which he has been living for ten years. In his brief statement about the work, the photographer speaks of the struggle between Nature and the man-made environment that I talked about in the very beginning.

On second thought, maybe this whole idea of Us vs. Nature is flawed, though, because, after all, we’re animals ourselves. We might be thinking of ourselves as at least a special kind of animal, but still, as animals we’re part of Nature. As that part of Nature, we’re bound to follow the trajectories of its inhabitants just like every other member, whether we like it or not. The difference between us and the dinosaurs, for example, might end up being not the difference in brain sizes, but that climate change we are going to face has been brought on by ourselves.

This might be taking things a tad too far, it might be making this little essay a bit too loose, a bit too out there. But if we stick with the simple fact that we are the result of Nature, then the struggle that we perceive between Nature and us – that struggle doesn’t exist. Mind you, there is a struggle, but it’s much closer to the elementary struggle to survive that all species living on this planet face. Nature, we could thus extend the argument, might not even be the greatest threat we face. It’s not Nature that’s taking jobs away or cutting benefits. And it’s not Nature that is responsible for the profit-principle. Nature here as in: That which is outside of our human sphere.

It’s our very own nature that is responsible for all these things. Nature might be overtaking plots previously used for what we think of productive ways, but it’s our own nature that made that possible. We build, and we destroy. We build our cities, and then we destroy them – all the while pretending we’re fighting a big struggle against forces outside ourselves. And that part of Nature overtaking what we’re discarding – that might just be Nature telling us: Hey, if you can’t get your act together and take care of yourselves, I’ll take something back and re-use it.