We have reached peak photobook, which right now looks like a rather broad summit. The photobook as a way to use and disseminate photographs has become a widely acknowledged tool, a fact that for me certainly outweighs the various inevitable excesses.

Curiously, while there is a lot of talk about photobooks, I’m not sure someone who does not know a lot already will have an easy time getting some first impressions. Most of the materials I can think of seem to have been made for those in the know, in other words for people who are familiar with photobooks. If you were to pick up, say, The Photobook: A History, Vol. 1 I don’t think you would necessarily understand photobooks per se better (I know I didn’t when I looked at it for the very first time). My own Understanding Photobooks will teach you about how to make a photobook (after all, that’s what it was designed for). But if you are someone who just wants to get a deeper understanding without a lot of technical input it might be a bit much (maybe this would be similar to trying to understand Italian cuisine by reading a cookbook).

So there is need for something simpler, something that covers more basic aspects: what does this type of book actually do? Ideally, the photobook would be looked at from various angles. This is where Photobook Phenomenon enters, a box set of eight booklets that each studies photobooks using one particular angle. It’s authored by Lesley Martin, Markus Schaden, Martin Parr, Horacio Fernandez, Ryuichi Kaneko, Gerry Badger, Erik Kessels, and a few others.

Producing this set is a good idea. It will help someone who is unfamiliar with the world of the photobook look at the various aspects that tend to dominate every photoboook festival (seeing the same topics and usual suspects at every festival at times makes me think of a traveling circus). Consequently, if you’re already in the know, Photobook Phenomenon might be of somewhat limited utility for you. But I think that’s more than OK. As I said above, there already is a lot of material for experts out there.

So what do you actually get in this set? Booklet 1 contains texts by Moritz Neumüller and Lesley Martin, with both authors giving broader introductions. I’m hoping that Martin’s contribution might eventually blossom into something larger, its own book: the idea of a photobook taxonomy provides a very different angle for approaching the topic. What types of books are there, and what do they do?

I’m a bit baffled by booklet 2, a “reading” of William Klein’s Life Is Good & Good For You In New York by Markus Schaden and Frederic Lezmi. It looks cool, with its various phrases attempting to mimic Klein’s hectic book. But unless you are very familiar with that book, looking through this booklet is more like stumbling across a complete stranger’s Twitter feed. Maybe this works a lot better in the exhibition space it was designed for. 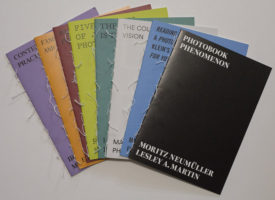 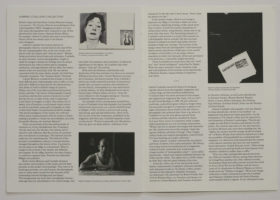 In a sense, Martin Parr and Erik Kessels produced the same booklet, the difference being the angle: hey, look at these “best”/wacky photobooks I collected (theirs are numbers 3 and 7). I think Kessels ultimately does a somewhat more convincing job, because here you understand, OK, these are just really weird books. How or why Parr’s books are the “best” isn’t explained — maybe it’s good for newcomers to realize that parts of the photobook world love a “because I say so” approach.

Horacio Fernandez’s looking at the library as a museum in booklet 4 is one of the highlights of the set, as is Ryuichi Kaneko’s very basic introduction to Japanese photobooks (booklet 5). I feel they manage to reach newcomers as much as those who already know about photobooks. In particular Fernandez’s essay casts a very wide net, and it’s deeply researched.

Of course, with these different writers present, the reader will also end up being drawn to the ones closest to what s/he prefers (as might be the case here — maybe I’m just not cool enough for the Schaden/Lezmi extravaganza).

In booklet 6, Gerry Badger looks at propaganda versus protest books. I have no idea what someone not very familiar with photobooks would make of this contribution. My guess would be that of all of the booklets, this might be the one that’s really made mostly for experts.

Lastly, the booklet entitled Contemporary Practices by Irene de Mendoza and Moritz Neumüller looks at a small number of contemporary books and has their authors talk about them and their practice. I feel this is a great addition to the overall set, because in many discussions of photobooks, this approach tends to be ignored.

There is one more aspect of Photobook Phenomenon that deserves to be mentioned. If you get yourself a copy, it’s not going to break the bank, and once it arrives in the mail, it won’t break your back, either. With the physical sizes and associated prices of many survey books having gone through the roof lately, something aimed at a larger audience ought to simply be more accessible in every aspect.

Especially on the American side of the Atlantic some people would probably prefer a more conventional single-volume book instead of this set. But I’m not sure such a book would have the same impact. This set is so well thought out and designed and produced — it just stands out. It’s engaging. It conveys some of the exciting energy that is driving parts of the photobook world.

An introduction to that world ought to communicate this particular aspect as well: we might disagree about what we like, what to look at, what’s important, what’s good and what’s bad — but the world of the photobook is filled with people who are genuinely excited about what they’re doing.