Last week, I had this idea that the world’s patina manifests itself differently in photographs, depending on where you go. I wasn’t going to write about it, initially thinking it would be too esoteric a topic. But the idea kept popping up in my head, and it had me wonder whether it was in fact correct, or what exactly this might mean.

I should say that I’m using my own pictures here because I’ve come to realize that my idea of patina and how it enters pictures was too simplistic. When I started looking at all these pictures from different locations, they were already more than one step removed from what I had encountered. What I mean by this will hopefully become clear in the following. When you look at them, look at them with the idea of patina in mind.

In a very general sense, (lens-based) photography captures light that is reflected off surfaces (exceptions being light coming from a source, whether it’s the sun, a lamp, or whatever else), so to talk about patina is to talk about photography. But I don’t mean the term in that general a sense.

Even before these gentlemen, there were all those (wealthy Western) photographers who took their cameras to Egypt and other locations in the Middle East. In fact, early Western photographers trekked across the globe to photograph and present foreign places to their own home audiences, and they were drawn by both what interested them, based on where they were from, and what looked good in a picture. 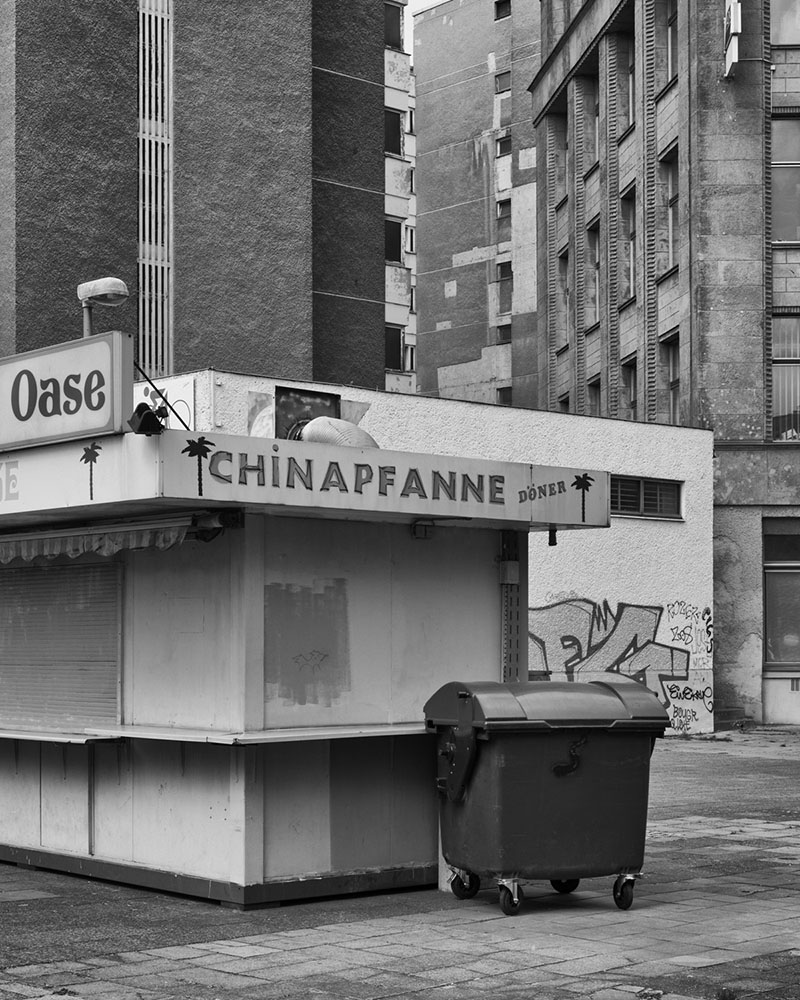 Obviously, it’s incredibly difficult to define what looks good in a picture. So I’m not going to do that. What I will do, is to claim that there are the things that easily look good in a picture, and there are all those other things that don’t, where, in other words, a photographer will have to do some work to make a good picture.

Again, what is a “good picture”? Staying at a purely photographic level, it’s enormously difficult to describe what it is. It’s usually straightforward to see. A good picture often is a picture that’s aesthetically pleasing. The term “aestetically pleasing” is not an objective criterion, though. There might be some objective criteria that can be defined empirically (rules of thirds), but all in all, it’s too loose to be useful (philosophers have written long texts about it…).

But a good picture often succeeds to show us something very forcefully and in a very visceral manner that we maybe would not have preferred to look at, or at the very least that we might not have noticed. That’s a different approach, one not based on the form (or structure) of the picture, but instead on the form and its content and on their subsequent effect on a viewer. I’m liking this route.

Please note that with this approach, pictures that confirm expectations or that show us the world we want to see it are not good pictures. For me, they’re agitprop. But still, your idea of a good picture could be very different than mine. 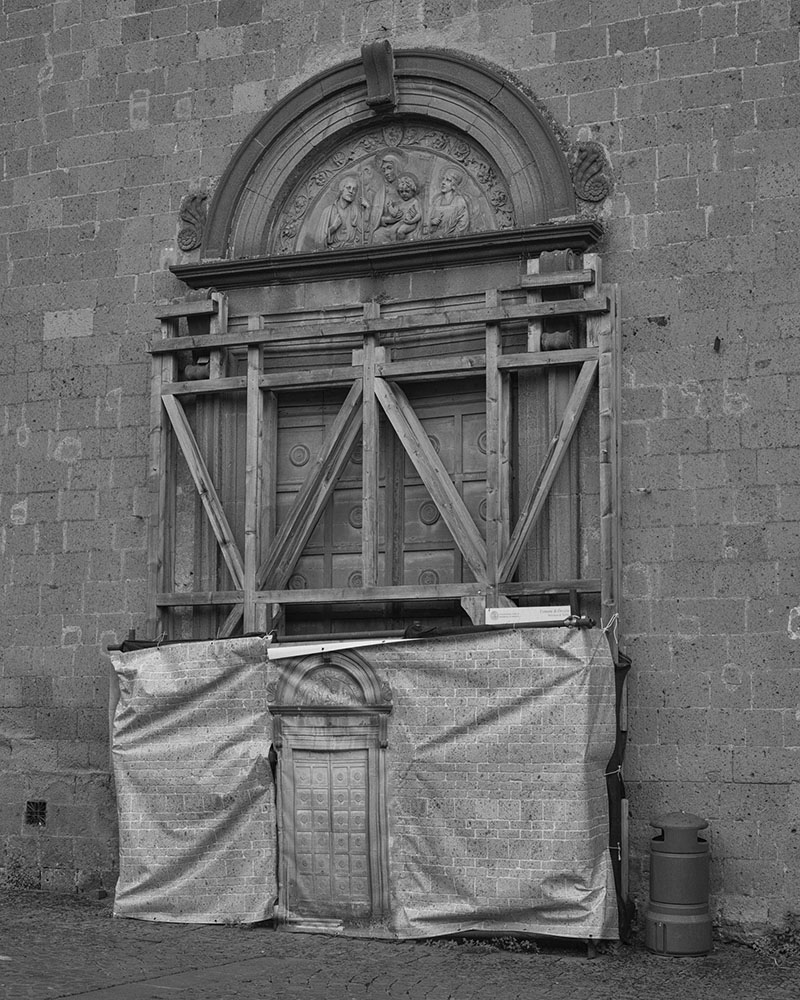 Over the past decade I was teaching photography, and I noticed something time and again, whether from seeing guest artists react to pictures or students making them: photographers are drawn to certain pictures simply because they’re easy to make (for them) and they are compelling in an obvious sense. In other words, when photographers make pictures, they often are driven by their impulses to create pictures that immediately conform to certain expectations (whether their audiences’ or their own — or both).

So the path from the world to what I defined as good pictures is iffy. In general, photographers do not leapfrog across that area where there are all those compelling pictures, to get to the pictures that challenge either themselves or their viewers (or both). It’s actually very, very difficult to do so. Here you are, having spent years on trying to figure out how to take good pictures, and now you shouldn’t take the ones that come easy?

If I hadn’t taken up photographing again roughly five years ago, I probably wouldn’t approach the topic this way. It’s one thing to see something in others. But it’s quite another to experience the lure of the easy picture oneself.

When I started photographing again, I realized that I couldn’t easily take a picture without thinking about what I were to write about it if it wasn’t my picture, but someone else’s. If that sounds tedious to you, I can tell you that, yes, at least initially it was. But I got over that problem, and now I actually enjoy interrogating myself.

Mostly I now ask myself whether a picture challenges me. Not surprisingly, most pictures don’t. I still take them. But when I do, I know that I’m going for something that (for me) is easy to photograph, something that I have a pretty good idea of what it might look like in a picture.

(By the way, I’ve never believed in that Winogrand phrase about photographing to see what something looks like in a picture. That sounds good, but it’s mostly baloney. Very few photographers I know actually do that. I bet if you pressed any photographer long enough they’d admit eventually that that’s not how it works for them. The one thing you could take away from that quote is the following: if you want to become a famous photographer, develop a spiel that you can put into one sentence. Then you’ve hit your jackpot. The spiel doesn’t have to be true, but as long as people believe it you’re good.) 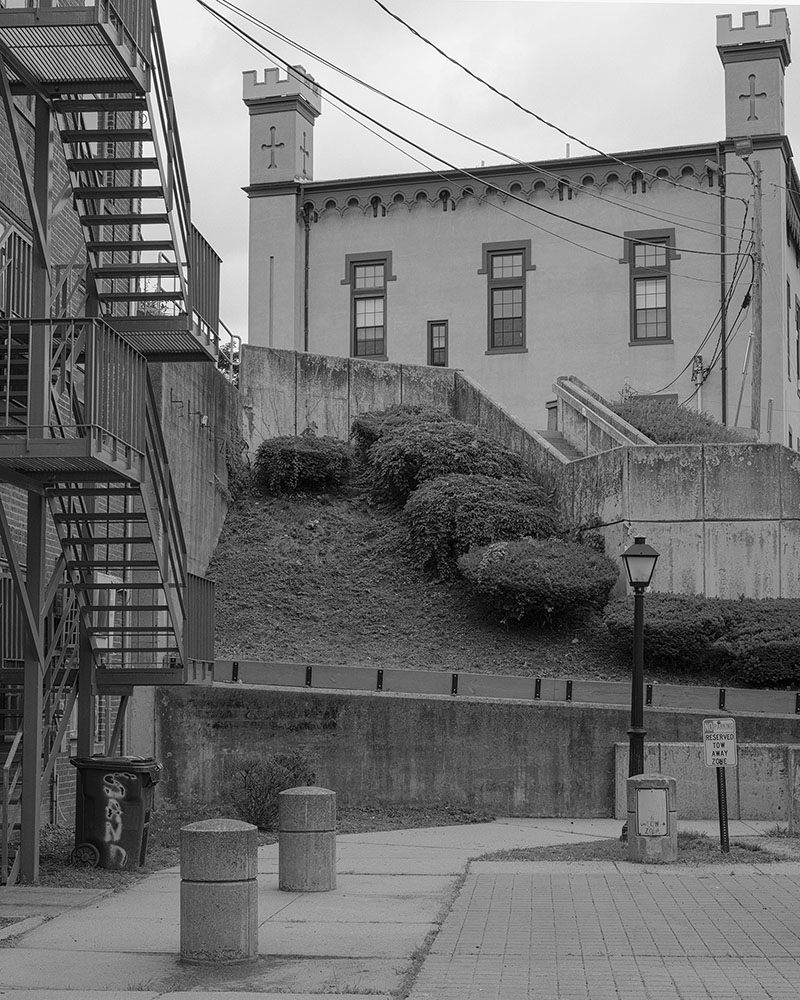 I’m really not all that interested in photographs that I know how to make. It’s an unrealistic expectation to think that one can only take all the other pictures — it’s really hard. But for me, that’s the one thing that attracts me to photography. It is as if I could teach myself something about the world: I have to force myself to look a lot harder to see a picture that I would have missed otherwise. Most of the time, it never arrives.

It’s probably not a coincidence that I got fired up to photograph again when I visited Warsaw (Poland) for the first time in 2016. I somehow had expected something very different than what I encountered. I don’t remember what I expected to find and see, but the country’s patina wasn’t all that different than Germany’s — despite the fact that historically, there’s such a huge divide between those two countries.

Had I gone to Japan instead, I doubt I would have felt the urge to pick up the camera again. At least during my first trip to Tokyo in 2018, the city confounded me because it mostly refused to present me with the kind of patina that I was familiar with. I remember walking around Tokyo wondering how one could possibly take pictures there: there was nothing to photograph.

But that thinking was entirely on me — and not on the city. I was reacting to Tokyo with my Western eyes and expectations. I had done the same in Warsaw. But there, I mostly felt pangs of recognition. In Tokyo, I was unable to find pictures. There was a different visual sensibility on offer, and that sensibility made it hard for me, as someone from a completely different location, to relate.

So when I left Tokyo after my first visit, I was completely confused, to the point of being shaken up. I had brought my camera, but I had had no idea how to use it. It was only when I went again that things changed for me. By that time, I had spent more time looking into Japanese culture. I don’t want to claim that I had learned to see beneath the surface. However, at the very least I had realized that there were pictures to be made, and they would require a lot more work on my part: I needed to look at the city in a different manner. 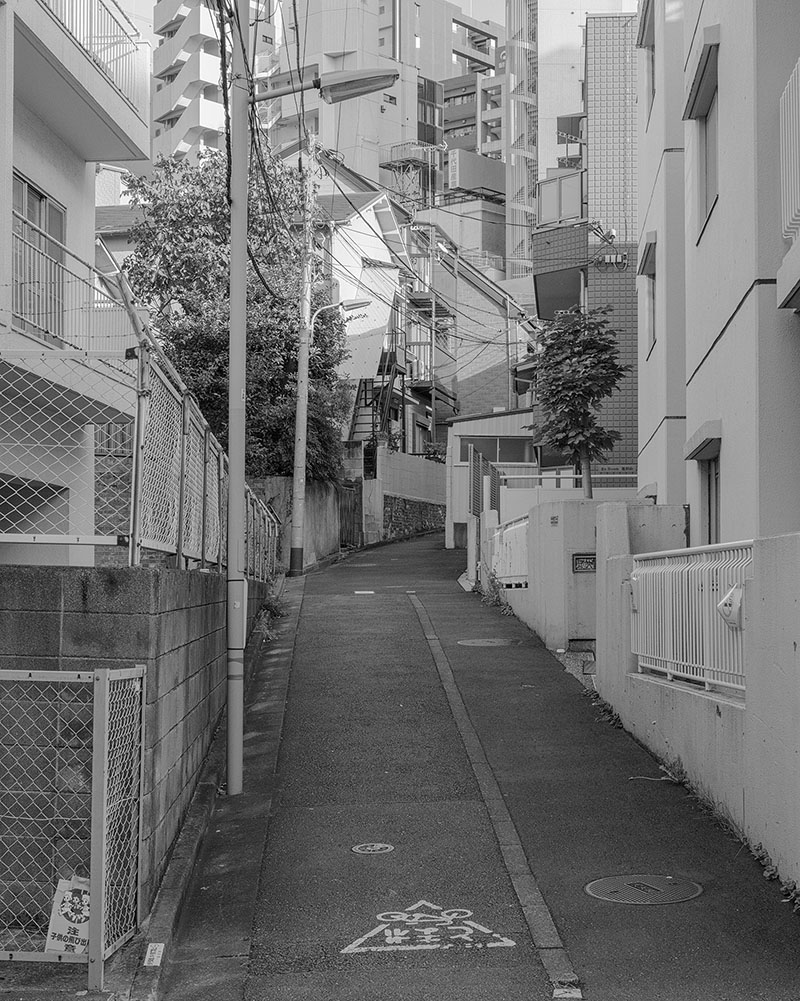 I’ve been thinking about this aspect of photography a lot recently, especially given all the discussions about who should photograph someone or something. Historically, the vast majority of photographs were made by Western-centric male eyes. We have mostly seen the world through those eyes, and this means: we have seen the world not just with Western male eyes, but also with all the expectations, ideas, prejudices, etc. that guided those eyes.

This is not to necessarily say that all of those expectations, ideas, prejudices were bad. Many clearly were, and some were very, very bad. But even in the best cases, it’s a very limited and limiting way to look at the world.

Much like the male gaze has so far been the guiding principle of how we look at men and women (and everything else), the way Westerners look at the world has come to define the world.

As a Westerner, you can’t run away from that. You might have the most sincere intentions and ideas, the utmost integrity, and maybe you’ve donated a lot of money to just the right organizations, but you’re still looking at the world with these Western eyes. So when people point out that we need to see the world with different eyes, that doesn’t necessarily imply an attack on you as a Western photographer. It means that there are other ways to see the world that you simply couldn’t offer.

So to think of the idea of patina as something that is photographic, that exists in the world independently from ourselves — that doesn’t make sense to me any longer. There is a lot of patina in the world, and it can look different from location to location (or maybe two very different locations somehow have the same patina). It’s there because of people’s ideas and actions.

Crucially, a photographer is not some independent automaton who simply picks it up. S/he will pick it up either because it looks good in a picture or because of what s/he learned to see, given her or his background, culture, society… 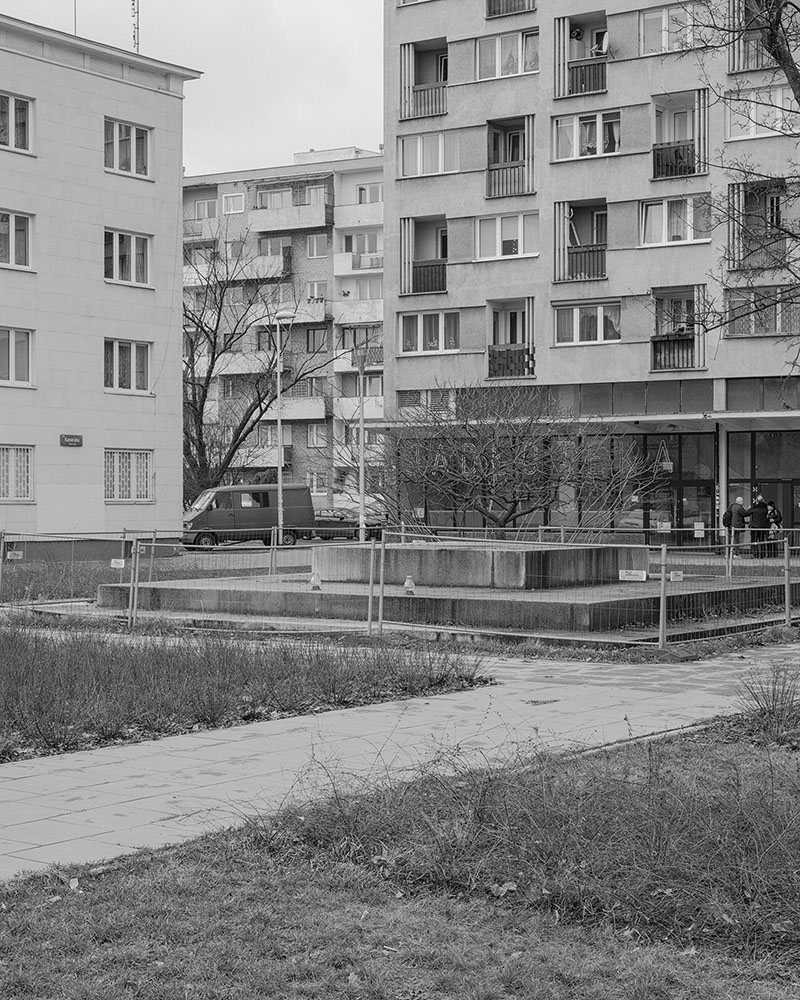 In other words, if I point my camera at something that I feel has a lot of patina, then I’m making a choice that ultimately says more about myself than about the location that I’m photographing.

That approach is not necessarily wrong if — and only if — we manage to transcend just looking at ourselves. Much like a photographer has to force herself or himself to go beyond the easy pictures, as viewers, we have to force ourselves to go beyond the reads that come easy to us.