A preface (of sorts): It has becomes somewhat customary to greet the announcement of a shortlist for an award, or even of its winner(s), with comments about how in one’s (actually not all that) humble opinion, it’s really a shame that XXX was not in fact included and/or the winner. But an award is really just an award. Should someone else have won? Well, no, because the jury picked the winner. If you don’t like that then you probably need to hand out your own award. In much the same fashion, I expect there will be all kinds of arguments about whether or not Martin Parr and Gerry Badger could or should have included that great book by YYY in The Photobook: A History Volume III

. Could – I suppose – yes. Should, well, no. It’s their selection, and however much one might disagree with the inclusion or exclusion of particular books, discussions about that take away from the work Parr and Badger have done. If you don’t like the selection, publish your own.

Let’s face it, with this series of books, Parr and Badger have produced a tremendous contribution to the medium photobook. Anyone even remotely connected to the photobook has already benefited from it, whether it’s publishers or photographers making photobooks (commercial or self-published ones), anyone interested in what the medium has to offer, or educators teaching classes about the history of the photobook (I’m one of them).

Most of the preceding seems a bit obvious. But I really wanted to point it out anyway, in part because there are now so many books about photobooks that it’s almost tempting to wonder what the big deal is with another Parr/Badger. Inevitably, my own reaction to this new book is based on where I’m coming from. I teach classes about photobooks (their history as well as how they function/operate), so every addition to books about photobooks makes my job a little easier. I write about photobooks, so every book that helps me put them into a larger context informs my articles. In various capacities, I am involved in the making of photobooks (either my own or those of students), so every book that show more samples of what people have already done provides more guidelines for or examples of what can be done (or what should be avoided).

In some sort of way, I am a photobook collector. I own enough photobooks to qualify as a collector, even though I don’t necessarily see myself as one. I rarely “hunt” for specific books that I want to own, even though given the chance I will snatch up something I’ve been looking for. But I don’t necessarily need pristine copies for my library – in that sense, I’m more interested in the book as a vehicle for photography, not the book as something of monetary value. Needless to say, the inclusion of a photobook in any of the Parr/Badger books moves them away from being part of my library, given that they become collectors items right away, and we’re talking about real collectors here. People with, you know, money.

There are always some grumblings about the collecting aspect of photobooks. To some extent, I completely understand complaints about collectors ruining it for people who love photobooks, but don’t have the money to spends hundreds or thousands of dollars on a photobook. But then, that’s just part of the whole game. Photobook publishing is a business, and any business comes with its extremes. I personally never get upset about not being able to buy some particular photobook, because I don’t need any photobook badly enough. As much as I love certain books that I don’t own, I’m still perfectly happy with not owning a copy. And I don’t begrudge what collectors do at all: after all, they often – indirectly – subsidize a lot of photobook publishing. Until there will be wide-spread government grants for photobook publishing, collectors will continue to help underwrite photobook publishing. Good for them if they can afford some book that happens to be valuable because of the inclusion in any Parr/Badger book. Good for us that they can spend so much money on photobooks, helping publishers or photographers make books. 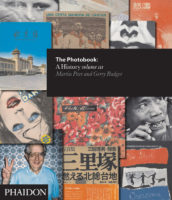 But back to The Photobook: A History Volume III (PB3). In a nutshell, this book covers terrain more deeply that the previous two volumes did not talk about in all that much detail, photobooks published after World War 2, with a particular focus on the contemporary photobook. If you own (and use) the previous two books, you definitely want to add this one to your collection for that reason alone. PB3 completes the set.

Like the previous two volumes, PB3 presents books in different chapters. The chapter topics are somewhat subjective, as is how one would go about interpreting them. This is, I’m happy to argue, a fruitful approach. The chapters cover “Progress Reports” (Propaganda), “Documents of Anger and Sadness” (Protest books), “The Kids are Alright” (“Desire and the Postwar Photobook”), “Monuments to our Moment” (“Modern Life and the Photobook”), “From Here to There” (Place), “Killing Fields” (Conflict photography), “Looking at Ourselves” (Identity), “Momenti Mori” (Memory), “Cannibalizing Photography” (Authorship). Clearly, the topics aren’t mutually exclusive at all. Someone’s protest book might be someone else’s propaganda. But the authors admit as much. They’re aware of the fact that categorizing photobooks is a tough endeavour, and they know that much can be gained from doing it.

In fact, PB3 derives its strength from the fact that its authors clearly know a lot about photobooks, that they’re fairly open as far as their own biases are concerned (occasionally, you need to read between the lines), and that their roles ultimately are closer to that of a critic than of an art historian. Where feathers are being ruffled, where readers might be tempted to disagree, to demand some other book might be included – that’s where PB3 – just like its previous volumes – triggers debate and engagement with the medium. In other words, while there is something to be gained from a pure art-historical approach to photobooks (there is no shortage of books doing that), such an approach also shuts down debate, and it turns engagement with the medium photobook into a rather stale affair. Nobody interested in photobooks can have much of an interest in turning the medium into a mostly tedious affair, and PB3 deftly avoids doing that.

But with its third volume the series appears to have exhausted itself. It’s hard to see what would be gained from a fourth volume in its current form. Unlike some of the other books about photobooks, most of them centering on geography, PB1-3 are rather short on both text about individual books and images of selected spreads. Which is fine if you want to get a broad overview. But anyone thinking about writing a book about photobooks might want to up the ante a bit. Survey books are fine, but how else can photobooks be approached? Isn’t there a lot more we can learn from them, from how they present their photography? If apples are like apples, and oranges and like oranges, what can we learn from comparing apples and oranges? I think this is where these kinds of books mostly can become interesting.

In the meantime, The Photobook: A History, Vol. I, Vol. II

are landmark achievements for the medium photobook. Anyone interested in the photobook, whether as a photographer, publisher, designer, educator, or critic might want to have the full set in their library. They’re an indispensable source of information, offering countless ways to review and approach the certainly most exciting – and often ambitious – way to present photographs.