The less information a portrait gives us, the more we start scrutinizing the image. This photography by Nelli Palomäki, Aino at 27, shows us a young woman in the center of a frame, with all reference points around her hidden from view. Richard Avedon used to place his subjects in front of a nondescript white background. Palomäki here uses a black one. Such seemingly simple decisions have consequences. A black background and a white background register as different kinds of empty. A figure stands out against a white background. But this young woman emerges from the background, with parts of her blending back into it.

Such a discussion might appear to concern itself with semantics, but it is anything but. Instead, we are deep into the territory of the psychology of portraits. Photographic portraiture is mostly concerned with the psychology of the image, the experience of encountering someone else’s likeness in photographic form. Talking about the psychology of images might appear to be a strange idea. But think about, say, the often ludicrously Photoshopped photographs on the covers of magazines and the consequences arising from those, and it becomes very obvious that photographs can have very profound psychological impacts on people.

The results of this woman blending into the background are complex. For a start, there is none of the harshness that often characterized Avedon’s photographs. His sitters who often felt like specimen, mercilessly exposed against a white background, with no chance to hide anything. That lack of harshness here is also caused by decisions other than the choice of background colour. The light looks soft, and it comes mostly from one side (the left). The photograph looks carefully lit, but it feels as if the photographer had allowed for things to appear and disappear, for this woman to be able to blend in a little, to not be so exposed to the camera.

Look a little bit more closely, and you see that everything in this photograph looks as if it had been carefully arranged: The hair, the scarf, the clothes… It’s all very neat. Mind you, this finding doesn’t take anything away from the photograph. It merely hints at how carefully this photograph might have been prepared.

The real focus of the portrait clearly is the face. I will admit that I find my eyes darting back and forth between the woman’s eyes and the small part of skin underneath her scarf. The eyes draw me in, because that’s where we get most of our information, that’s where we look when we see someone’s face. I wasn’t consciously aware of the small patch of skin until I realized I was looking because it is so bright. The black background has us look at the brightest parts of the photograph, and that’s the woman’s skin, illuminated from whatever light source there might be on the left-hand side.

And that’s really all the viewer has, this woman emerging from the back. Unless we know her in person we have absolutely no information about her. Instead, we’ll start rummaging through our brains, applying all the various filters and preferences and prejudices… We interpret and like or dislike and judge a little, in all kinds of ways, approaching the likeness of the woman in many ways as if we were in fact standing in front of her. Without us doing any of this, portraits wouldn’t be interesting at all. They’d be merely pictures of people. But they’re not. They’re not, because we cannot disengage from the human face. 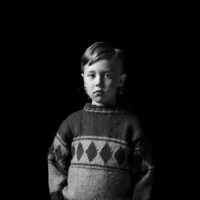 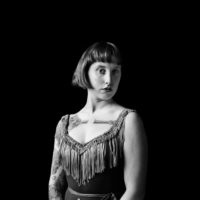 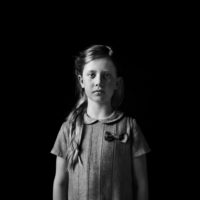 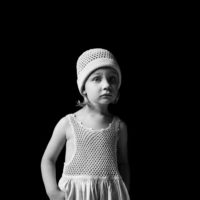 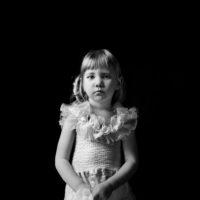 If we now look at more of Palomäki’s portraits against a black background, we get to experience varieties of all of these effects. Yet at the same time we also see how these work for different people, including children. I’s very hard to take good photographs of children, and Palomäki clearly excels at doing it. As always, we have to be careful: We don’t know whether any of these children really are what they appear to be – wise or at least confident beyond their years; but the photographs certainly make for convincing cases.

That’s what good photographs do: They make a convincing case for something. (After all, we want to be seduced.)

All of Palomäki’s subjects are prepared to meet our gaze. We look at them, and it seems they look back, most of them seemingly unruffled (with possibly the exception of Pinja). Of course, it is ridiculous to expect that anyone in a photograph would be ruffled from someone looking at that image years later. But still, that’s not what we feel when we look at photographs. Even though the moment when the picture was taken is long gone, we still feel we are looking at someone right now, in particular if that person is looking at the camera.

Earlier this year, I had the chance to see some of Palomäki’s photographs in person, at a gallery in Berlin. There are no people in the photograph to provide a sense of scale, but you can probably see nevertheless that the photographs in their frames are quite large. Of course, I knew the book very well (see my review here). I had not spent any time wondering about the print sizes. But I remember I walked into the space, saw the big pictures – and was surprised.

Here is where all that talk of the psychology of the photograph inevitably breaks down, because unless you’re standing in front of a photograph hanging on the wall, it doesn’t make too much sense to talk about its impact. Talking about sizes of photographs without seeing them at that size is like talking about the taste of a pudding just based on the recipe (the same is true for photobooks and looking at pdfs on the screen). I can say this, though: I do remember feeling that I wished they were a little bit smaller. I suppose somehow I had had an idea – subconsciously – what the sizes might be, based on looking at the work for a while. And I must have simply projected my ideas onto those pictures, which, after all, are not my photographs.

But that’s what we end up doing: projecting our ideas onto other people’s pictures. This is particularly true if we’re dealing with the likeness of another person. In effect, we engage with portraits almost as if we were engaging with people: We have our opinions and ideas, and we want to be able to apply them.