(This article is the second in a series of two. The first part can be found here.)

Once you move from one photograph to a group, you’re in the dreaded territory of editing and sequencing. Editing and sequencing photographs for a book (or a wall presentation) amounts to making sure that the final group of pictures and the way they are presented most clearly succeed in pointing at whatever it is that is being pointed at, a story, a feeling, an idea… Working on a photobooks often involves approaching it from both ends. There is the original set of pictures, edited in such a way that the selection works most clearly. And there is the overall idea or theme or concept, which is determined by the edit, but which in turn also has repercussions for the edit, by forcing out everything that does not fit.

The overall narrative would then be the way this all comes together to best express the desired end result, regardless of whether it’s a book with a clear story, something more elliptical, a selection of portraits, a catalog, or whatever else. In other words, the best way to approach narrative is by finding out first what the overall idea is and then to determine how to get there. In yet other words, your narrative is a tool that is important for the outcome, but it is not the outcome itself.

The moment you put two photographs together, whether they’re being seen side to side or one after the other, there will be a dialogue between them. That dialogue can be based on either their individual forms, their contents, or on a combination of both. Over the past couple of years, I spent a long time trying to figure out how to best describe this idea of the dialogue: there just are too many possibilities. But if we think about narrative, things might become clearer.

Both pictures will allude to something, however vague or specific that something might be. When seen in combination, those allusions will inevitably get compared. And then in the viewer’s minds there will be connections, or maybe not. As the maker of a photobook, it’s essentially your job to make sure that the right connections are being made. These connections can be very specific, such as when for example a viewer needs to recognize (or made to believe) that the person in the first picture is the mother of the person in the second picture. But the connections can also be quite vague, such as when two pictures taken together evoke a feeling of sadness or dread or joy or whatever else.

Whatever it is, as someone assembling the edit and sequence, you’ll have to understand the repercussions in terms of what these pictures do when presented that way. That’s your narrative. That’s your way of telling that specific story you’re interested in, of conveying that general feeling you want to speak of, or whatever it is you’re after. So while there are many different types of photobooks if we approach them based on the idea of story, approached based on narrative, they all work the same way. There is a narrative underlying the books, regardless of how different the ends these narratives are in support of might be. And a book’s narrative either succeeds (doing what it is intended to do), or it doesn’t (people won’t understand the book). 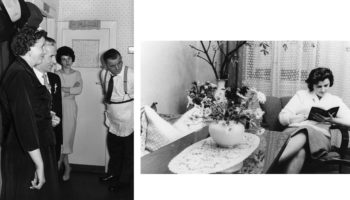 In Figure 2, I linked the photograph from Figure 1 with another one, which I also found (in the same location, but not necessarily on the same day – I don’t remember). In that second picture, a woman is depicted reading a book in what looks like an otherwise deserted living room. What is more, she finds herself at the right edge of the frame, leaving ample space next to her. Of course, now the three people on the left are looking at her, or at least that is what the viewer is made to believe. And these people looking at her trigger all kinds of ideas in a viewer’s head.

The thing with pictures is that once you put two together, a viewer will intend to figure out what’s going. In a photobook, there certainly is an expectation that the way things are being put together makes sense, that it is done for a reason: making a photobook is directorial, and a reasonably attentive viewer should be put into the position where s/he can figure out what’s going on.

So the game that is being played with photobooks works not just because of the pictures and the way they were put together. To a large extent it works because its intended viewers are familiar with or at least have some sort of educated idea of how this works. In other words, you can’t make a photobook without considering your audience (or rather you can, if you’re happy with potentially making some unintelligible nonsense).

In Ingrid Sundberg’s words, “the juxtaposition of images can spark a narrative relationship in the viewer’s mind. […] There is no sequence of events, thus no story.” It’s just two pictures. “However,” she continues, “the viewer begins to create a story by connecting these images in his or her mind, and that story […] will be different for each viewer.” I think this approach to narrative is incredibly helpful. You will – inevitably – get some sort of narrative in your photobook, built by the edit and sequence (and by design and production – showing two pictures right next to each other operates slightly differently than showing them one after the other). So you have to consider your book’s narrative.

Whether or not there is a story, though, is an entirely different matter. If you want a specific story, you’re basically obliged to make sure it materializes. In that case, the use of text can help massively (think Laia Abril’s The Epilogue). In the extreme opposite case, you’d still have a narrative, even if all you’re after is to a general emotion or feeling (or maybe more than one). That emotion or feeling will have to be evoked, with pictures, and to do that you need a narrative.

One final thought. While it’s important to think carefully about narrative, it can be a good idea to consider it first, without even looking at the pictures. But often enough, the pictures determine the narrative, given the overall idea of the project (let’s just assume there’s a project – if there isn’t, the same applies). In other words, the narrative doesn’t necessarily materialize out of thin air. So to understand your narrative, you’ll have to understand what your pictures do – and how they do it. And it always gets back to that, doesn’t it?