We’re all Karl Ove Knausgaard now. Or rather, the Norwegian author has elevated the obsession with our own lives that we appear to have developed at some stage, instigated or enabled by the internet, in particular so-called social media. Knausgaard turned it into a six-volume novel that gives entirely new meaning to the term navel gazing and that, certainly to the surprise of its creator, became a critically acclaimed international bestseller (imagine a cross between the Harry Potter books and the TV show Seinfeld, minus either the magic or the jokes). I read about 85% to 90% of the first book. I did enjoy the somewhat Thomas Bernhardesque beginning. But I really only made it to where I made it since it was the only book I had brought on a trip.

I am tempted to think of the Narrative Clip as the photographic device that promises it will turn us all into Karl Ove Knausgaards. The little device actually does most of the work for us, because all we have to do is to wear it, and it takes a picture every 30 seconds. The resulting set of pictures, produced during whatever period its wearer was using it (you switch it off by covering its lens), is then uploaded to some server, and a piece of software creates a set of moments automatically. No, really, I’m not making this up: you don’t even have to do anything other than go about your business – as I’m doing now. As long as you wear your little clip and let the software do its magic, you will learn about the day’s moments because some software informs you about them. If that is not amazing in all kinds of ways, I don’t know any longer.

If I sound just a tad too excited about this idea, especially to those who have been reading my writing over the past few years, it is because I am perfectly aware of the absurdity of this whole idea, namely that you can “lifelog,” that you can be given, in the device’s makers’ words, “a searchable and shareable photographic memory.” That’s nuts. After all, memory works based on the principle of forgetting. While it certainly doesn’t feel great not to remember something, the clue to one’s memory is not what one has forgotten. It is what is being remembered. You might have forgotten about a few things you would really have loved to remember. But you have also forgotten a vast, vast number of things that, in retrospect, you’re probably quite happy you don’t remember.

Unless, of course, you’re Karl Ove Knausgaard: you write all that stuff down into a few thousand pages, and you’re lucky enough that somehow you’re onto something.

But even if you think your life is so incredibly relevant that you need to remember a picture of what was in front of you every 30 seconds, the idea itself is just nuts. It takes our whole obsession with and faith concerning technology, our ideas about what photographs can do, and it pushes them to their extreme.

Obviously, I just needed to take this all at face value. I’m using the word “obviously” for a reason. We live in a day and age where irony or sarcasm have become part of a life style. As a consequence, whatever power they might have had is largely lost. At the same time, criticism is in crisis, a crisis from which it might – or might not – recover. If criticism is in crisis, and if irony is for hipsters, then the only (or at least one of the most productive) ways out might be to take whatever is being promised at face value, to push it to its logical conclusion.

So here is my experiment: if I wear the Narrative Clip for a few days, going about my business as usual (which involves a rather large amount of time doing things that are not at all very interesting at all, regardless of whether or not they result in something that actually is), what does the device tell me about, well, my life?

I need to add the following, of course. Given that large parts of the public have become increasingly concerned about having their photograph taken without their consent, I’m restricted my use of the device to situations that did not involve other people. I know in the US it is not illegal to take photographs in public spaces; but there is the ethics of assuming consent.

My fancy is particularly tickled by the fact that by construction, the Clip’s software will pick something for me even out of a day like the one I used to start writing this piece. I did spend a fair amount of time sitting in front of my computer, typing and typing and clicking on links. It’s very unlikely this day will remain memorable for me in any way other than perhaps as the day when I started writing this piece. But now I have pictures associated with it.

Having uploaded my pictures… That’s right, you need to upload them to some server, on which the software operates (the idea of giving away your privacy this way is completely mind boggling: the things I do for my craft!). Having uploaded my pictures, the software starts working what you might consider to be its magic, to finally inform me “Done! 1 moment was built. You can now relive it in the Narrative Smartphone App.” (While you can have the software save copies of all the pictures on your hard drive, the results can – so far – only be accessed via an app.) 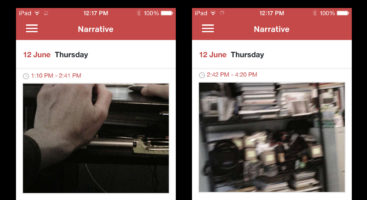 You can tap on any of the pictures in your Timeline, to open up a more detailed view. For the “1:10pm – 2:41pm” case, there are 48 photos to be looked at. If you tell the software to include “lower quality photos,” there are 141 of them. Comparing the pictures in the app with the raw images stored on my computer, I can see the software cropped and possibly rotated them a little bit. The “lower quality photos” often are blurry or very grainy.

I can also tell that even though I wore the device attached to my shirt, I didn’t quite get the angle right. But then that’s the photographer/critic in me talking. In my timeline, I am getting a rather large number of photographs showing my keyboard, the bottom of my computer screen, plus my hands. I think of myself as a writer, and I think of what’s on the screen. In the pictures, my moments now reflect that by showing my hands and keyboards – the tools of my trade. Needless to say, that’s just an interpretation, trying to deal with what I have. That’s what we do with pictures, after all: we adjust our thinking to make them guide our thinking, our remembering.

Judging from all of these photographs – I wore the device for a few more days – my days are quite monotonous (once, I even placed the device in front of me, “looking” at me). I now have photographic evidence that I do spent a lot of time at the computer, doing all kinds of things, mostly writing or clicking on stuff. As it turns out, gaining insight into what I knew already hasn’t really expanded how I think about my life one bit.

Now you could just accuse me of being cynical or too critical or whatever else, and as always you’d have a good point. But then, what exactly do we attempt to learn from thinking we need to photographically record our lives? In some way, the Narrative Clip takes part of the impetus behind Instagram to its logical extreme. Instead of us making the decision what part of life we want to photograph and share, hundreds or thousands or however more photographs are being stored for us. If we find and/or take the time to go through all of those images, we can select noteworthy ones and share them.

The three days I used the Clip resulted in a grand total of 1,284 photographs, covering roughly ten and a half hours of my life as a writer. What exactly am I going to do with this?

As far as I can tell, there are two issues here. First, do our lives really need to be recorded in this fashion? I suppose everybody will have to come to their own conclusion about this. And second, if someone thinks there is something to be gained from this recording, going through the mass of photographs that gets assembled takes up quite a bit of time itself. The camera produces a lot of junk, pictures that while properly lit and not blurry still are useless.

Needless to say, this is where the similarities between Karl Ove Knausgaard and what one can do with the Narrative Clip end. Knausgaard’s novels are the product of the author sitting down and working on them. While they are made to look autobiographical, examining many seemingly unimportant  moments in the author’s life, in fact they are anything but. They are carefully selected and produced and distilled. One could, conceivably, use the Narrative Clip in the same way – but that work would have to go way, way beyond what the little device has to offer. Maybe some day, someone will go about that.

In the meantime, I’m quite happy with forgetting.