Photography’s ultimate cruelty is that you cannot take a picture without involving an act of selfishness, however miniscule it might end up being. Portraiture, the depiction of another person, makes this overabundantly clear. You point your camera at another person, with or without their consent, and you want something: A picture. There is a lot of talk about how portraiture works, and I have contributed to that at various times. However, the aspect of selfishness is usually being swept underneath the table. What photographer, after all, trying to sell her or his work to an audience desired to be fawning afterwards, has the honesty to say “I don’t want to take someone’s picture, I want to take my picture of that other person”? You don’t hear this very much. Instead, there is a lot of talk of a collaboration, of the model giving, and the photographer taking (this is as far as people will go). And possibly, there is some collaboration going on. But who cares? What makes a good portrait a good portrait is not the amount of collaboration, it is a photographer’s willingness to take what s/he wants. If that sounds too Nietzsche to you, then, well, maybe you don’t want to take portraits.

Of course, it’s easier to be selfish when there’s nothing at stake, when, say, you’re prowling the streets of some big city looking for people to photograph without their consent. OK, great. It’s much, much harder to be selfish when working with someone after having gained consent. This involves asking (and, possibly, rejection). It gets hardest when there’s more at stake than just a good picture – let’s face it, even the greatest photographs are just photographs, really not more, but also most certainly not less.

This is part of the reason why family photography is so hard, and why the vast majority of if never gets beyond producing photographic Hallmark-Card moments: You have to seriously consider being an asshole, at least every once in a while, to get your picture (maybe you’re lucky, and your family shuns calling out selfish acts using expletives). This does not mean that to photograph your family you have to be an asshole per se; what it does mean, however, is that for you to do this type of photography very successfully (and this means in such a way that the results will have artistic merit) you have to be perfectly fine with occasionally acting in a way that might make your loved one(s) use expletives either when you’re doing it, or when they see the results.

While selfishness really is an important part of portraiture, to focus on it too much, or to judge the results involving the (perceived) amount of selfishness, is a mistake, though. Because whatever amount of selfishness was required is only a means to an end. Even the word selfishness is a dangerous word, given that it can (and thus will) be misunderstood – or misinterpreted – in so many ways. But photography is a selfish act, and we might as well be honest about it. Actually, any expression of a creative urge involves an act of selfishness, the setting of a boundary between you and the rest of the world: Here, this is me, and I’m going to show you something that I created and that is going to be as unique as I am.

Seen that way, it’s easy to see why portraiture would seem like such an odd area to talk about selfishness. After all, if one wants to photograph another person, isn’t that all about that other person? About, possibly, that person’s essence, personality, or whatever else? It isn’t. Ignoring the fact that photographs are unable to reveal a person’s personality in ways that go beyond what, well, cartoons show, what makes portraiture – and especially looking at its very best practitioners – so exciting, is to see how someone shaped a picture out of another person, using nothing more than a camera. The other day, I met a person I thought I knew from one of my student’s portraits, and I didn’t recognize him at first. How could this be? How can this possibly function, given there’s a camera, a technical device that we think of as faithfully representing what is in front of it? 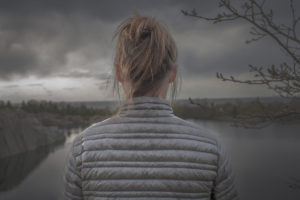 I don’t think there is a simple answer for any of these questions. This is exactly why the photographs are so compelling. In other words, Swarts’ selfishness has paid off. As a matter of fact, the picture at the very top obviously does not look like a straight photograph, and it isn’t. It’s a scan of a photograph emerging from a broken printer. Machines, of course, cannot be selfish (machines are always only stupid). But people using photographs coming out of broken machines can be.

And Beth, the project, shows how this all comes together, albeit in ways that have the process remain a mystery. That’s the other frustrating thing about portraiture: You will never learn it from other people, only from doing it yourself – however much was, is and will be written about it. These pictures show the same woman in a variety of ways that almost make it seem we’re looking at more than one person. Almost.

It is that “almost” that is crucial here, because in that “almost” lies the fact that while photography cannot literally depict someone’s inner state, it can still make a stab at it. Or rather: A photographer can make a stab at showing us her or (in this case) his idea of that other person’s inner state, which he has no direct access to, either (this is what makes life exciting – life on Vulcan must be perfectly boring).

In the end, what we are looking at then is not clear. All that added uncertainty is what defines photography. This is why machines will never be able to produce real art (the relentless hype by today’s tech fetishists notwithstanding): Machines don’t do uncertainty.