Britain’s recent decision to turn its back on Europe — “Brexit” in its official parlance — is mostly an English affair, much like British politics itself. For most outside observers, this decision is utterly baffling and essentially self-defeating. That it was passed with a relatively small majority doesn’t matter much, though. A majority is a majority, and it’s not as if Englad had been known for its enthusiasm towards the rest of Europe anyway. So they might as well leave.

In a larger sense, and this is related to the preceding, the English navel might be the most gazed at in the world. As someone who grew up in post World War 2 Germany, I have always found any country’s patriotism (let alone nationalism) somewhat unhealthy. But England’s always struck me as particularly odd. Of all the countries I’ve visited, it’s the one most firmly and oddly stuck in some form of idealized past that is strikingly at odds with both its own reality and the world at large.

Many other countries share some of the customs that can be found in England. But in all other countries I know an embrace of the crusty and somewhat absurd old is balanced by a usually even stronger embrace of something new, something that might in fact challenge the old. Consequently, in those other countries the struggle inevitably will be over the clash between the old and the new, a process that can be quite ugly and unnerving. England is the only country I know where that clash happens with a mindset so firmly stuck in a idealized version of the past that outsiders mostly end up being baffled about what’s going on. Just look at how “Brexit” is discussed there and in the rest of Europe: it is as if there are two completely distinct realities meeting.

The world of photography offers plenty of examples of the English people’s preoccupation with themselves. Most famously, Martin Parr has made a whole career out of it. But of course there are plenty of other artists. This includes Simon Roberts who has extensively photographed the small island he lives on and who has published a series of book, of which Merrie Albion is but the latest (also see We English or Pierdom). 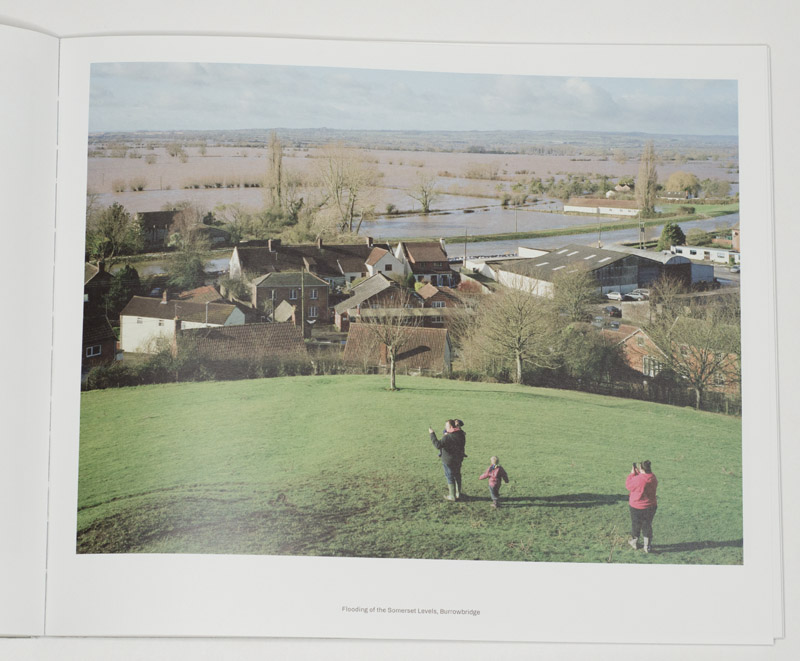 In its photographic approach, the work relates to John Davies just as much as to the more recent Andreas Gursky (the one before all the digital mumbo jumbo) and Joachim Brohm: the viewer gets to see scenes from across the land from an often (but not always) elevated vantage point, with a view camera offering a plethora of details. Photo geekery aside, this approach tips its hat to classical paintings in which the view over the land and the scene unfolding in its vastness came to stand for a god-like, somewhat disinterested stance: these people here get shot to pieces and suffer a rather miserable death, but in the larger scheme of things…

But we don’t live in a world any longer where such a larger scheme of things holds much sway. A few years ago, we all, each one of us (at least those contributing something online), became TIME magazine‘s person of the year (the only “award” this writer has ever “won”), and that’s where we’re at now — while corporations plunder the land and ourselves, including the very data we happily send them so we can “poke” each other on their sites. This change in focus means that the elevated view now merely serves to show the spectacle of public life.

In Merrie Albion, the one photo that might forcefully illustrate this approach is the photograph of Gordon Brown, the former (hapless) prime minister, campaigning in a location identified as Rochdale. There’s a single TV camera trained on the man, who was as bad running his mouth as the country, which would contribute to help him lose the election (obviously, that’s not in the picture); and the whole scene looks like the lot of nothing that politics has become. I suppose for reasons of political fairness, various other politicians are also depicted campaigning in the book. It’s not clear to me what is being gained by that other than an attempt to be politically fair. I will say that I did enjoy seeing a picture of Captain Beany from the New Millennium Bean Party included. 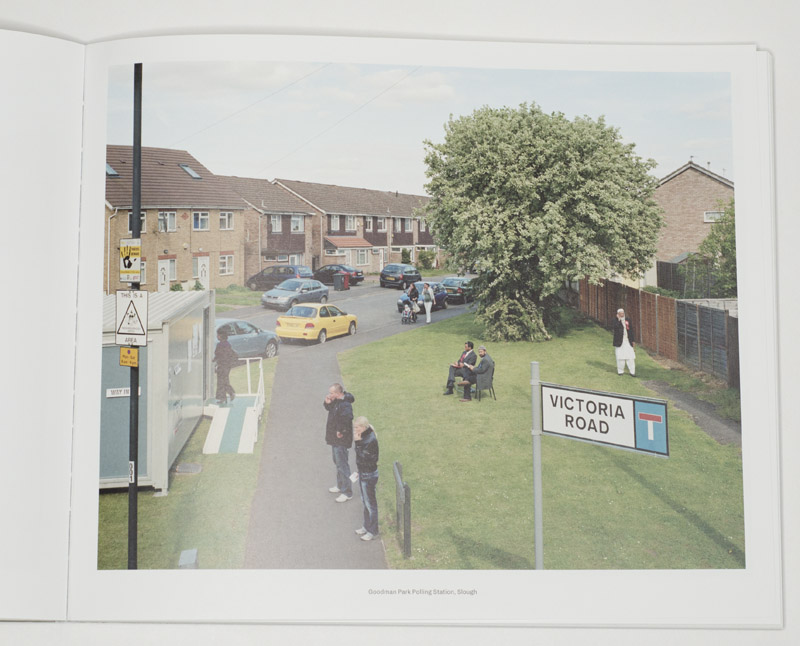 The pulling back of the curtain that is implied by Roberts’ photographic approach has the altogether effect of making the place, mostly England, look even more miniscule than it already is (and I mean that mostly in a metaphorical sense). There’s a provincial quaintness over vast parts of the scenery that in other countries would be openly admitted. Not here, though. That quaintness makes the few more grandiose buildings either look like they’re out of a theme park (for example the parliament) or out of an amusement park (London’s Olympic stadium, say). And near the very end of this all, the burned out hull of Grenfell Tower looms over a section of what looks like the projects nearby (I suppose the British term for this would be council estate).

So what’s all this then? I think it’s obvious that someone not from England would look at Merrie Albion in a very different way than a native. Where we all could agree is that Roberts uses his tool competently and with care, resulting in many very good photographs. Whatever you want to think about either the state of the country or its politics, though, I end up being drawn to the conclusion that the all-inclusive approach (the often detached observations) somehow doesn’t quite cut to the chase. Or rather, it makes for a curiously disinterested take on a place that invites a lot more judgment.

It’s possible that people from England might find judgment in the pictures. I could maybe see it here or there. But I personally would want more. Why judgement, though, you might ask? Well, if you don’t like that word, then use “opinion” or any other word — anything really that will get you quite a bit closer to the actual state of the place’s politics and to the position it is now finding itself in after a referendum led by a small cabal of xeonophobic knownothings (one of whom is currently the foreign minister) landed the country in a political and cultural isolation that will cost it dearly for decades to come. 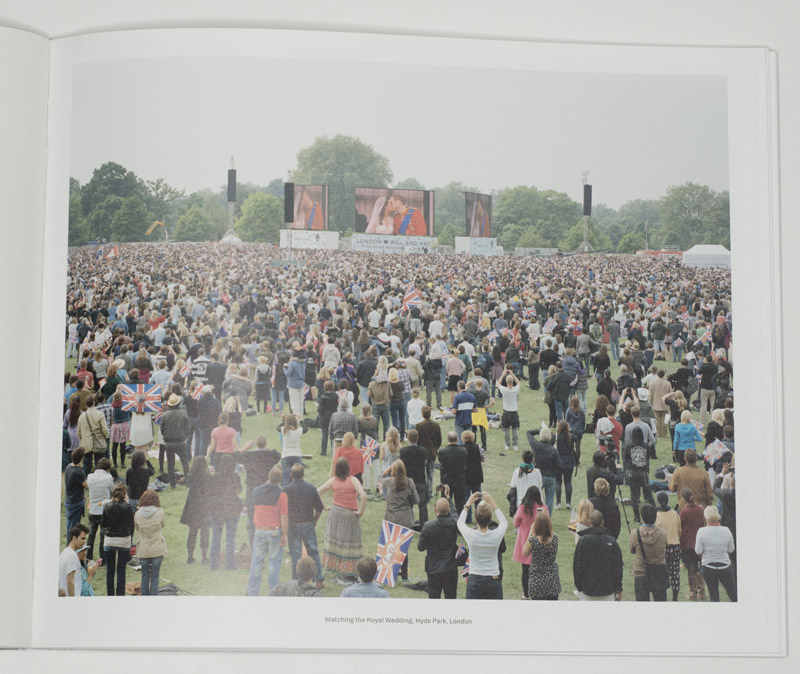 If the only people willing to openly and loudly state their preferences are the populist rabble one shouldn’t be surprised about finding yourself in a mess. And to dig yourself out of the mess, you’ll have to be willing to state what you believe in, you’ll have to be willing to offer an alternative to what historically is already known as splendid isolation (in a world moving rapidly towards its opposite pole). It’s up to photographers to decide whether they want to do that or not. Still, I believe that when you’re a photographer, you’re not only that. You’re also a citizen, a member of any number of larger communities, whether they’re familial, cultural, societal, or geographical. Consequently, you will have to fight for what you believe in — or risk getting swept away along with all the other passive people.

Ideas must be fought with other ideas. Bad ideas must be fought with good ideas. While photographs of course are documentations of what existed in front of some camera, they can be a lot more, especially when grouped into a book: they can be propositions for a better future. So as much as I enjoy many of the photographs in Merrie Albion, I just wish its overall message had a lot more bite. Give me something to chew on! If that means getting down from the elevated ladder, to rumble in the trenches, then so be it.