It might be time to state the obvious: It is very, very unlikely that photography will save the world, in whatever way or form. That’s just not going to happen. Photographs possess power, some more so than others, but to attach too much to them is a foolish endeavour. You essentially end up kicking the can down the road, to have it potentially lie right in front of the photographer, whom you can then accuse of all kinds of things.

This is not to say that photographers can or should go about their business mindlessly, in a state of being naively oblivious of both their medium’s history and history in general. But it seems to me that all too often we blame photographers for our larger collective failures, such as the failure to address specific issues or to come to terms with our own past. In other words, we mustn’t expect a photographer to be mindful of the past, while essentially refusing to do the same thing (the lip service we pay notwithstanding).

Over the past week, I’ve been spending a lot of time thinking about photography’s engagement with the world, and about the various problems that can arise from it. Photography is a unique medium, in that it can take selected moments from the world and freeze them forever. We are often led to think all kinds of things that upon closer examination have very little to do with what is in the pictures.

Given we have become aware of the many problems our societies have been and are still struggling with, photography has lost its initial innocence (and that’s a good thing). You can stay clear of many of the problems by, say,  photographing your family (as many photographers do), or you photograph around the medium itself, creating work that loses all meaning outside of the context of art itself (ditto). But the moment you go out into the world, possibly the much larger world, things aren’t that easy any longer. 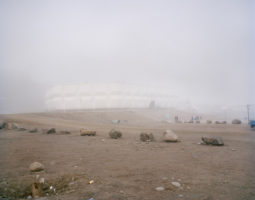 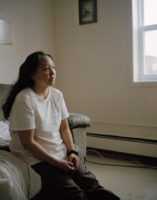 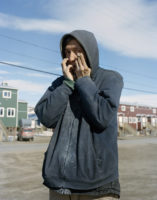 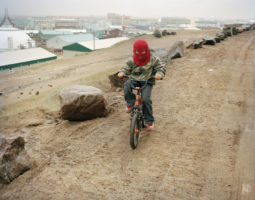 For A Woman With Two Names, Vittoria Mentasti has been traveling to Iqaluit, “the territorial capital and the largest community of the Canadian territory of Nunavut“(source), to photograph the Inuit community there. (It’s one of those strange coincidences I have become used to by now that the book I’m currently reading, William Vollmann’s The Atlas, also features parts involving communities in the Canadian territories.) In a sense, the story is not that dissimilar from the one experienced by other native peoples all over the world, with present efforts to undo the sins committed in the past often being, well, too little, too late.

The key here is to realize that what wants to reveal itself will do that, provided we are willing to look carefully enough. In her statement, Mentasti writes that she was “looking to depict the sense of isolation,” and it’s hard to miss this here. But there is a lot more, especially once you look at the larger selection of photographs. There appears to be a pervasive atmosphere of sadness and loneliness in these photographs. It is as if all these people found themselves dropped into a strange world, which, in a sense, they were.

So much was taken, so much was undone or destroyed, to never come back.