On Friday, 11 March 2011, a very powerful earthquake off the coast of Japan caused a massive tsunami, which resulted in widespread destruction and the largest nuclear disaster since the 1986 meltdown in Chernobyl. According to a 2015 report, almost 16,000 people were killed, with a little over 2,500 still missing, and over 200,000 people having lost their homes, either temporarily or permanently. Among those who lost their lives were the parents of photographer Mayumi Suzuki, who had owned a small photography business in the town of Onagawa. The house Suzuki had been born in, the house out of which her father operated his studio, was destroyed completely.

Ever since, Suzuki has been visiting what is left of her old home town, to witness its reemergence, and to document her generation’s rebuilding. Onagawa had been hit by tsunamis before, and yet again, it is up to its survivors to rebuild.

Of course, photography has played a crucial role in dealing with the tsunami, to the point of it already becoming a major exhibition. Much of that work has centered on the immediate consequences, on apocalyptic landscapes and on survivors. There also has been a focus on the many photographs found after the tsunami. 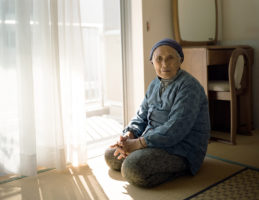 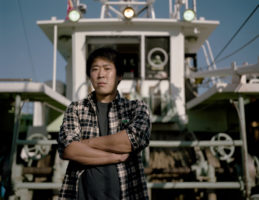 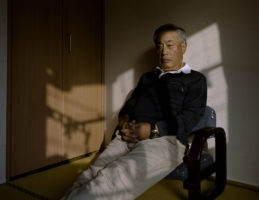 In contrast, Suzuki’s photography really is about the future, about showing people preparing for what they hope is a better future for their children, rebuilding homes and businesses out of ruins. 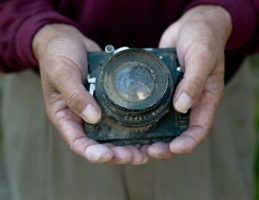 There is, however, another aspect. In the ruins of her father’s photography shop, Suzuki found his darkroom equipment, including a view-camera lens that somehow had survived the tsunami, albeit in somewhat bad shape. The photographer decided to use this lens, previously owned and used by her father, without cleaning it. For these pictures, Suzuki decided, she was going to use b/w film — the rest of the work is in colour.

After years and years of people using so-called toy cameras, we’re fairly accustomed to seeing blurry photographs. But the photographs Suzuki made with her father’s old lens transcend what in the wake of apps such as Instagram we now have come to think of as “filters.” These photographs convey a sense of menace, of unease and dread. They’re haunting photographs. I am a little bit reminded of Thomas Ruff‘s night-time images, which are equally foreboding. 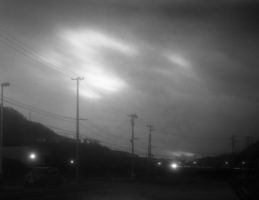 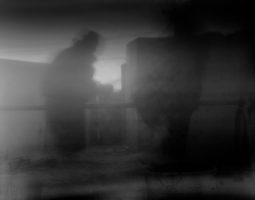 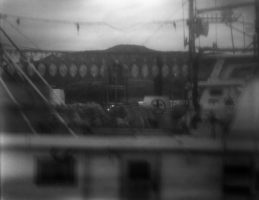 There have been and always will be discussions centering on what photographs can do, or possibly should do. I’m a bit of a minimalist, knowing full well of both the medium’s and our own mental restrictions, a combination that has so far successfully conspired to prevent us from learning lessons offered to us through pictures. What is more, I’m also more interested in the act of photography not as that activity that happens to get to the pictures, but rather as one of the essential aspects of the medium itself. Much like when we whistle in the shower it’s not so much about the music per se as about the expression of a feeling, it is the gestures of photography that contribute much to whatever pictures do.

To record pictures through a blurry lens left over from a perished loved one’s business is such a powerful gesture. It speaks of a deep mourning, and a desire to connect with what is being rebuilt in part through the eyes of those who cannot see any longer. And to have everything focus on the future then is an attempt to defeat photography: to make photos if not of the future, but for the future, photographs that attempt to speak of what was as much as of what is and will be, photographs that don’t merely look back. This is, after all, what it means to mourn, where the final stage means acceptance and looking forward (while never forgetting what was).

(full disclosure: In 2014/15, I worked with Mayumi Suzuki as part of the Onward mentorship program)