Leave it to Gábor Arion Kudász to photograph the relevance of the humble brick and make it interesting. After all, how or why should anyone care about bricks? Conceptually, though, this object isn’t only one of the oldest and most important human artifacts, it specifically has ties to both the human scale itself and to the homes many people live in. Those considerations would have less inventive artists produce a dreadfully tedious and boring project. But the Hungarian photographer is sufficiently steeped in a humanistic tradition to be fully aware of this pitfall and to circumvent it by considering the truly human aspect: bricks are still produced involving a lot of hard manual labour, and everybody has aspirations of having or possibly owning their own home.

I have been following this project ever since Kudász showed me the first pictures while I was on a visit to Budapest. Later, he was one of the winners of the Portfolio Competition that was run on this site for a decade. To find out more about the artist’s background, thinking, and project there’s an interview I did with him in early 2017. And now, there’s Human, the book, that’s a bit harder to locate online than it should be (at the time of this writing, there appear to be copies available here, here, and possibly here — you might have to email the latter; please don’t email me, I only know Google search results).

You could take Human as a perfect example of how to give a project its right and proper shape in the form of a book. It uses all the bells and whistles available without ever going overboard. My only minor complaint would be the artist’s insistence in mimicking the printing in old technical manuals — I don’t think this fully supports the work (and if you’re unfamiliar with such manuals, you won’t pick up on it). But that’s really just a minor gripe. Everything else is simply stunningly beautiful. 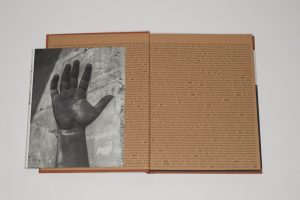 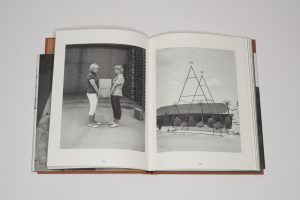 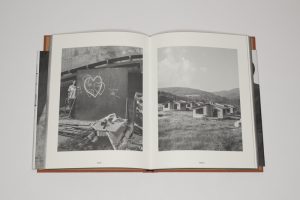 The book takes the viewer through the aforementioned ideas without ever feeling or looking didactic (which would have been that huge pitfall here). There’s a surprising variety of photographs, which allows for the inclusion of images that simply on their own would fall flat. And there is that human aspect of the work that’s so important, the grimy and brutal hand work, the aspirations of a home… I didn’t think the book would allow me to discover a lot more in the work (which I had seen, in all kinds of variations, many times). But it did.

Printed in a relatively small edition, unfortunately the book is almost sold out. I’m usually not too eager to review books that are sold out (or very close to it). As much as I like to give credit where credit is due, I also feel queasy about a photobook market that all-too-often is interested in the commodity more than the enjoyment it can provide. But when I last met him, Kudasz confided in me that he was considering a second edition. So this article isn’t merely a review. It’s also a plea to the artist to produce that second edition as quickly as possible. Rayon Vert and Human are by far the best photobooks I have seen in a long while, and it would be a shame if one (or both) were not available for a larger audience.