Photography is a cultural practice. It is what connects us with others. Capturing very brief moments in time, it leaves them to be looked at in the form of an image on a wall, in a book, on a computer screen. It is the significance of the capture, the act of trying to preserve something that cannot be preserved, along with the act of sharing it that gives the medium its almost magical power. This is why photography can never be and will never be dead or over – unless we decide to do away with our culture and society as a whole, to become isolated hermits.

Sometimes, it’s hard to remember that we’re not isolated hermits. Go to New York City, for example, to meet what it looks and feels like when you’re embedded in a group of people who all pretend they don’t want anything to do with each other. The city’s unique atmosphere in part derives its energy from that, or rather from the fact that at the end of the day, we’re not hermits, that however hard you try you will not get away from having some connection with others. Given so much of photography was defined in New York City (through curators like John Szarkowski or writers like Susan Sontag), large parts of our thinking around the medium contain this push against and pull from others.

The push and pull might be most obvious, and most powerful, in portraiture. You look into another person’s face, and you know you’re not a hermit (and if you think you want to be a hermit, then maybe you just can’t stand the fact that without the pull, there’s no push). The history of photography might contain a lot of ways of dealing with the portrait, of using the portrait for all kinds of purposes; but it also is merely a short blip compared with the many thousands of years of humans looking at other humans. In other words, however much artifice you pile onto a picture of someone’s face, ultimately, we still view the image as that other person – and not just as a picture of her or him.

This means that in order to show us something about people, all you have to do is to take their portraits. It’s that easy. Even if we assume that all portraits are created equally – they aren’t, but that’s for later – they aren’t all equally good. Some move us much more than others. Some photographers manage to take much better portraits than the rest of us. How do they do it? When you look at portraits such as those taken by Khalik Allah, the most recent photographer whose work had me think long and hard about portraiture again, there is something very special present. What is that? 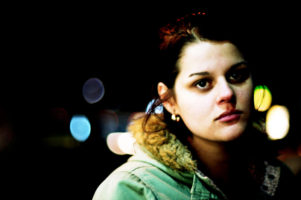 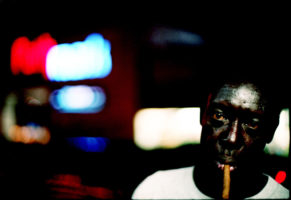 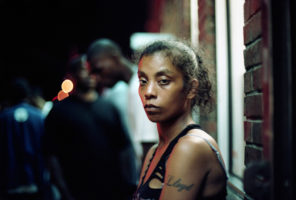 For a start, these portraits all very clearly remind us of what photography is, what photography needs: light. Without light, there is darkness. Without light, there are no photographs. The photographs are all taken in New York City, in Harlem, on Lexington Avenue, around 125th Street. They’re taken at night, without a flash, using a film camera. The tools never make a photographer, yet at the same time they do: if you want to photograph people at night, using film without a flash, you have to be able to use what little light might be available. You have to be able to photograph people in the light, get people to move into the light so you won’t just have darkness.

Khalik Allah describes his practice as Camera Ministry: it “is bringing light without a flash. Entering dark spaces of the mind and looking at them. That’s the only way a problem can be resolved: by looking at it. Not looking is how problems are preserved.”

This puts the finger right where it often hurts: to photograph means to look, it means making people look at things they might not want to look at, because it’s just easier to ignore inconvenient truths. This is why photography often is deemed to be exploitative or cruel. It’s not because there’s anything to the act of photographing that is inherently cruel, it is because it’s the existence of photographs of things we’d rather not look at that we’re reminded of the fact that, well, we’re trying to hide something from us. Photography can force us to face realities we’d rather avoid.

In portraiture, photography can make us look at other people we’d rather not look at. We might have all kinds of reasons why we don’t want to look at them, some benign, others not. But I want to think that we owe a lot to those photographers who make us look anyway, whether we want it or not. More precisely: photographers who give us the option to look, the option to learn a little something, the option to realize how the culture/society we’re embedded in contains a bit more than whatever little bubbles we prefer to surround us with. That is, after all, the sign of a healthy culture: it wants to expand, to include more, rather than less.

(Are we still living in a healthy culture?)

Khalik Allah’s Tumblr is filled to the brim with photography. The amount of work is staggering, and anyone familiar with the history of photography will be able to make some connections. Photography concerns aside, what really had me spend a lot of time with the site was the fact that there are so many good pictures, pictures that couldn’t have been made if the photographer didn’t care.

I don’t know whether it’s ever going to be possible to come up with a recipe for portraiture. But it seems obvious that you need one key ingredient: You need to care about the people you photograph. If you care about your subjects, you want other people, your viewers, to care as well; and this will show in the work, as it does here. Khalik Allah cares. We should as well.

For those interested in watching a video about the work, this one is a good start.