A young girl and boy go about their business here, or rather their businesses since they’re clearly different: The young girl is busy with the laundry, while the young boy is eating what looks like a chocolate bar. The telephone/electricity pole in the very center of the frame neatly divides the two realms. These two act like a stereotypical and old-fashioned husband and wife, but given their ages this cannot be. So something is a bit amiss.

Closer inspection of the scene reveals more things that aren’t quite what we’d expect them to be. The cloth hanger is propped up next to a fence, in fact it is in part supported by the fence. The young boy is sitting on the front box of a camper, various clothes are partly sticking out of that box. There are a black garbage bag (which might or might not contain garbage, we have noway of knowing) and a wooden board next to the camper. What is more, there are various items on the ground, some of them clearly trash.

Lastly, the girl and boy are both dressed nicely and neatly, the few spots of dirt on the boy’s knees really talk more of his age – and the kind of activities boys that age tend to go about – than about anything else. These two could be camping somewhere, but why are they dressed this way? And why is the young girl doing the laundry? What’s going on here? 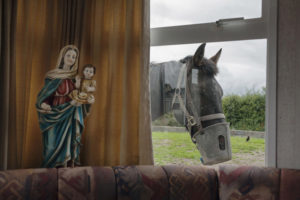 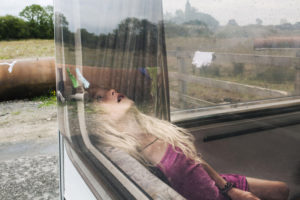 These photograph are part of Birte Kaufmann‘s The Travellers, you can find a lot more information about the project here. The moment you’re given information about a photograph, your reading of that photograph inevitably changes: You try to create a match between what you’re told and what you see. This mechanism has repercussions for how photographs work – or actually can work – once there is a caption, once there is some text next to or underneath it.

As an aside, it’s interesting how few people question information about photographs, while questioning the photographs quite a bit – shouldn’t it really be the other way around? I’ve had people email me things about pictures that couldn’t literally be true given what you see in the photographs, yet people were more insistent in the written or spoken word than what the pictures showed. We humans are very weird creatures.

Coming back to The Travellers, Kaufmann is an emphatic observer of a group of people not widely known. At some stage, I will have to come back to the idea of empathy and photography; for now, I’ll just say that you cannot be a very good photographer if there is no empathy, if there isn’t even the slightest hint of recognition – that person there, that could be me, if this and that were different, or if I were to peel away a lot of the stuff that defines me in a somewhat superficial sense.

Our differences define us less than all those things we have in common; Kaufmann’s The Travellers reminds us that it is photography, not writing, that has the ultimate power to make this clear.