One of the defining properties of our current era is the fact that the most pressing problems we’re facing are either being ignored by our elected leaders, or they’re merely used as political pawns in their electoral schemes: climate change, the pandemic, the vast inequalities that exist both within our societies and between them, and the fact that hundreds of thousands of people have become migrants (or refugees) looking for a modicum of safety and comfort elsewhere.

Matters are being made worse by the fact that these crises are not independent from each other. In a nutshell,  migration is caused as a direct or indirect consequence of the actions of those countries that now are their target, whether it’s people escaping from war (initiated or supported, however indirectly, by target countries) or the consequences of global warming (ditto), or whether people simply want a better life than the one available back home. 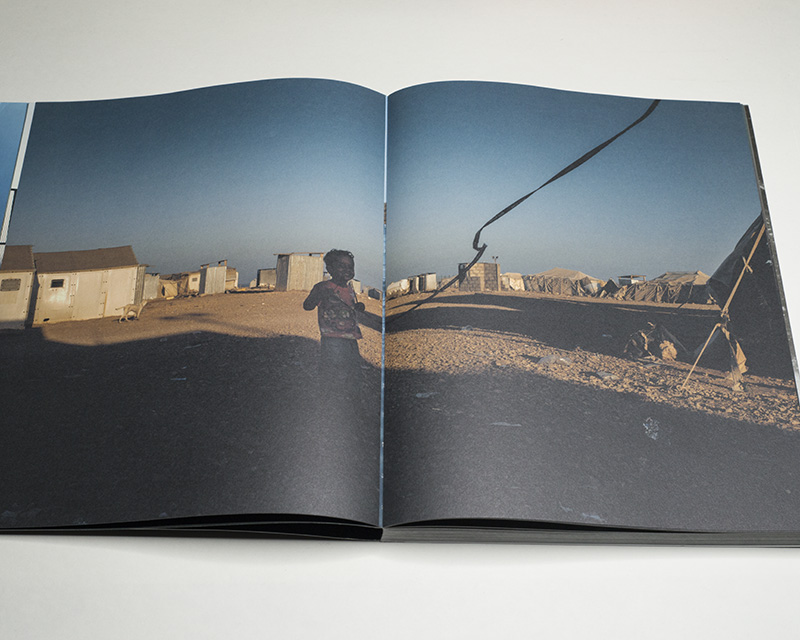 A number of photographers have picked up the larger topic of migration to make work around it. All of the examples I can think of right now are photographers from any one of the target countries. In principle, there isn’t anything wrong with this approach. These photographers typically have the resources to do the work, but they also have the necessary access to disseminate it. It’s an entirely different matter for those stuck in refugee camps, let alone on their treks across borders, to also document their plight. One example I can think of is provided by the Now You See Me Moria Instagram feed.

Thana Faroq was born and raised in Yemen, a country that has been engulfed in a civil war since 2014 (at some stage Saudi Arabia became involved, largely propped up by US support, which the Biden administration finally withdrew). As a consequence of the war, Faroq was forced into exile in the Netherlands: an incredibly gifted photographic storyteller became part of a larger story. With I Don’t Recognize Me in The Shadows, the photographer now tells that story. There’s a book that you can order here. 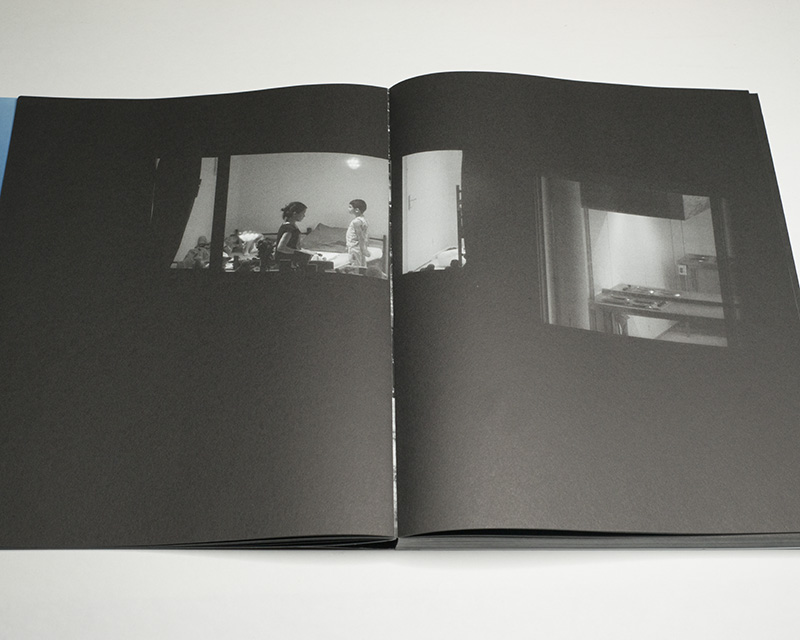 One of the reasons why I like photobooks so much is because of all visual media they come closest to being in the presence of another person telling a story. I will watch the occasional documentary film, and there are many good ones. However, they almost inevitably make me feel manipulated: I have no control over how things unfold (it feels weird to pause and rewind), and more often than not the music used is too blatantly emotionally manipulative.

A photobook removes those two aspects. Instead of being a passive recipient, I have to do work: I have to turn pages, I have to decide where to look and whether or not I will read whatever is being made available. And it’s quiet when I look. If I don’t want the quiet, I can pick the sounds that go along the book. In other words, it’s a contemplative experience, in which the thinking about what one is looking at comes along with the looking — instead of only afterwards.

Looking through Shadows, I thought it was one of the books that stressed the points I just made incredibly well. With all of its photographs presented full bleed, it immediately is completely immersive. Events are made to unfold in a number of very smart ways. For example, there are different sections that are visually separate in a simple manner. Both the types of images and whether they’re colour or black and white change. 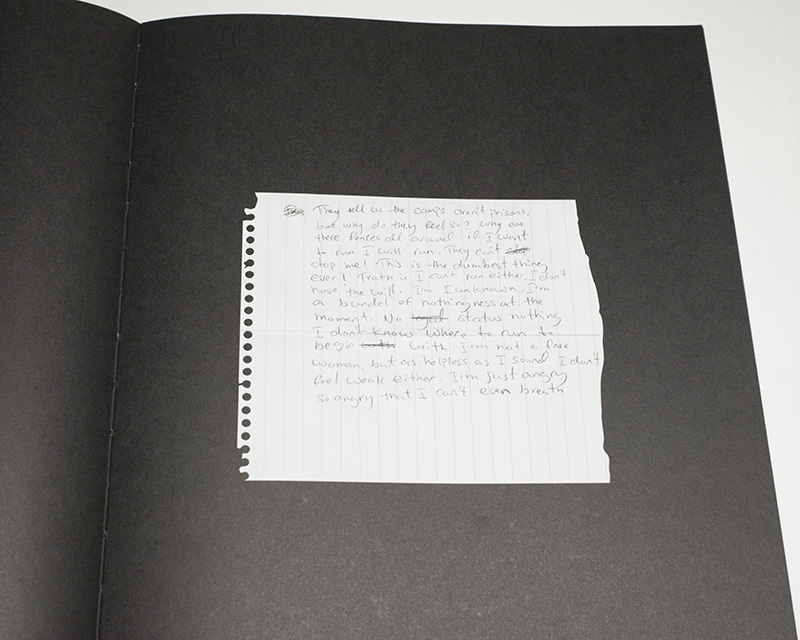 At some stage, the photographer’s own voice enters directly through the reproduction of handwritten texts on small pieces of paper: journal entries. In these texts, Faroq reflects on a number of things, some mundane, others carrying immense weight. As you go through the book as a viewer/reader, there is a build up of intensity, which finally culminates in portraits of other migrants who were photographed through a glass screen that has water drops on them. Next to these portraits, there also are pieces of paper with handwritten texts. Unlike in the case of the journal entries, these pieces of paper were physically tipped in. Underneath, the name of the person is given.

As in the journal entries, the messages can be mundane or profound — or both. “I am a human being,” one of them says (see picture just below; my own translation from the Dutch original — there is Arab text above that I am unable to read). In many ways, this is the core message of the book, a message that all-too-often is forgotten or ignored when dealing with migrants (just look at the conditions in the Moria camp): we’re dealing with human beings, human beings that have the same hopes, dreams, ideas, aspirations that we all do. 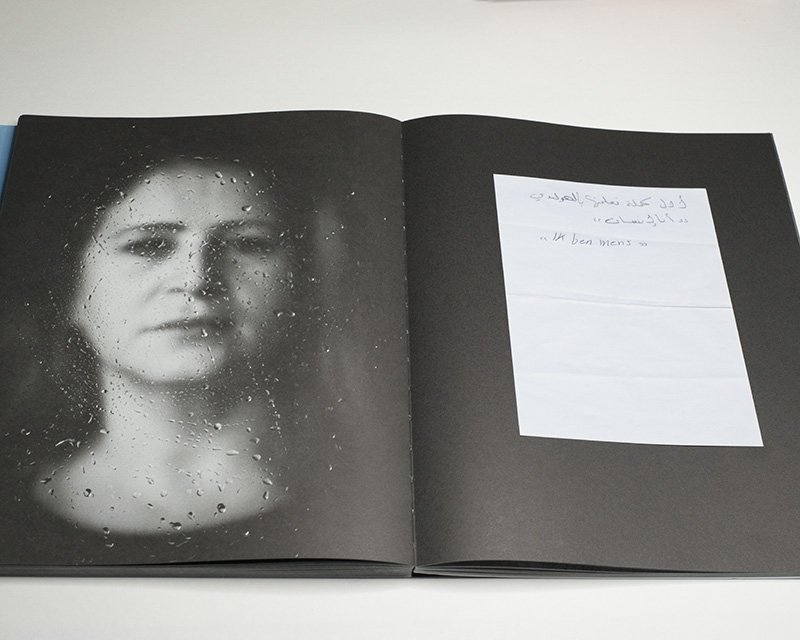 One of the most incredible pieces of writing in the book is presented at the end of the book. Entitled Two Years Later, it’s a reflection by Faroq of what happened, of being stuck in the system in place that “processes” (terrible word, I know) people who are coming from other countries looking for a safe new home.

Produced in the Netherlands, I Don’t Recognize Me in The Shadows uses all the many devices available to good photobook making without going overboard. It’s elegant and engaging but not overdesigned, and it doesn’t scream “I’m an art book”. It’s just perfect.

I Don’t Recognize Me in the Shadows; photographs and texts by Thana Faroq; short texts by a number of migrants; 168 pages; Lecturis; 2020