Given we decided to construct a culture around sex, money, and violence, we might as well live with the consequences. When these consequences are presented in the most glaring and frightening ways, David Lynch’s movies are often used as references. But their artifice does not revolve around something that flew in from outer space. Instead, they’re a somewhat uninhibited, hard look at the realities, our realities, the very realities we usually rather not look at. In other words, those movies are really just very stylized approximations of the struggle, dread, ennui, and occasional horror of contemporary life.

But movies have a hard time being taken for more than fiction, because they’re movies. There’s just too much involved, and they usually can’t help themselves with the soundtracks. You know you’re being manipulated, even if that manipulation has you look at the smoldering ruins of your own culture. There is too much artifice for things to really hit home. In contrast, photography provides more immediate access, because it deals with pictures, which we know are taken from the world in much simpler ways (even when they’re not). The psychology of the individual picture is very different.

One of the photographers who has most successfully and pressingly made work around what we’re facing is Philip-Lorca diCorcia. Whether it’s sex, money, and violence, or the dread of contemporary life, diCorcia has assembled an incredibly impressive career of photography focusing on those themes. I can’t help but think that his work hasn’t been quite as appreciated as it could have been, given his association with the flood of staged-narrative work coming out of Yale. And then there’s Gregory Crewdson.

However, whereas in Gregory Crewdson’s work the anxiety and/or ennui of the American condition always ends up being just a tad too stylized, reminding the viewer of the artifice and thus providing a way out, an opening to deal or rationalize, diCorcia has managed to keep this impulse (which also is a desire to dazzle, to amaze) under control. It’s very unlikely the viewer will find her or himself oohing and aahing over the production of diCorcia’s photographs, because s/he is made to realize that there is in fact more going on than the making of a photograph. 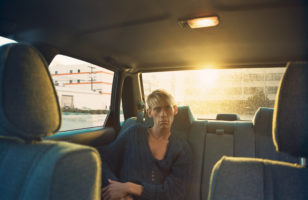 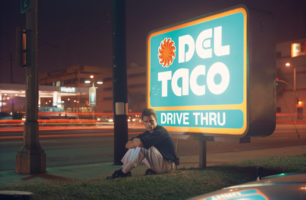 Crewdson’s work clearly conforms to the staged narrative, where it’s clear that things are being staged, and there’s a narrative (however apparent and pop psychology at times it might be). In contrast, diCorcia, while going about the same game, manages to make the viewer look past the staging; and whatever narrative there might be, it matters so much less than the feelings evoked. Crewdson makes people very conscious of the intended (scripted) feelings created by the photographs; diCorcia makes people very conscious of feeling that clearly, something is really fucked up.

Crewdson, just like Andreas Gursky, eventually pushed his artifice to the ultimate extreme, where in the end there was only artifice left. There isn’t much left to admire in his last massive Hollywood-style productions other than the very production itself, and the artist might have realized as much, going off to Italy to photograph cinema sets. In much the same way, Gursky pushed his God-like views of contemporary life further and further out, until he presented us with images of oceans, photographed from outer space, a pointless artifice that had me cringe when I saw it in person (the same exhibition also featured Photography 101 style images of oil on water). It would seem that the lesson here is that if you push your artifice further and further, there’s no escaping the dead end.

I’m tempted to think that one of the reasons why diCorcia did not fall into this trap is because a vast impetus of his work is provided by a massive amount of indignation. Just like artifice, indignation doesn’t make for good art. It’s the combination, the balance between those two, that determines whether the outcome will stand the test of time. What’s truly amazing about diCorcia is the number of superb bodies of work produced by this one artist, each showing an artist at the top of the game (not his game, the game: the game of contemporary photography), whether it’s A Storybook Life, Hustlers, Streetwork, Heads, or the most recent East of Eden. (For those who want a very good overview of his work, there is Philip-Lorca diCorcia, published at the occasion of a retrospective in Europe.)

has now been released as a photobook, in a rather massive version. Just to get this out of the way, I’m not a fan of the size (something like 17.5 by 13 inches) or layout of the book (roughly 75% of the real estate on every spread is unused). Thing is you don’t need such an overly grandiose book to present this body of work. 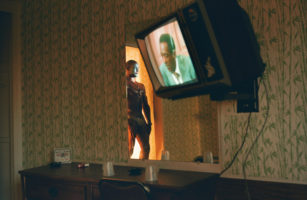 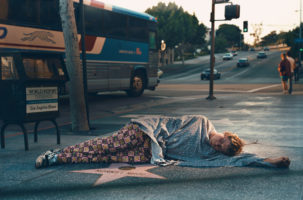 There are a few things that come up when these photographs are discussed. There is, for example, the fact that diCorcia spent money given to him by the US government, a National Endowment for the Arts fellowship, to pay these hustlers, sticking it to Congress and their “general standards of decency.” This might have been the case, but fortunately, the pictures ended up being much better than that gesture – a gesture that I can wrap my head around, even though it’s really not much more than a tit-for-tat on Congress’ level of discourse.

The photographs, however, transcend that level, and they speak very powerfully of the consequences of all those years of Congress making rules, mostly in favour of corporations, in favour of making a quick buck, no matter the cost: If a quick buck can be made by large businesses, then some of the humans discarded to the growing margins of a society ruled by greed will have to make their quick buck this way, selling their bodies, and thus not following the “general standards of decency.”

In other words, it might be obscene to take taxpayer money and to give it to prostitutes. But it’s even more obscene to create a dog-eat-dog society and to then complain about those in the dirt going about whatever desperate business is left to them just so that they can get by. And that’s in the pictures. That’s what makes Hustlers such a powerful body of photography, such an indictment of the larger culture that spawned it. It’s all about the sex and the money and the violence. It’s all right there, sex and money in obvious ways, and the violence in the form of the larger sphere that creates the boundary conditions within which for some people there is only one way to survive.

The pictures obviously aren’t documentary. I don’t think they’re even really about the people in the pictures, the fact that their names, origins, and prices are given notwithstanding. That information is a red herring. The photographs are a fiction, much like the David Lynch movies I mentioned in the beginning, a fiction that very powerfully speaks of the society and culture it was made in, made from, and it also speaks of the artist himself, his general feelings about all of this, and his way of showing us what mess we’ve got ourselves into.

Seen this way, there’s an arc from Hustlers to East of Eden, and it might not be a coincidence that these bodies of work were shown at the same time in different places. The earlier body of work, Hustlers, has a tighter focus, at least on a surface level. Visually, East of Eden casts a wider net, with its landscapes and hotel interiors, with its small and big figures. I want to think that this new project is slightly more ambitious, and the viewer will have to be equally ambitious when viewing the work, trying to connect what needs to be connected. Hustlers, in contrast, makes the viewer’s job a little easier, as a result of which the general feeling is going to be created more immediately. Needless to say, one is not better than the other.

But however you want to look at it, Hustlers is a real classic, a landmark achievement by an American photographer having a hard look at some of the consequences of his culture. You might have to buy a bigger book shelf, but if you’re interested in contemporary photography, Hustlers is a must buy.