Ever since I realized that collage and graphic design share the same foundation — or maybe rather that graphic design evolved out of collage, I view the assembling of previously distinct elements of photographs — collage — with a heightened sense of my own reaction to it: Am I attracted to the graphical elements, to, in other words, how the photographs are being put together and interact with each other? Or am I attracted to the overall effect, the outcome of the composition?

Obviously, these two questions cannot be disentangled easily, even as answers seem self-evident when looking at particular collage artists work. If I were to pick two artists who occupy the extreme ends of the spectrum that ranges from a smart application of basically graphic design to a sophisticated piece of art that happens to be montaged, I would place John Stezaker and Hannah Höch at those ends, respectively.

Where Stezaker achieves the peak of intellectual wit, which draws attention to itself, in Höch’s case, it is the final outcome, the synthesis of the elements, that elicits attention, leaving behind considerations of what might have been done to get there. This is not to say that I cannot appreciate both — I do.

But of course, at the end of the day, I might pick one over the other, and on most days it’s the one that aims for synthesis: I’m going to have an “Oh, look at this!’ over an “I see what you’re doing here” — much like I prefer a great photograph reproduced in a newspaper over a mediocre photograph that exists as a precious darkroom print (your mileage might vary).

When I began looking at Aikaterini Gegisian‘s Handbook of the Spontaneous Other, I initially expected to be looking at something created using an essentially Stezakerian approach, based on what I initially encountered. The book is divided into a series of chapters — if we want to call the different sections that. These sections are separated through their pages’ background colours, which range from a creamy paper white all the way to black, while covering a range of colours.

The first section contains montages made from two source photographs that are placed next to or on top of each other to create mostly formal juxtapositions.  They are good, but I found that the pace with which I was progressing through the book was increasing. The second, pink, section then complicates the artist’s approach by introducing a variety of photographs, while letting loose with the arrangements a little bit. Despite the introduction of pornographic imagery, the work for the most part remains at a mostly cerebral level, albeit a very sophisticated one. 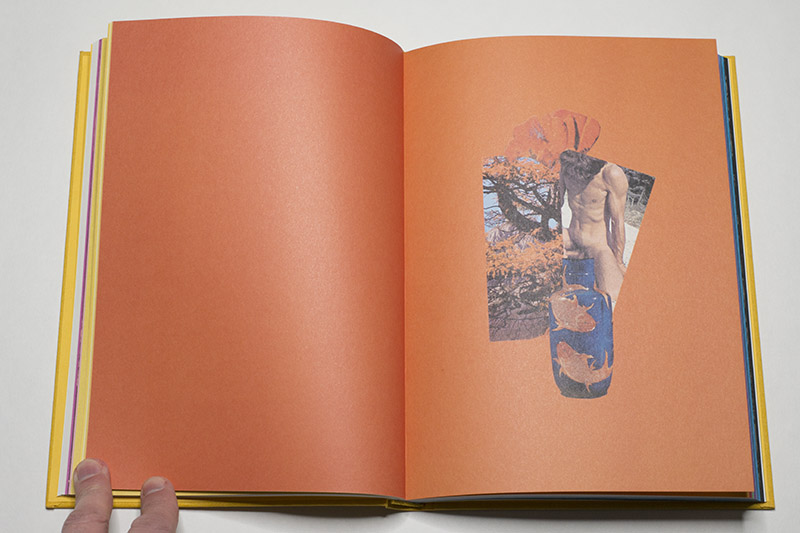 It is in the third, yellow, section where I found a strong sense of non-cerebral wit creeping in. Here, Gegisian in part abandons attempting to make Stezakerian sense in each montage, to embrace the kind of visual nonsense that in collage can make for a lot of sense after all. For example, one piece combines a colour photograph of a speed skater with a black and white photograph of a child diving and looking at some sea flora with a photograph of a cross-section of sea shell. I don’t quite understand the logic, but I like that quite a bit.

And so the book progresses, to offer a rather large number of montages. The inclusion of the pornographic material neatly unmasks the basic photographic qualities of these images: hypergraphic in purely sexual sense, they lose all their power (if that’s the right word) when placed next to other images, to actually resemble medical imagery more than anything else. I suppose nobody consumes pornographic imagery for its medical qualities, and they’re not medical in the sense that they’re made to be diagnostic. Still, there is the sense of exposure for the sake of exposure in pornography. With the inclusion of such images in the montages, these images essentially become neutered and reduced to mere descriptions of what’s on view. 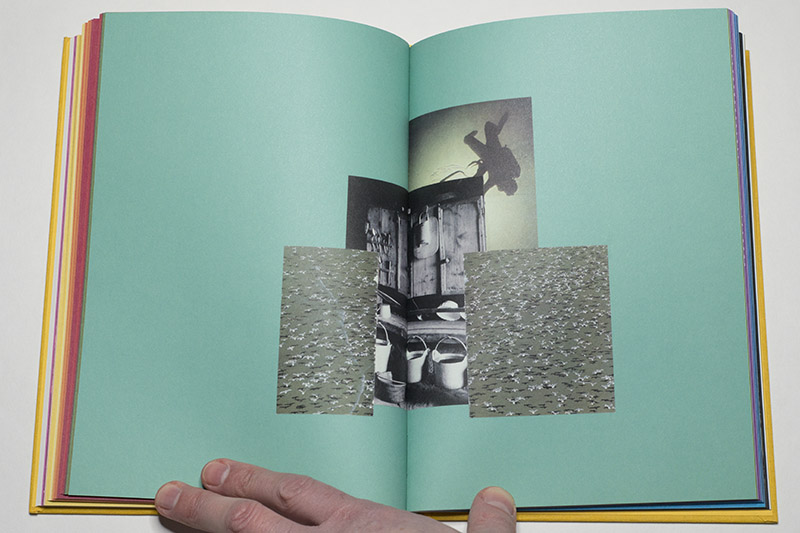 I find the placement of some of the pieces in the book a little bit problematic. They’re placed in relation to the book’s gutter, which ordinarily I’m not opposed of — if, and only if, the book will allow for spreads to easily lie flat. Unfortunately, the book is a little bit too stiff for that to happen. As a result, at times I found myself more focused on prying the book open than on the piece in question. This is unfortunate.

In summary, Handbook of the Spontaneous Other offers a most welcome take on a form of art that by now has entered its second century. Often overlooked, collage/montage has much to offer. It can make for surprising visual juxtapositions that evade the limits of what is possible in photographs and, as is the case here, it can serve to both amplify and reveal the very fabric of photography itself. Much like in a well-made photobook (but obviously in a different way) a photograph used in a collage becomes a functional element that supports something larger.

Seen this way, creating photomontages is a form of visual criticism. And if there’s one thing that could not be any clearer these days it is that the more ways we are given to interrogate how images function the better.

Handbook of the Spontaneous Other; collages and text by Aikaterini Gegisian; 144 pages; MACK; 2020