A few years after photographers started working with Google Street View (GSV), we are now at the stage where things have started to get interesting. As with every new digital photographic tool, the real question always was whether there would be more serious work after the initial wave, which was simple, one-dimensional, and thus fairly superficial (the hype being produced around it notwithstanding). Unlike in the case of “Second Life” photography (anyone remember that?), there was. Artists like, for example, Viktoria Binschtok started to engage with GSV in ways that pushed the boundaries considerably.

But much like the move towards digital photography has resulted in a strong counter-movement towards physical objects (say, in the form of photobooks), we are now also seeing examples that explicitly or implicitly push against the idea of being relatively passive consumers of robotic photography. Jim Goldberg was spotted sitting on top of an RV in New Haven, photographing people and locations. And there is George Georgiou taking the bus in London, surveying the city along its routes, and taking pictures for what has become Last Stop.

Now, whether or not GSV and Last Stop are directly connected doesn’t really matter. Given Last Stop visually operates along the lines of GSV, a connection can – and possibly should – be made. What ultimately matters the most, though, is what Last Stop tells us, and what the repercussions are for bodies of work based on GSV.

Just to be clear about this, I don’t belong to the camp that thinks photographers have to go out into the world to take pictures. It’s perfectly acceptable to gather them on your computer. But, and this is a big but, first the work has to amount to something, regardless of how you assemble it. And this is where a lot of the GSV work, especially of the earliest wave, has remarkable problems. Second, the fact that the photographer is physically absent from the scene also plays out differently for different types of work, in particular if there is overlap with documentary photography, say, whose traditions and ethics cannot simply be ignored or even thrown out (just as an aside, I often feel that artists in thrall of some new technology are too eager to have that simple fact top all concerns of their medium’s history – I find this extremely problematic). 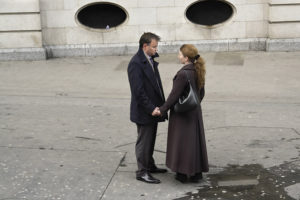 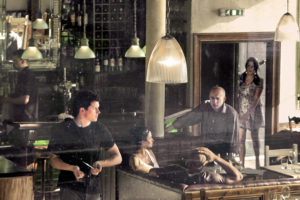 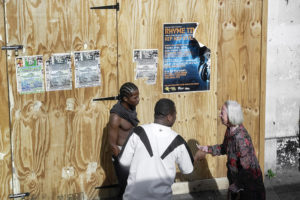 The following always is the ultimate test for any photographic body of work: does it amount to something, to anything? It’s hard, if not impossible, to predict whether it will have lasting power. But to ponder what it amounts to helps at least understanding whether it might have lasting power, whether, in other words, it’s something worthwhile getting back to again and again.

In terms of how it was made, Last Stop – which is available in self-published book form – is simple: using London’s double-decker buses, the photographer traveled across the city, taking pictures of what presented itself to him. There are photographs of people, quite a few of them, going about their business, whatever it might have been at the moment the bus passed by. And there are a few cityscapes or fragments thereof, providing context or speaking of what people who are now absent might have done before.

The book presents the work in what might be the most obvious and certainly the most appropriate form, an accordion. This folded, long strip of paper takes the viewer along on the ride, moving her or him from London’s center to what appear to be its outskirts or at least its less crowded forms. On each side, the flow of the images is changed up twice (remember, an accordion book has two sides), with images being on the “spreads” shifted. Consequently, there are short sections that flow slightly differently, that, in fact, present small vignettes of pictures playing off one another. Producing these sections was an incredibly smart decision, given it breaks the flow a little, and it drives home the point that an accordion has its own logic (my apologies for the “driving home” picture in an article on photographs made while riding a bus).

Given one can unfold parts of the accordion at any time, the sequence is possibly even more crucial than in any regular book. The viewer can decide to see two, three, four photographs at any given time (unfolding the whole beast would require a fairly large space, though). So the sequence has to work well, but it also cannot be too simple. The sequence in Last Stop achieves this goal beautifully. 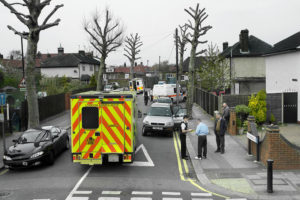 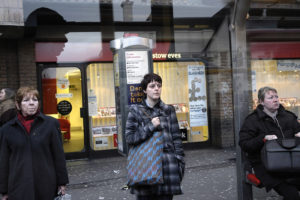 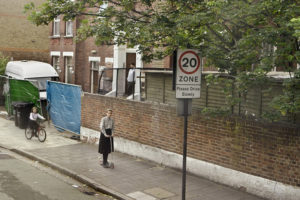 Looking through the book clearly presents a narrative of life in the city and of people interacting with other people, under a large variety of circumstances. There are sub-narratives in the work that weave in and out of each other. For example, there is a section on looking – photography effectively is a way of looking, and the section openly acknowledges this by making it a subject of the photographs.

Last Stop is a smart book, but it is more than that, given it does not aim at making its maker’s smartness one of the main aspects. The book also is very engaging, without trying to be entertaining. Not that being entertaining necessarily is wrong, but the problem with all the entertainment photography that has started to fill larger and larger segments of contemporary photography is that it’s shallow (and there’s something very wrong with being shallow). There also is no pandering to expectations (at least as far as I can see – maybe Londoners will disagree).

Instead, much like I imagine a bus trip through a city might be, the photographs reveal themselves as discoveries that, however, aren’t completely random. Now that’s a high bar to cross, and Georgiou has done it extremely well. And this then tells us something about how we can (maybe should) approach Google Street View photography.