The photograph at the top of this article is one out of 18 included in a set of slides I found (and bought) on Ebay. The slides came without any information – there is no writing on the frames. Thus, all I know about them is what I inferred from looking at their content. There are two main protagonists, a woman and a man, who might or might not be on vacation and who are very clearly enjoying each other’s company. In 14 of the photographs, they can be seen posing next to signs such as the one above, making fun of themselves in all kinds of ways. It is a very endearing set of photographs.

And yet, I wish it hadn’t been me who found it. I have been looking on Ebay for photographs for a long time, very slowly collecting all kinds of imagery. Looking for photographs on Ebay isn’t nearly as exciting as rummaging through a box of prints at a flea market. For those occasions where flea markets are inaccessible – which happens to be most of the time – it’ll do. It’ll have to do. Since its earlier days, when you could find a lot of good material on Ebay, often for very little money, the site has morphed into a poor man’s Amazon, which, however, often is way overpriced. I’m very picky and cheap, so finding something I want happens rarely.

Mind you, I do enjoy the hunt involved in collecting great images to have. But the immediate immateriality of what can be seen online, whether it’s vernacular photographs or even photobooks, doesn’t quite feel right.

There is a second-hand bookshop (of sorts) in Berlin, open three or four days a week, from around four or five in the afternoon until nine later in the evening. If they feel like it, that is, and I haven’t been able to figure out whether the “they” in question, the people who take my money, are the owners, or what their deal might be. The shop appeals to me, in part because of that. They’re clearly not in it for the money, they’re in it for something else, parts of which I am tempted to think I share.

Outside, on the curb, the shop usually has an assortment of material, in the form of old books and magazines, postcards, photo albums, and photographs, presented in the most half-hazard fashion. It’s usually quite a bit of a mess, and that makes it fun.

Rummaging through those albums or boxes filled to the brim with old photographs is a very different experience than scrolling through Ebay listings. It’s not even that I like to get my hands dirty – dirty they’ll inevitably get, given the nature of the presentation alone. But picking up an old photograph, however briefly, to look at it, to then decide on the spot whether it’s going to get bought or not – that’s very different than clicking on some link.

(Those who can’t enjoy articles about photography without references to the usual subjects can mentally add their obligatory Walter Benjamin quote here, about the aura and all.) 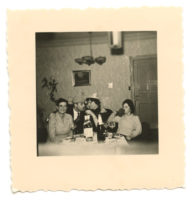 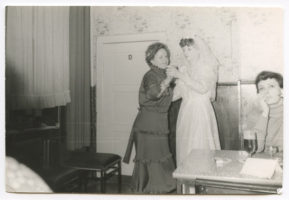 Finding something online is really not the same as finding the same thing in real life. Even where the end result is exactly the same – let’s say, a photobook is finally in one’s possession, coming across the book in a second-hand shop is just so much more exciting than seeing a listing, doing some clicking, maybe doing some “bidding”… It’s almost as if the internet has reduced the process of hunting for photography to its mere, literal essence, while, at the same time, removing all of its soul.

It’s all very functional, which shouldn’t surprise us, given the internet – and by that I mean the machinery and tools that operate behind the scenes – is mostly produced by very young people who are very bright in a very, very limited way: those people know all about software, but often shockingly little about, well, life. I can’t even blame them. When I was a lot younger, I didn’t know any of the stuff, either. I hadn’t lived the life I can now look back onto, a life filled with all kinds of pleasant and unpleasant surprises, thankfully none of which I could have foreseen. (full disclosure: I worked at such a company years ago, during the first internet bubble.)

How did we end up in this spot, where as a society we decided it would just be fine to have our lives be dominated by tools made by people who know a lot about software, but often so little about all those things said software touches? How did we get to the point where we decided it was fine if we had to change our behaviour, instead of demanding better tools that were able to adapt better to us?

Are we so desperate about photography that we need to embrace each and every new development in the tech world as if it were the manifestation of the saviour, here in the form of bits and bytes, the saviour that will finally allow us to make sense of photography again?

Did photography actually stop making sense before we started worrying that it did?

Back to what matters to me here, those objects: books and photographs. Back to finding them, or rather to coming across them. There is the immateriality of the whole process online that has drained my excitement out of the hunt.

But it’s not the internet alone. At least as far as photographs are concerned, there also is the fact that while I do enjoy finding gems like the slides made by the couple, I actually enjoy such imagery much more when it was found by other people. I have no idea what’s going on here: I have tried compiling books made with some of my own found photographs, but I rarely ever look at them. But I will spend quite a bit of time with other people’s books, whether it’s Erik Kessels‘, Joachim Schmid‘s, Melissa Catanese‘s, …

Earlier this year, I went to that Berlin second-hand bookshop twice, each time resulting in a little collection of photographs. After the first time, I bought a blank notebook and photo corners, and I made a little album. Based on the reactions of people I showed the album to, it’s quite enjoyable. For me, however, it’s now one of those many books in a pile somewhere. I collected the pictures, I made the album, I haven’t looked at it again since I came back home. I’d rather look at what other people found.

Maybe it’s because I just know so much about that little album. Given there were so many photographs to look through, I decided I’d pick a little “strategy” to make my browsing more interesting. I picked the best pictures I could find, but I also assembled a group of pictures I called “Other People’s Party Pictures” (the second time, I looked for “Indifferent Women”). Those ended up in my album. Maybe it’s because the hunt was such an integral part of the album that with it now being done, a lot of the excitement is gone as well.

When I look at a book made by Melissa Catanese, say, I have none of the hunt. I have no access to the thinking that resulted in Dive Dark Dream Slow. I only have the pictures, and they’ll do something with my mind that is not weighed down by knowing what’s going on, what the plan is, how things were put together. So there’s that difference.

I’m not going to stop looking for photographs, including on Ebay. There just is too much good photography still to be found, online and in the real world. But with time I’ve become much more aware of the real promise of “found” photography, part of which lies in the finding, the true finding that is – not the simulated one online.