Every country’s past is contested to some extent. But there might be no country as extreme as Germany. To begin with, there is history that is largely uncontestable: World War 2 and especially the Holocaust. I added “largely” in that sentence because the contesting does happen, albeit at a different level (for example, members of the neo-fascist AfD party have been talking it down, claiming it doesn’t matter as much in the context of German history as a whole). But the basic facts stand, and denial of the Holocaust is a criminal offense.

This uncontestable history is embedded in a large set of highly contestable circumstances that, again, I don’t think you can find so easily anywhere else. After all, today’s Germany was formed recently through the admission of East Germany into the West German political system, a process described as re-unification.

There were some discussions about whether the government of the newly formed country should simply remain in Bonn (where I lived at the time). The options basically were to either keep everything as is and show very openly what German reunification was all about (West Germans taking over the East), or to move things to Berlin, the seat of a number of previous governments, and create a seat if government there. By a narrower margin than you might imagine the latter option was picked.

There were some smart decisions made. The Reichstag was to be the seat of the Bundestag, Germany’s parliament (it’s the lower chamber, but unlike in the now dysfunctional US system, Germany’s upper chamber plays almost no role). It had been before, but its history had been complex.

Artists Christo and Jeanne-Claude were granted permission to wrap it first, which created a spectacular display (this fact might say something about the fluidity of the situation at the time more than about German officials caring too much for the arts). Architect Norman Foster was tasked with producing a contemporary update to the Reichstag building, which he did (I think it has aged well so far). Graffiti left over by victorious Soviet soldiers was preserved. 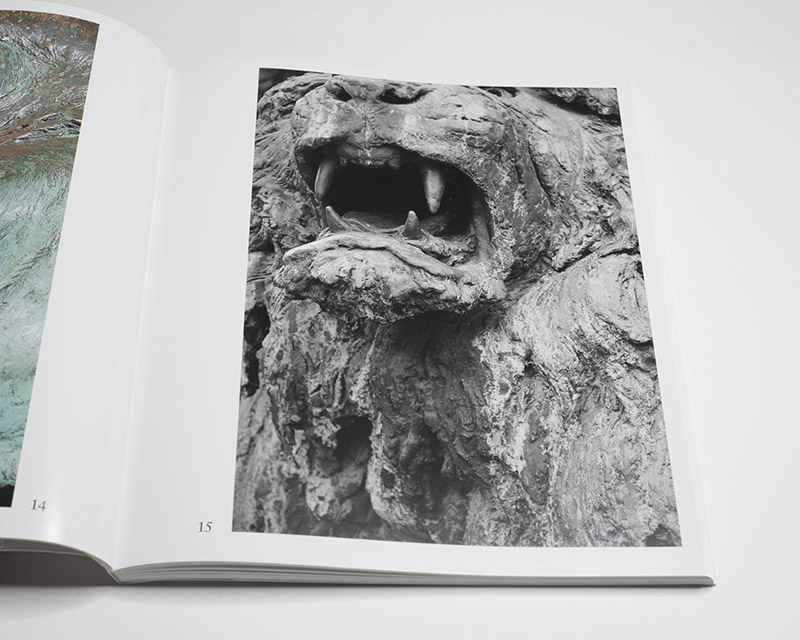 Even as at the time of this writing, the far-right AfD constitutes the largest opposition party, sitting under Foster’s luminous structure while spouting racist and neo-fascist nonsense that evokes a very different time, the Bundestag and Germany’s democratic structure as a whole have so far held up OK under the pressure of populism and the re-emergence of nasty nationalism.

Not all that far from the Reichstag, there had been another parliamentary building, the seat of East Germany’s parliament, the Volkskammer. The Palace of the Republic had been built in the early 1970s at the exact site where the Prussian king’s castle had stood. Given it had suffered extensive damage during the second World War, the castle had been dynamited by the East German (communist) government.

Due to contamination with asbestos, one of the final acts of the Volkskammer had been to close the building. It was completely stripped, and in 2003, the Bundestag decided to have it torn down — against the objections of the majority of East Germans. In its place, it was decided, the castle would be re-constructed. There would be some modifications, and it would also get a palatable name, Humboldt-Forum.

Obviously, slapping the name of two widely admired German polymaths on a structure that’s a reconstruction of a castle that had been used by the Prussian kings doesn’t solve the actual problem. It also doesn’t help the cause when the Ethnological Museum is housed in the new building — a gigantic collection of looted artefacts from the country’s colonial past. The discussions over the Benin Bronzes are just the beginning of what inevitably will be a long-lasting mess. 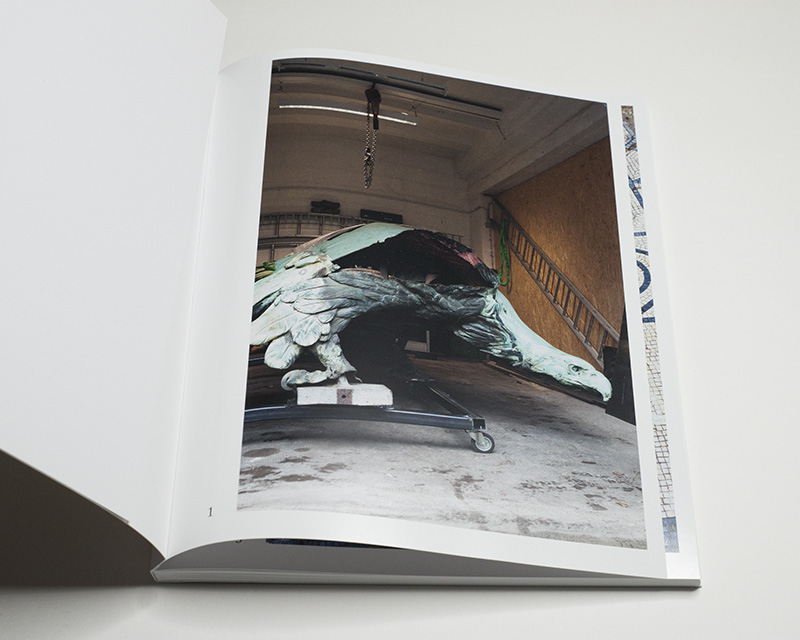 Consequently, in Berlin — as in many other places in the world — the battle over memory is a battle over stones. Eiko Grimberg‘s Rückschaufehler (Kodoji Press) depicts those stones and the way they were and are used to express state ideology.

The word Rückschaufehler is one of those compound words the German language allows to be constructed so easily. German relies heavily on nouns (hence the compound words), where English focuses so much more on verbs (so everything can be turned into a verb easily). With that in mind I’d translate Rückschaufehler as “looking back in error”.

The book is filled with a large number of marvellous photographs, many of which I wish I had taken for my own Vaterland — even as Grimberg is after something different than I was.

There’s a telling fragment in a photograph that comes very late in the book and that reveals the flawed ideology behind what Berlin has been made to look like. On page 109, a photograph shows what looks like a printed tarp over metal fencing. It’s an advertisement, showcasing some neoliberal architecture — sandstone coloured angular buildings for people who spend the majority of their time on improving their productivity, plus a young very German looking couple from the back.

This is, of course, the new Germany: it’s all sleek and clean, and people value their careers (even as earlier welfare reforms have impoverished larger numbers of people and — what do you know, karma is a bitch after all — all but destroyed the country’s previously proud social-democratic party responsible for them, reducing it to little more than a bunch of snivelling bureaucrats who cater to the urban well off). But the makers of that advert felt compelled to add these words: Von Preußen nach Europa, and right underneath in English the translation from Prussia to Europe. 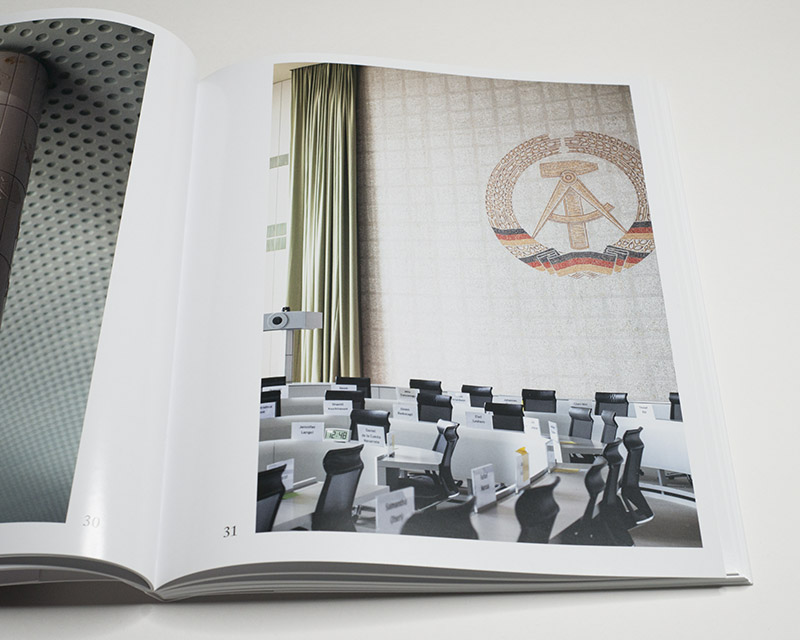 I think they honestly believed that was a good slogan, not realizing its revelatory power: there’s no way you can reconcile an imperial past with a technocratic, somewhat democratic superstructure. For sure you can’t leapfrog your way over the fascist episode that resulted in the deaths of millions and the most infamous genocide the world has seen, the Holocaust.

How or why this doesn’t work is demonstrated by Grimberg visually, using photographs of facades and stones and surfaces and statues and animals. The animals at the zoo are perhaps the most surprising element in the book. But they each are mirrored by their own representation in the service of state ideology.

One of my favourite pictures comes right on page 1: it’s an oversized bronze eagle with extensive damage to its body, sitting in some storage facility. Not quite two dozen pages later, there’s an actual eagle in the zoo. Much like the US and various other countries, Germany employs a type of eagle as a symbol for its power.

Without symbolism, architecture would be unable to express ideologies. Grimberg zeroes in on the symbolism, to get at the underlying connections and their connective tissues. It’s simple to go to Berlin and to be in awe of what’s on display. It’s a different awe than the one you’d feel in Paris, say. Grimberg invites us to replace that awe with whatever we might be feeling once we pay closer attention to the surfaces and their symbols: what ideology is being expressed here? 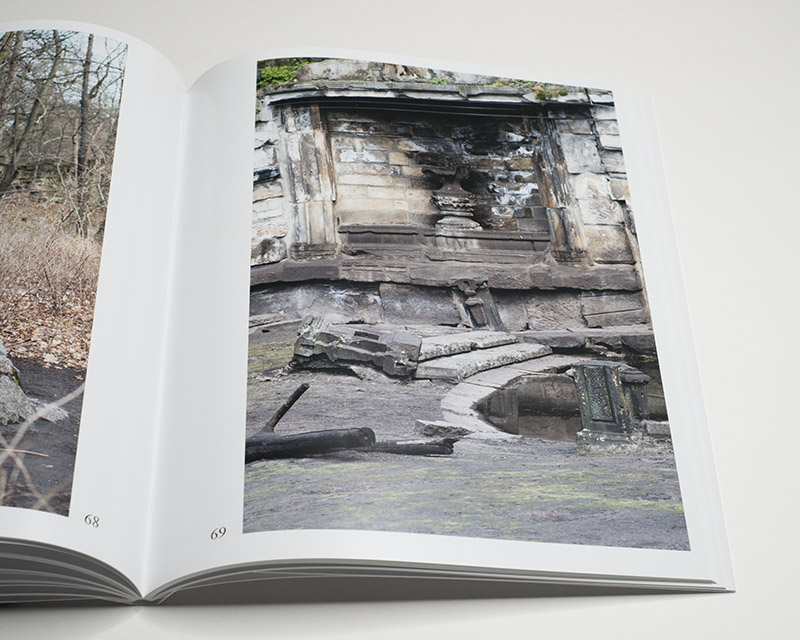 You want to look at this because wherever you are in Berlin, a few kilometers away there is an actual fight over ideology happening in the Bundestag, with what had been stashed away by German conservatives for decades now having erupted back into the open: ugly, racist nationalism, combined with antisemitism spread through codes (the codes are universal — you can see them in the US, too).

As is always the case in history, it’s bodies that bear the brunt of the fight — Germans that don’t look German enough (whatever that might even mean) being subject to racist attacks, asylum seekers seeing their homes torched, Germans of Jewish faith subjected to increasing numbers of attacks. These attacks have become so common that they rarely make it beyond local news.

It’s buildings that speak of past fights and ideologies — and of present ones. Even if when you come to Berlin you might not witness an actual physical or verbal attack, the stones are right there for you to see.

Isn’t it interesting that photography can be at its most political when it pretends to focus on mute stones and animals?